Animation Throwdown: The Quest for Cards brings your favourite animated characters into a simple card collecting mobile title. With hundreds of characters and all the TV show references that one would expect to see combined with the simple to grasp gameplay it’s worthy of a try. 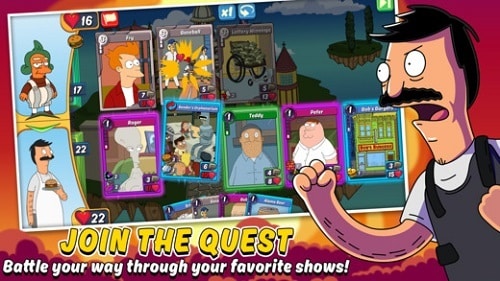 Featuring Family Guy, Futurama, American Dad, King of the Hill and Bob’s Burgers Animation Throwdown mimics the formula of similar free to play games although offers a unique skin on top. Choosing your character from these animated worlds players can play as Bob, Roger, Brian, Leela or Bobby which also influences your starting deck and cards.

Just like your character these cards bring the 5 universes together with cards like Lois, Quagmire and Chris in the Family Guy deck while your Futurama deck is packed full of Fry and the rest of the crew. In total there are 7 characters from each universe with varying rarities and stats.

Gameplay wise combat is of a simple design with players drawing a single card from their deck (minimum 25) each turn and playing one of the cards from their hand (created by drawing 5 cards at the start of the game). The primary stats of said cards are attack and health, once a cards health reaches 0 it will be removed from the playing field. 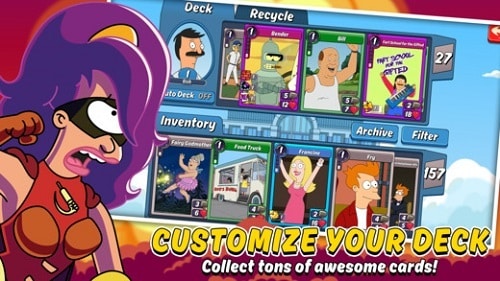 Cards played will attack their direct opposite card with any remaining damage going straight to the players character. Once a characters health reaches zero the game is won. While the formula is reminiscent of countless other games the main strategy and longevity of Animation Throwdown: The Quest for Cards lies within card research and combos where two cards are combined into a single stronger variation.

For what it lacks in depth it makes up for with humour and an extremely lengthy campaign. A fan of any of the 5 TV universes will also get an extra laugh from the game on offer.

Games Finder is a Steam Curator and featured in the aggregate review scores data of MobyGames and Neoseeker.
FEATURED ON
Games Like Deck Heroes, Games Like Hearthstone, Games Like Magic The Gathering
LEAVE A REPLY Cancel Reply

Animation Throwdown: The Quest for Cards