Follow this Age of Empires 2 Knight Rush build order to help you beat extreme AI in the AoE2 Definitive Edition or give you a foundation for your multiplayer games against other players. The AoE2 Knight rush is a popular strategy given the Castle Age power of the Knight unit that can easily defeat other units while outrunning their main Pikeman counter with some micromanagement from players. By rushing quickly to get a handful of Knights on the battlefield players can harass their opponent and deny them key resources to also advance to the Castle Age which can quickly cascade to a victory.

While you won’t be able to win every match with this strategy the Knight Rush is often one of the first strategies that players learn given its flexibility across 1v1 games against other players, team games (when in the right position) and for AI matches against the harder difficulty settings. The central mechanic of reaching Castle Age quickly that you’ll learn with this strategy is also important to a number of other AoE2 strategies that also make it an ideal initial build order to learn.

With this simple to follow build order you’ll learn how to Knight Rush in Age of Empires 2: Definitive Edition and is setup to ensure it does not require significant game skill or speed to utilise effectively to beat the Extreme AI. While there are some tweaks you can make when you become an advanced player to improve this strategy further and you’ll need to adjust it to game specifics in multiplayer it’s intended to give your initial base of game knowledge. The video below demonstrates this with a victory against the extreme AI using the Knight rush build order tactic described here with plenty of room for improvement.

What Is The Knight Rush Build Order

The Knight Rush is one of many Age of Empires build orders that provide players a set of steps to follow and provide the necessary structure to efficiently progress from game start to victory screen. While you will need to adjust this slightly for the randomisation of the map and your enemy actions your goal is focused on progressing to Castle Age quickly and accumulating an army of powerful Knight units from the stable. This requires players to quickly and efficiently acquire the necessary food, wood and gold to advance to Castle Age while avoiding taking significant losses from enemy raids and minimising the investment of resources to defend against enemy raids.

Similar to other games like Age of Empires the concept of this strategy is to quickly overwhelm your enemy with a devastating unit before your enemy can acquire their own. This gives players the option to win outright or cripple the enemy economy where it is near impossible for your opponent to recovery as you boom your economy in the background. 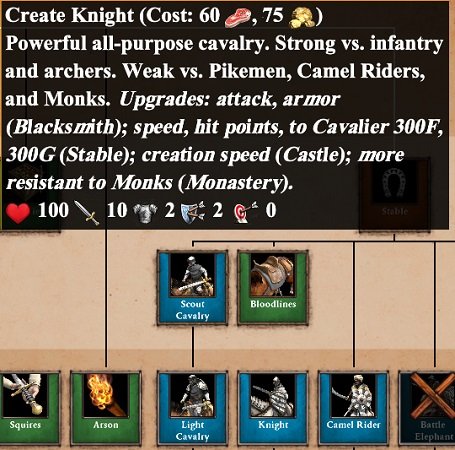 In order to be successful in a Knight Rush players will want to use the best Age of Empires 2 civilisation for the task as some have civilisation bonuses that improve the ease or effectiveness of this strategy. While all civilisations that have the Knight available are capable of performing a Knight Rush some are significantly better due to either their Knight specific bonuses, general cavalry bonuses or early economic bonuses that help propel you into Castle Age. There are also some civilisations that are better able to recover from a failed Knight Rush or transition into the late game stages as well if you fail and need to alter your strategy.

I recommended trying several of the civilisations below to find the one that best suits your playstyle and strengths with this list presented in approximate power level. 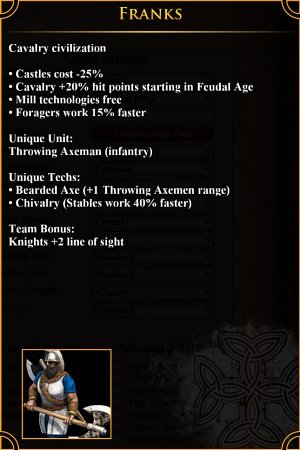 The Franks are a powerful and popular civilisation for a Knight focused strategy although this popularity does mean experienced players will be aware of your intended strategy in multiplayer. The Franks Knight rush build order is still highly effective though given the bonuses this civilisation has to execute on this strategy with boosts to economic progression and the Knight unit itself that make a deadly combination.

This makes the Franks one of my favourite options as a cavalry civilisation and particularly against the AI where the bonuses of this civilisation are highly effective. This includes the benefit of additional line of sight on your Knights to scout enemy bases easily and the additional durability on them that makes it a little more forgiving than other civilisation options in Age of Empires 2. Supporting this are the economy bonuses that give you the necessary foundation to progress with farm upgrades and faster foragers keeping you ahead or on par with your opponent without the need for perfect micromanagement of your villagers.

If your initial attack wave of Knights fails the Franks do have some backup options like cheap castles and a well rounded technology tree to adjust to most situations although they don’t excel in a particular area which means you might find yourself outclassed. 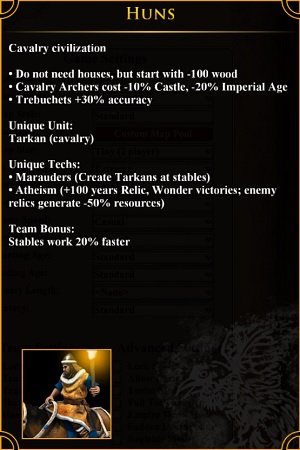 If you want to simplify your build orders in any Age of Empires 2 strategy the Huns are the perfect civilisation as they don’t have to build houses to support their units. This makes them forgiving compared to other civilisation options if you forget to build houses at the right stages and allows you to focus towards maximising your resource gathering efforts instead. This also has the benefit of saving you of wood throughout the game and particularly the early game which speeds up your ability to reach Castle Age similar to other economic bonuses that civilisations have.

Combined with a team bonus to stable production speed you’ll be able to produce Knights and acquire their upgrades from the stable at a faster rate that makes your potential Knight rush stronger and they have a few potential transitions to go beyond this if necessary. 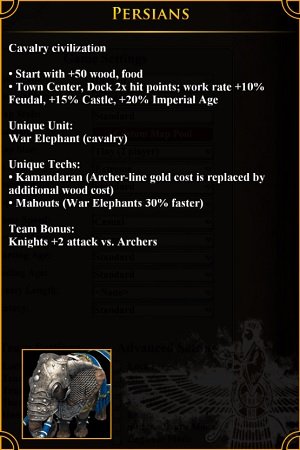 Offering a solid civilisation in their own right the Persians have town centres that have extra health and work faster that propels your progress throughout the game and something that can be utilised in a Knight rush build order as well. As if that wasn’t enough they have a food and wood starting bonus that can make any build order easier to complete as a small mistake won’t throw of your progression entirely as it might when playing another civilisation. Persian Knights specifically also benefit from the team bonus that gives extra attack against Archers which can help you counter an early Archer strategy from your opponent when the need arises.

The Persian economic powerhouse is absolutely a civilisation you should consider although keep in mind their technology tree is cavalry heavy with their unique unit also being a cavalry unit so it can feel like an all in strategy at times. The Persian civilisation does have decent archer options as a backup and your town centre bonus can generally fund this switch of strategy if required. 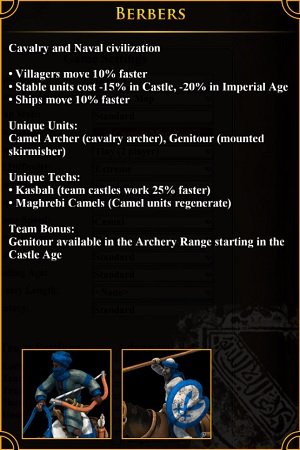 Another strong civilisation for following a Knight Rush build order based strategy to victory the Berbers offer players some economic benefits which can reduce how punishing mistakes can be. This comes in the form of faster moving villagers that can offset idle time or poor pathing decisions while also helping you avoid early raids by moving them towards the safety of your town centre as necessary.

Berber stable units also receive a cost discount that will allow you to acquire an extra Knight or two during your initial raids that might just be the difference you need for success. Given their navy focus though they miss out on some key land technology such as Halberdier, Arbalester and Paladin that make the game time after the Knight rush difficult especially when there is no water to fight over and utilise that aspect of their technology advantage. 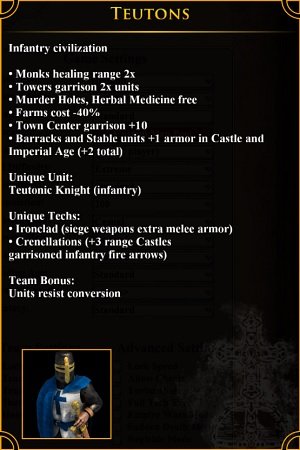 The Teutons are a capable Knight Rush civilisation that if unsuccessful can quickly transition to their infantry and defensive strength that give them a few more fall back options than most listed here. That isn’t to say they aren’t capable of a Knight Rush though with their stable units having increased armour from the Castle Age that make them durable fighters if you aren’t proficient at raiding yet. Their team bonus of conversion resistance also comes in handy given this is a key weakness of Knights although you should be aiming o rush opponents before this counter is a significant threat to your units.

The Teutons also have cheap farms that improve your ability to acquire food in the early game and results in less villagers overall acquiring wood to keep up with early game farm demands. To be effective with Teutons as you progress though you’ll need to utilise their other available units and the lack Husbandry technology does make their Knights slow like the rest of their core military options.

This summary of the build order is designed for players that are already familiar with the details or want a reference for themselves while playing. These steps should be used as a guide only and will need to be adjusted for the specific game at hand. For full step by step instructions on performing a Knight rush build order refer to the bottom of this page. 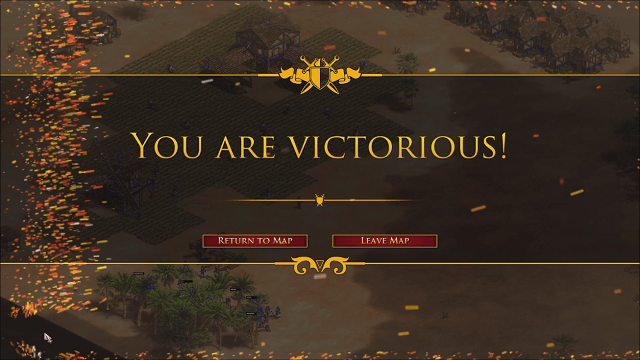 This detailed step by step build order of the Knight rush provides a foundation to take players from the Dark Age to Castle Age and create their initial fighting force of Knights to enter the enemy base to raid it for villagers and block resource gathering. These steps should be followed in order as outlined although some minor adjustments based on the map, enemy activity and ability to locate resources will be required. It includes some basic guidance on hotkeys and other tips to help beginners improve their speed and consistency. During this entire process you should always be producing villagers and your town centre should not sit idle.

Sam’s favourite game in the Age of Empires franchise is AoE 2 where he has spent thousands of hours playing against other players, completing the campaigns and defeating AI opponents. His favourite civilisation is the Franks for their ability to rush enemies with Knights, construct cheap castles and their early economy boosts.