In this armour tier list and guide we explore what is the best Tarkov armour and armoured chest rig setup to use in Escape From Tarkov. This article gives consideration to material, price and other factors while covering the benefits of each armour to help you survive more raids and use your Rouble stash more effectively.

Armour is an important tool in Tarkov and up there with using the best ammo to ensure your survival in the harsh PvPvE world. Like many other mechanics in Tarkov armour and the similar armoured rigs can be a confusing mechanic for new and even intermediate players to grasp. With over 1,000 raids across multiple resets I’ll cover the ideal options in each armour class, provide a basic overview of the best armour material in Tarkov and other factors (such as armour vs armoured rigs) to consider for your armour choice as of course it isn’t always possible to run the most expensive class 6 armour. If you’re currently progressing through a wipe and using tier 4 armour regularly I highly recommend Gigabeef’s guide on best early armours as a starting point as well:

Before considering the best individual armour or armoured chest rig for your Tarkov raids it’s important to understand how material plays an important role and is often one of the most overlooked elements when considering armour. Material of your armour in Tarkov has a direct impact on how quickly the durability decreases when shot (also known as effective durability) and how much durability you can regain through repair outside of raid which JesseKazam discusses in detail:

The Tarkov wiki referenced in the video contains the necessary information on this and is regularly updated for new Tarkov wipes and patches. Currently the best Tarkov armour materials are Aramid, combined materials or Ultrahighweight polyethylene (UHMWPE) due to their high effective durability. Steel is also popular choice as while it doesn’t have as high effective durability it does have strong repair. Reddit user pilotJKX demonstrates this perfectly in his 12.9 armour durability image.

In selecting the armours and armoured chest rigs for this best of tier list the following factors have been considered. Armour class has not been a significant factor in this guide as you should always be running the highest armour class you can afford in the majority of situations unless targeting a budget loadout for loot runs or completing a Tarkov task and accordingly this list has been split between all armour classes.

If you want to learn more about how these factors apply to all the game armours (not just the best ones featured below), the Pestily armour tier list on his YouTube channel from 2021 (patch 12.9) is the best resource: 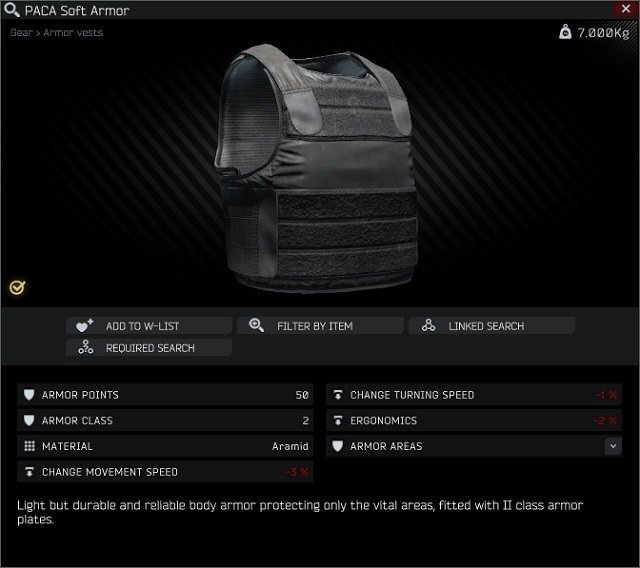 The PACA soft armour is your best bet for class 2 Armour in Tarkov although in practice should be rarely used as its ability to stop bullets is limited to shotguns and pistol rounds from Scavs. That being said it can provide some limited protection early on, is available from Ragman level 1 and a useful way to increase your trader reputation with him. A barter for lower half-masks also allows easy to access to this armour if you find yourself really struggling. Of all the class 3 armours in Tarkov the ZHUK-3 press armour is often considered to be the best given its made from UHMWPE for very strong repairs and effective durability. While it cannot be purchased directly from any trader it’s a common item on Scavs and is generally sold cheap on the flea market and not looted by most players.

While it won’t stop most players with any decent ammo in their weapon of choice it is a reliable Scav protection armour. The first armoured rig to make this best of armour tier list and for good reason this option is an everyday workhouse of the majority of players during the early to mid Tarkov progression cycle. Available from Ragman level 2 for a budget price you’ll have 12 inventory slots at your disposal and is generally considered the best budget armour in Tarkov.

The armoured rig is somewhat let down by it’s ergonomic penalties and titan material which doesn’t repair fantastically well giving players usually 2 to 3 repairs before being thrown away. A comparable rig that makes another good budget alternative is the Eagle Industries “MMAC” plate carrier (Ranger Green) that has less of an ergo penalty and has better effective durability but is only obtained via barter. The M1 armoured rig offers a significant step up over the 6B3TM above with smaller movement penalties and significantly more slots including two 2×2 slots that make it a popular PMC loot run option. The steel material also repairs extremely well ensuring you can use it across multiple raids which given its awkwardly large shape does improve the chances of it returning on insurance.

The cost of the M1 armoured rig also stays reasonable all the time due to a reliable barter with Ragman for Aquamari bottles with the price even approaching that of the 6B3TM above albeit locked behind Ragman level 3. A good alternative to this armour is the similarly M2 armoured rig that has comparable overall statistics (slightly better) and can sometimes be cheaper depending the wipe Another reliable armour steel material armoured rig the TV-110 is available for direct purchase from level 4 Ragman or alternatively a medium cost barter with level 3 like the M1 above. The high base durability also gives the armoured rig a strong effective durability that can take a beating in raid along with two 2×2 slots for your juiciest loot.

Another advantage of the TV-110 is the armour coverage is limited to the thorax so you’ll find no wasted durability on stomach shots like the other armoured rigs in class 4. For those that prefer armour vs armoured rig in Tarkov your best class 4 armour option is the trooper with its UHMWPE material, high durability and low penalties to movement. Be warned though that you’ll like pay a premium for the trooper armour due to it’s popularity so bargain hunters will want to consider the other class 4 armours first. Often referred to as the budget class 5 armour offering in Tarkov that is sold by Prapor level 3. While it can’t compete with the meta Killa class armour below due to its low durability the steel material does ensure it will last through a few raids and is rarely taken due to it’s bulky weight at nearly 10kg. The most popular of all tier 5 armours comes from the boss of Interchange, Killa and it’s easy to see why with the combination of UHMWPE material and high durability count giving reliable protection over many raids. Given the armour is only available from a single source though and can often be damaged while killing Killa you’ll have to front a large number of Roubles to obtain it.

Further impacting the cost is that this armour is extremely well known and unlikely to ever come back on insurance if any PMC comes across your body even if the armour is zeroed on durability due to the great repair possibility. It is hard to go wrong with a tier 6 armour when looking for the best Escape From Tarkov armour with the hexgrid generally being on the cheaper side due to its availability through Ragman trade and its lower durability.

However, it’s worth being aware that due to the UHMWPE material the hexgrid has essentially the same effective durability as the slick plate carrier featured below and accordingly offers the better budget class 6 armour option. The holy grail of Tarkov armours is the slick plate carrier with it steadily rising in price due to inflation and generally being a fan favourite armour mostly because of its perceived better durability and repair potential. Regardless of which of the two best class 6 armour you choose here you’ll be sure to be well protected from Scav and PMC alike.