With the best Escape From Tarkov budget guns for the early game (or just budget runs) you’ll be well equipped to maximise your profit from Tarkov raids. These best budget guns are perfect choices at the start of a Tarkov reset or even a mid progression loot run as they are cheap but also effective at taking out Scavs and other PMC players with the correct ammo in your chamber to match.

In this Tarkov gun guide I’ll cover the best stock gun options  (ignoring pistols) while offering limited discussion of the basic attachments available to improve them further. Given these sights, grips and silencers can add significant cost and are unlikely to be available during the early stages of your account the intention of this guide is to predominately focus on the gun in a stock state which is particularly important for Tarkov early weapons.

Other factors such as cost of ammo and weapon availability are also considered to provide a balanced opinion on the best Tarkov early wipe guns. Having played through several Tarkov resets to date and being poor at many points in the process I’ve relied on these weapons for hundreds of raids with my full first attempt stats at the bottom of the page, these Escape From Tarkov best early game weapons are also effective for the beginner player though and can be combined with offline mode to master these basic weapons. 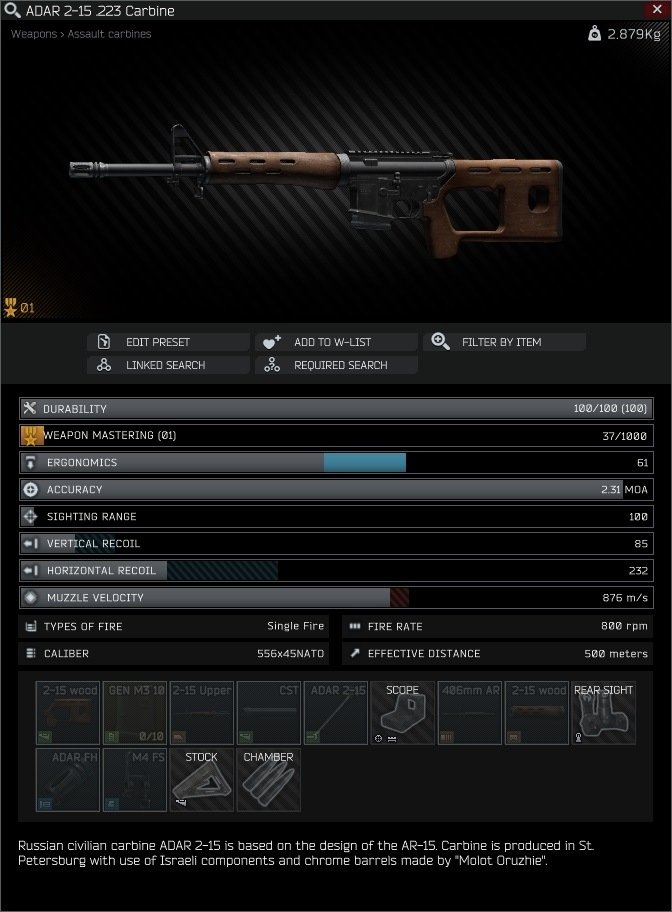 Starting off the list of early budget guns is the ADAR thanks to its strong availability and large standard 30 round mags that make it a reasonable early game weapon. It does lack the full auto power of other guns on this list though which combined with the weaker ammo puts it in a weird place overall in the meta as once you’ve got the powerful ammo you’ll likely move to it’s full auto cousin the meta M4. 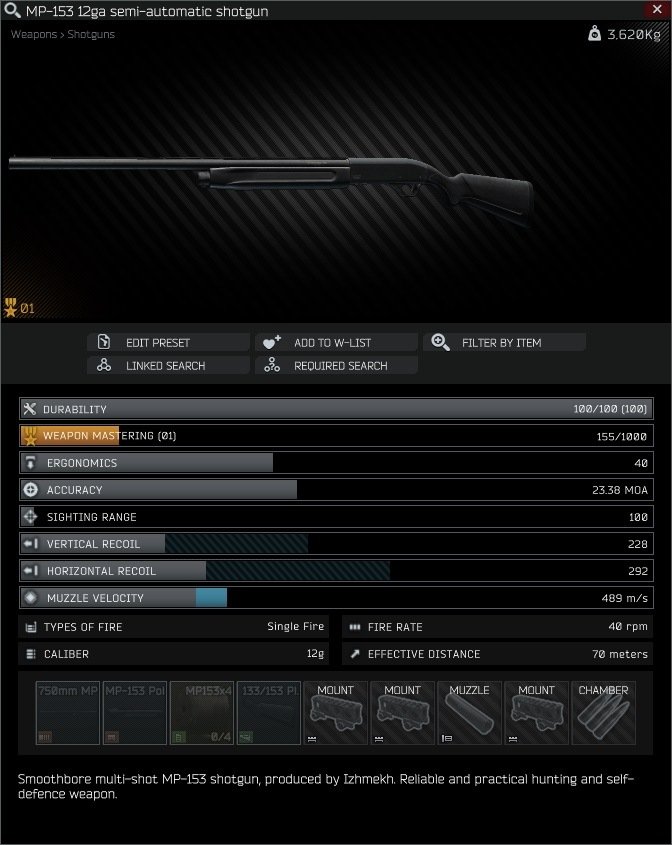 Shotguns are surprisingly effective during the early stages as players often run without armour along with the focus on Scav farming in the early game. This makes them viable as an option to take off your own Scav run and hunt for Scavs cheaply with the hope of multiplying your gear. Of these the MP-153 is the best budget shotgun in Tarkov although the Mossberg 590A1 is a close second.

While the MP-133 is often equally effective the need to collect these for early quests means and the fact that they are pump action means these are better used elsewhere. With the limited range compared to other options on this list though and the quick pace that they fall out of favour shotguns are really only an option for certain maps or Scav protection only. As slugs (such as AP-20) become available in late game though you can return to shotguns if you wish with some Escape From Tarkov quests even revolving around them. Submachine guns like shotguns are often surprisingly effective and overlooked by players who haven’t experienced a low level PMC population setting in Tarkov before. The PP-19 is one such option in this weapon type and here primarily for magazine capacity and it’s easy to access barter trade. Another submachine gun that offers one of the easiest early game trades making it a regular and effective early weapon. The MP5 is also a favourite over the PP-19 noted above as the trade comes with a full magazine of ammo and a unique 3 burst mode that can be an effective middle ground. 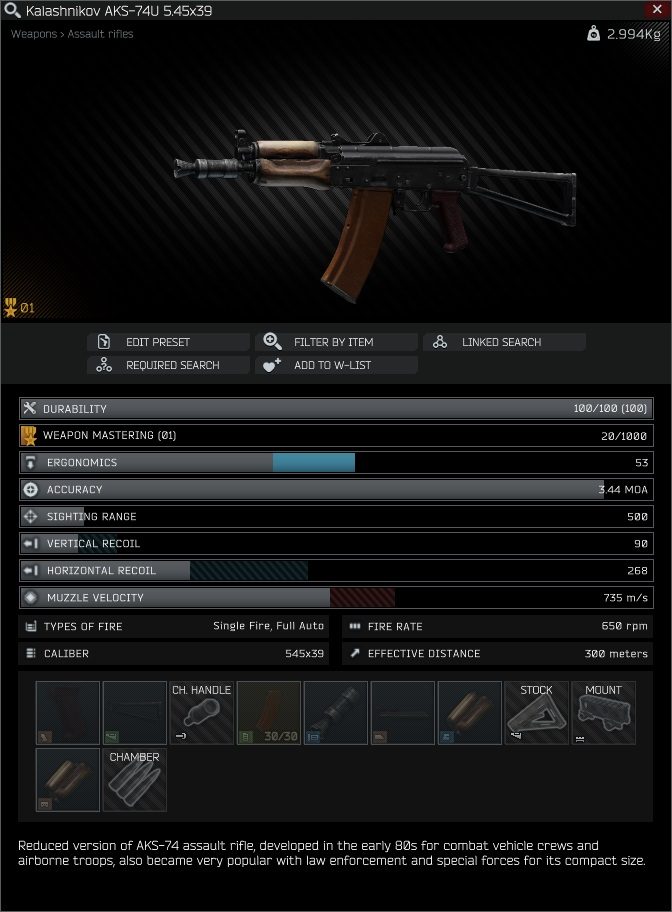 Escape From Tarkov has a huge number of AK variants that have slightly different statistics and uses in your Tarkov raids. For the early game though the AKS-74U is one of the stand outs and can be bought directly after finishing your Debut quest for Prapor or acquired in abundance from Scavs. With some of the cheapest early game modifications and silencers the AKS-74U in your inventory can quickly become a deadly option and also allows you to begin leaving that all important assault rifle and recoil control skill for the late game meta. 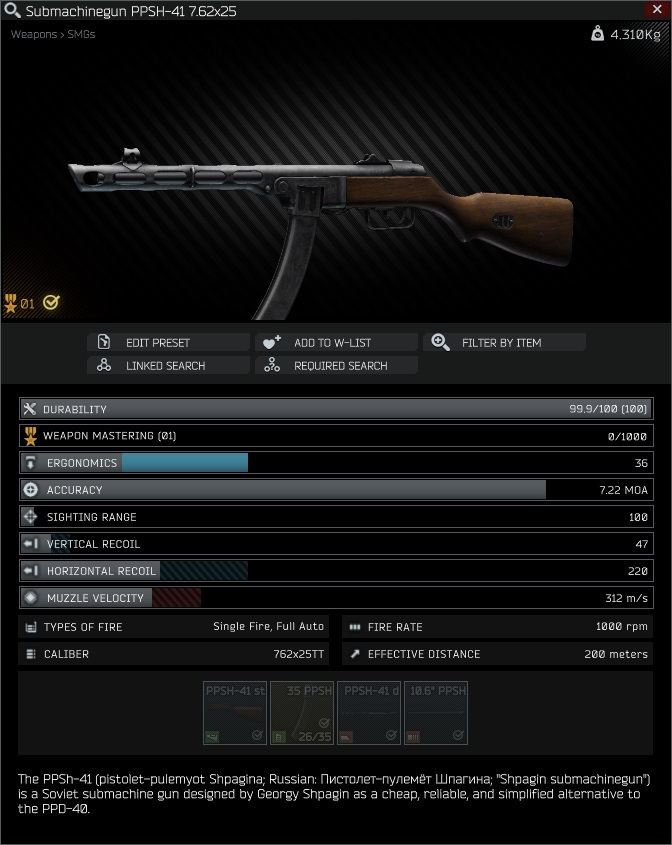 One of the newest guns on this list of best budget guns the PPSH-41 adds another Russian favourite to the Tarkov gun pool just prior to the 12.6 patch. The sheer fire rate of this gun is terrifying to face and can slice through opponents with lower tier armours (or lack of armour) during the early game.

The biggest con though is bringing in enough magazines to use the PPSH effectively which means a large rig is a must and will push up the cost of your broader Tarkov kit. With some repacking of mags and stealing of guns from Scavs and PMCs though you can often ditch these to make room for loot and wait to get your PPSH and mags back through the Tarkov insurance system. 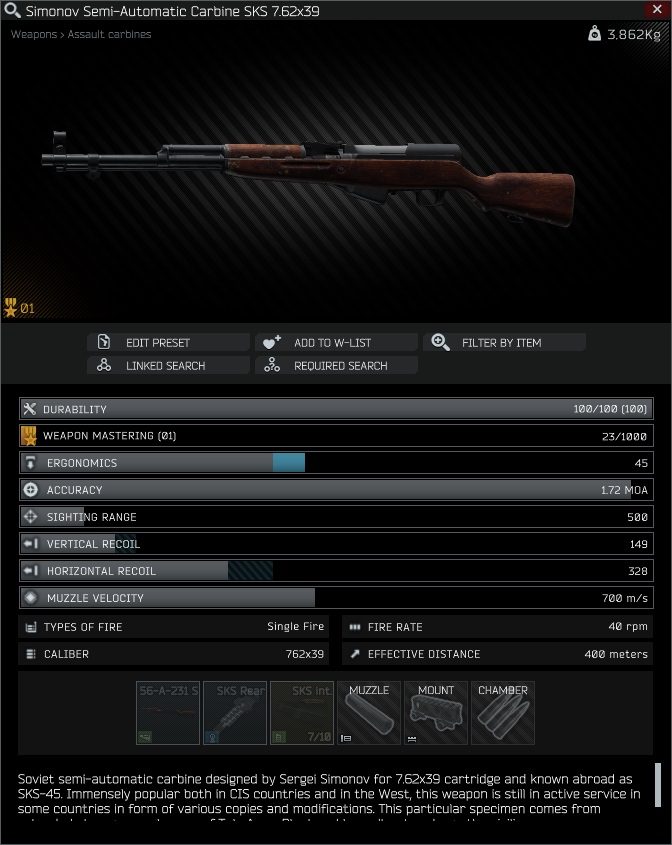 A Tarkov fan favourite of the early game that is deadly effective with the 7.62x39mm PS round and reasonable ironsights to match. The SKS (and it’s cousin the OP-SKS) bring a solid early game rifle to the table that can deliver deadly long range shots and because it comes with an internal mag allows you to bring bullets into raid through your pockets alone.

This strength is also the greatest weakness of the SKS though with slow reloading times and the limited 10 round magazine making it difficult to use effectively against multiple enemies. The OP-SKS does increase the cost a little but gives you the option to attach most scopes to give you an effective early game long range gun. Peacekeeper Level 2 is the one who sells SKS magazines though to upgrade this capacity up to 20. 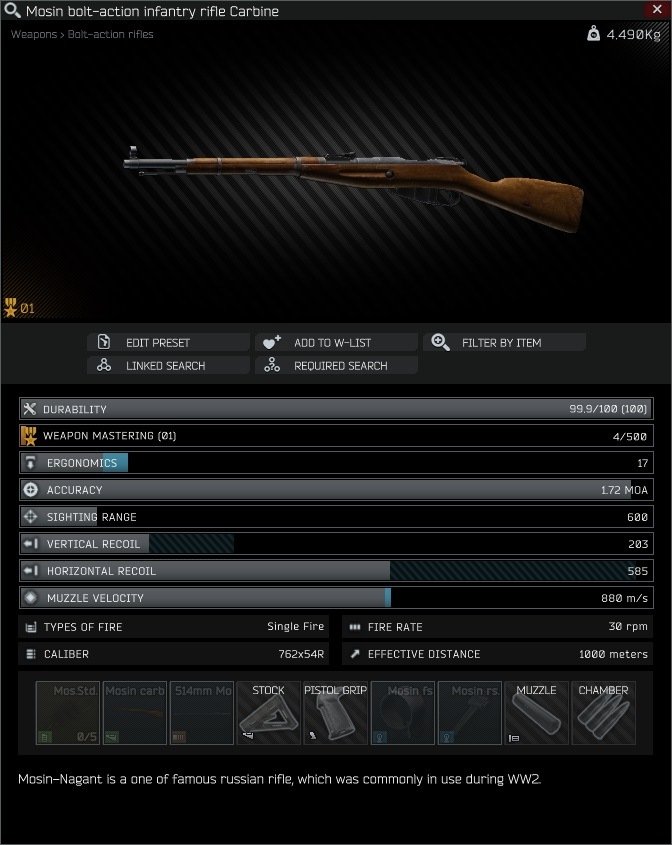 Sharing a similar weakness to the SKS but more deadly to compensate for the 5 round internal mag the Mosin is a deadly weapon from start to finish and in the right hands can be difficult to beat with its consistent one tap potential.

Cheap available ammo and reasonable number of Scav spawns ensures a steady of supply of Mosins to yourself and the market in general in addition to its Level 1 Prapor availability (carbine and sniper version requires LL2).

Available From: Prapor LL1 (LL2 for carbine and sniper) 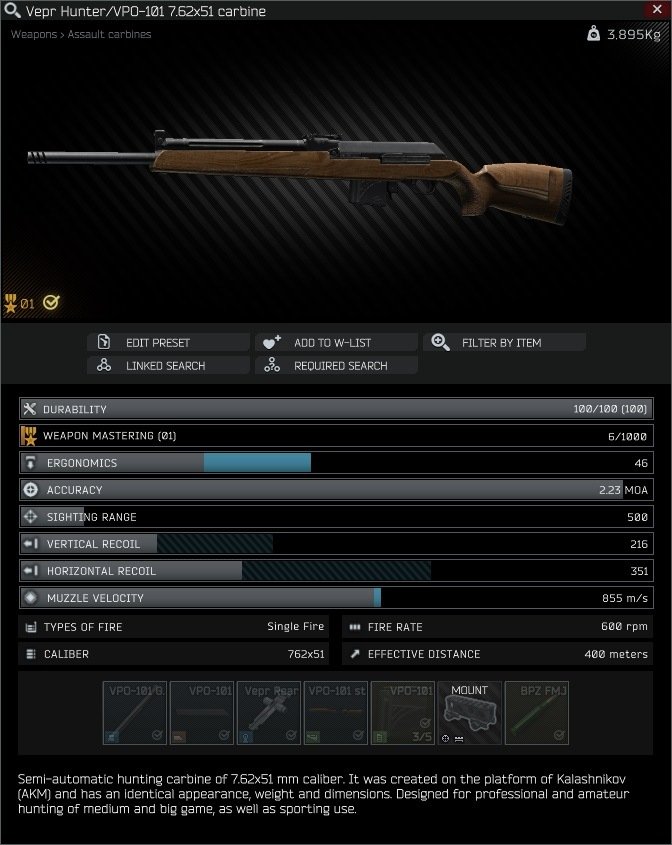 Another deadly weapon with both iron sights and attached optics is the Vepr Hunter or VPO-101 that gives you one of the few options to use the deadly 7.62×51 mm NATO round. While it can be occassionally found on Scavs you’ll need to reach Jaegar LL2 before you have a consistent source. 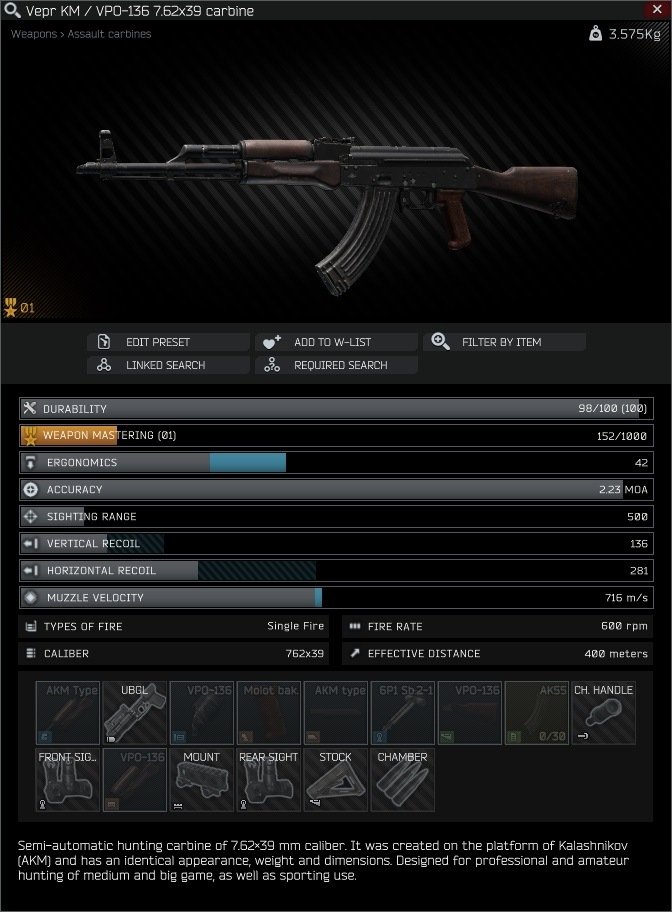 Not to be confused with the similarly named VPO-209 which is arguably one of the worst guns in Escape From Tarkov the VPO-136 is one of the great early game staples. Not only do you get the powerful PS round but the Vepr AKM comes with easy to obtain 30 round magazines that ensures you’ve got a deadly gun without limitations.

While everyone has their own favourite budget weapon these top 10 will set you up for success in your early Tarkov Raids against Scavs and players alike. Which of these Escape From Tarkov early budget guns do you take into your raids after a the game restarts?