Start using the best Tarkov helmet to protect your PMC’s head in the deadly EFT raids with this tier list guide for all armour classes. Headwear selection before raid is an important loadout consideration in Escape From Tarkov with a number of factors to consider that leave many wondering which is the best helmet to use regularly.

While not as confusing to players as ammo, headsets or armours this head slot selection still has its own interesting quirks that need consideration and will change based on your budget, preferences and raid objectives.

In selecting the best Tarkov helmets for this tier list I’ve considered the following factors before including it on this list. Like many mechanics not everything has a simple answer and while armour class is an important factor (the list below is split based on this) it needs to be balanced against other factors in order to determine how effective it is.

The Pestily helmet tier list does a good job of considering most of these factors in 2021 and is a quality video resource that I recommend watching alongside this written guide that goes further in depth into some of his top picks and the underlying reasons why.

Class 3 is your entry level solid starting helmet in Escape From Tarkov and before this I would not run any due to the lack of actual protection it provides and often harsh penalties associated with lower tiers. This also leaves a slot free for potential loot without taking up critical backpack or rig space on what is likely a budget run.

While I don’t recommend them for regular use some players often wonder what are the class 3 helmet with face shield and headset options in which case you’ll want to look the LZsh Light Helmet and the multi hit ballistic face shield visor combination although you cannot have ear protection with this setup. 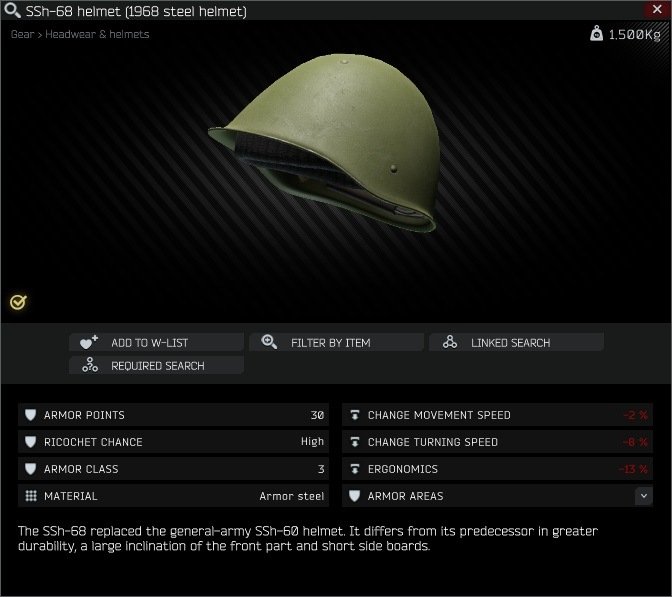 The staple of the Tarkov community is the SSH-68 and one you’ll encounter the most when playing from other players running budget guns and loadouts. Available from Ragman trader level 1 it is available early on in your progress to all players although there is a maximum purchase amount per reset.

The SSH-68 is popular due to it’s protection against basic Scav rounds while still retaining the ability to wear a headset. While it has high penalties to ergonomics the high ricochet chance keeps this ranked as the best EFT budget helmet available. 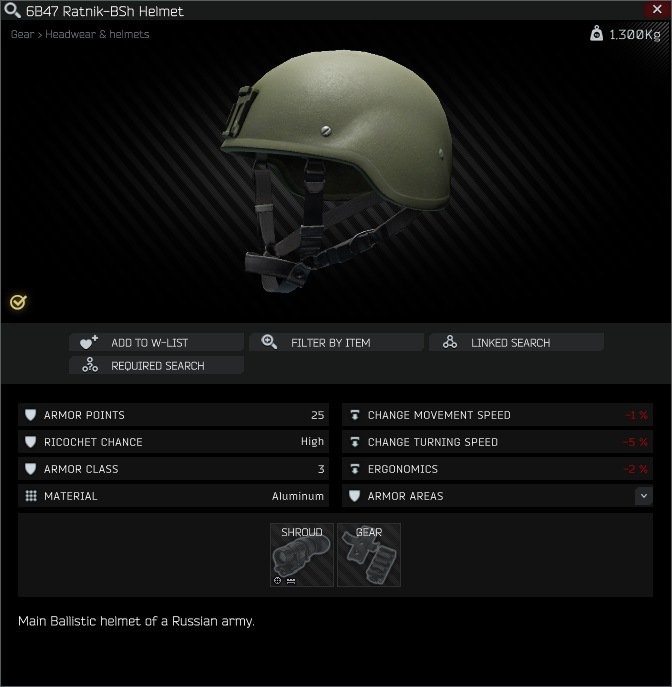 An alternative in class 3 this is also available at trader level 1 (Prapor) and adds ear protection along with reduced penalties compared to the SSH-68. The primary reason you’ll be opting to run this over the SSH-68 though is the mount that makes it an ideal option for a helmet with night vision compatibility. It can also be a viable option if you can’t buy any more SSH-68s or simply want to level an alternative trader.

Whether you’re doing loot runs at night time on empty Tarkov servers or completing some of the night time quests of Tarkov this is a solid budget option. While not a regular suggestion the Kiver-M can be surprisingly effectively in the stages following a game reset due to it being one of the first headwear items you can acquire that can use a face shield (also class 3 armour). This means PMC’s with pistols, SMGs and shotguns drop significantly in risk as you’ll be able to survive a few bullets from these calibres which dominate the early Tarkov wipe meta.

Beyond this point though I would not be running a KIVER-M consistently as you lose the ability to run a headset and that simply is too large a disadvantage.

For price to performance class 4 helmets are in a tough place in Escape From Tarkov as they don’t offer a significant boost in survival chance against meta ammunitions but can easily be double the price of their class 3 counterparts. That being said once players have established themselves and Roubles are less of a concern many in the player base will start running class 4 as their default. This is primarily for the reduced penalties and slight chance of stopping a mid tier bullet that they might encounter. You do pay dearly for this small uptick in survivability though so I recommend you continue to run the class 3 options above when doing budget gear raids. 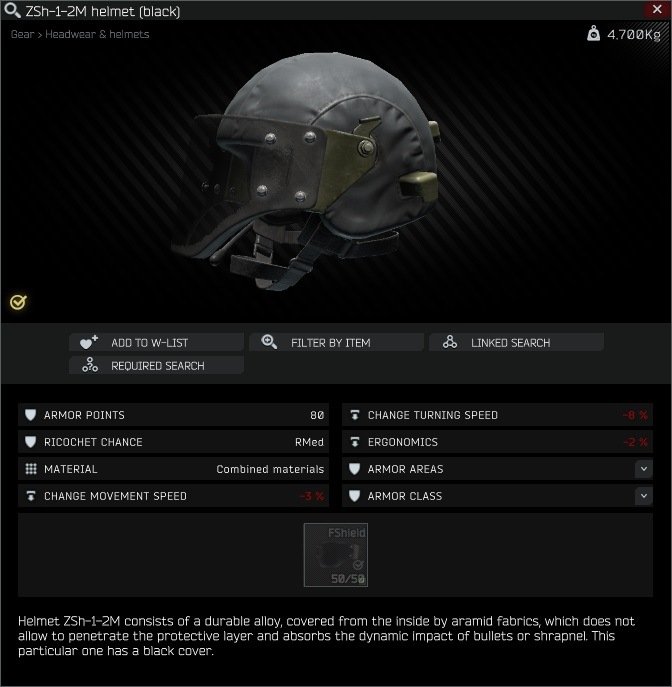 Like the Kiver-M noted above the strength of this Tarkov option lies in the early game with its face shield giving you protection against common budget ammo. If you are a veteran player that often excels above the player base and can complete Chemical Part 4 with Skier you’ll also unlock the cheaper black option for purchase.

As the average PMC advances through the content of Tarkov though and begins using higher penetration rounds the usefulness significantly drops and is not worth using beyond that. The best budget option in the class 4 category is the Ulach which is a reliable option in black and tan colours. Providing top, nape and ears protection with relatively low penalties and high ricochet chance it’s the class 4 version of the SSH-68 that many players advance to as their stash value grows.

Given these are only available at max level Ragman though you’ll generally only be making this leap around PMC level 40 when you can have affordable and recurring access to it. 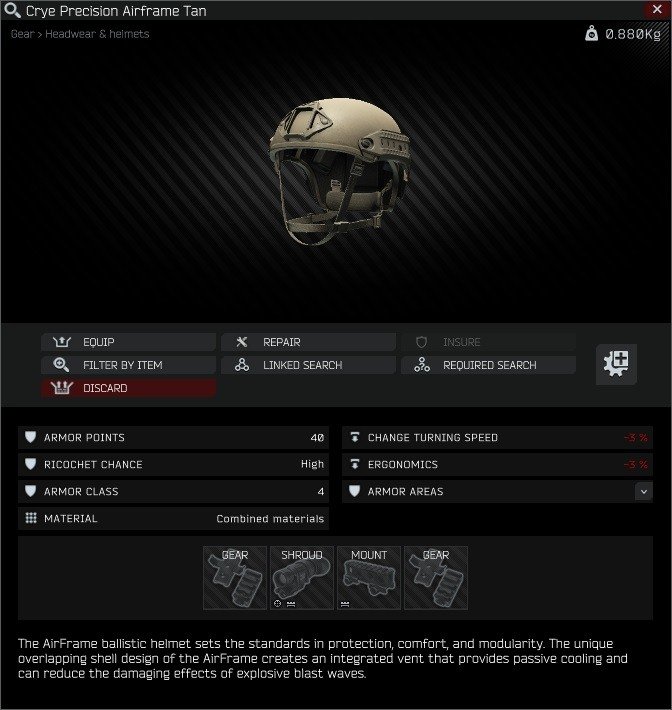 A step up in cost from the Ulach is the Airframe which has a few advantages when compared to the other class 4 helmets and generally a middle ground between the budget Ulach and the expensive black Exfil with face shield combo. The Airframe is highly customisable as far as headwear goes in Escape From Tarkov which is a driving factor for its popularity with players able to attach chops, ear and eye protection.

The Airframe is favoured for the ability to serve as a Tarkov helmet with face shield and headset in particular. The included mount also makes the Airframe a class 4 candidate for any night vision required activities that you might have. 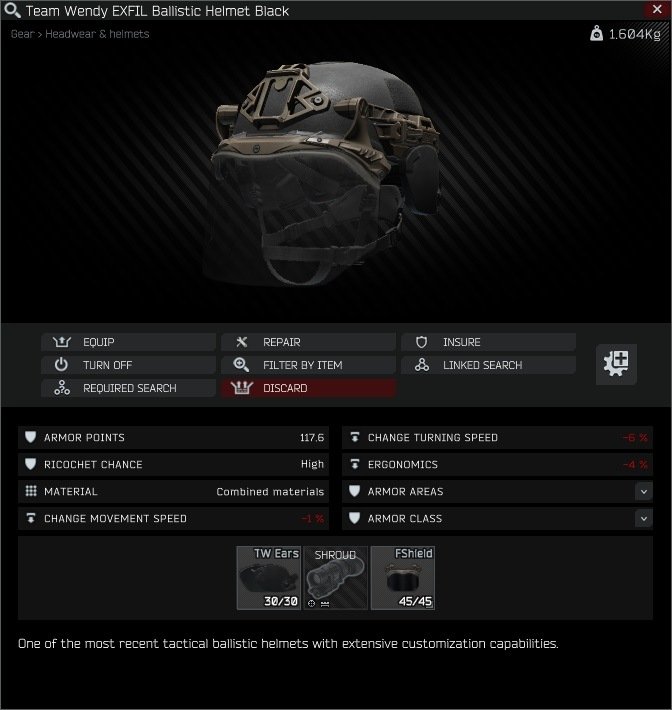 The most expensive of the class 4 options particularly if you want to run a face shield as this is limited the black variant otherwise you can expect a roughly similar expense to the Airframe for the coyote coloured version along with similar customisation. The Exfil provides plenty of protection to head and nape natively while the ear covers can add ear protection all with very low penalty modifiers and retaining the ability to wear a headset. The Exfil is generally considered the best option for a face shield and headset combination although expect to pay a high price for this setup.

While class 6 does have its uses in Escape From Tarkov their lower face shield armour levels and headset restrictions means that class 5 are generally the peak offering of helmets in Tarkov for the majority of situations. However, there are two viable options in limited circumstances that you can expect to pay heavily for but offer equivalent protection. 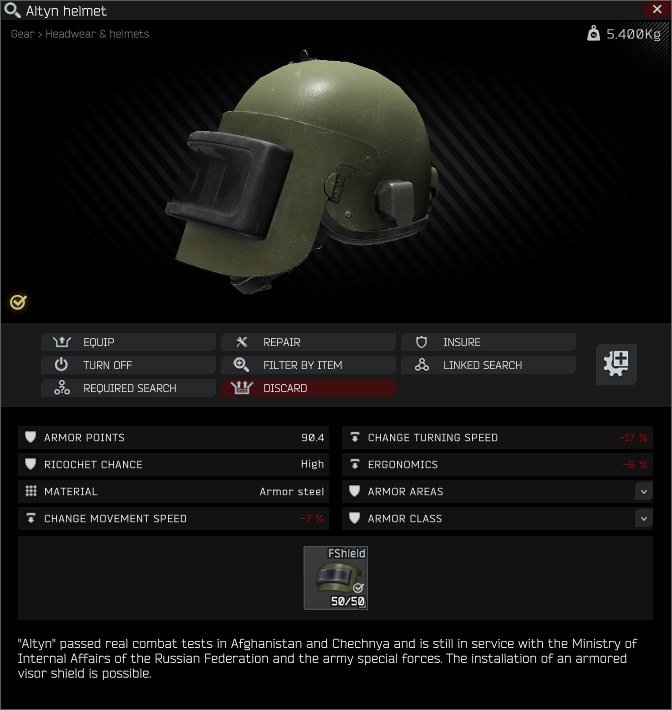 Perfect for your Factory raids this helmet offers full class 5 protection once paired with the face shield and makes it a regular sight for PvP orientated questing. However, given the lack of headset option when using the Altyn you’ll rarely want to use this outside of Factory where sounds are closer to the player and the loss of headset is not a significant disadvantage as the map is fairly formulaic in comparison to other Tarkov maps. An expensive version of the Altyn with similar benefits and drawbacks the RYS-T has the advantage of slightly higher durability on the face shield and helmet itself along with lower penalties that make it slightly more durable for the PMC that doesn’t care about the Rouble investment difference which is often double that of the Altyn on the flea market due to the required items for the barter.