This Darkest Dungeon curio guide provides players a reference sheet of all interactions with curio to help you determine whether or not to trigger them in a hero expedition. Given curio can bestow a wealth of positive effects on your heroes (generally requiring a specific provision to be used) or seriously harm your heroes knowing the right time to interact with them as you advance is pivotal to your long term survival and progression. While you can memorise them over time and the game does show you the effect of provisions on curios once you have discovered it having an interactions cheat sheet chart or table like the one can help you with that initial discovery and understand the risks you take if you lack that provision.

In this curio guide we explore all the mechanics of curios in Darkest Dungeon which are fundamental to surviving the harsh expedition difficulty your heroes will face. It also includes an interactions chart split between the various game areas for players to reference while in game. Given this article discusses curio related information there are spoilers for this Darkest Dungeon mechanic below.

Curios come in a range of forms and are interactable objects of curious nature that players encounter while on an expedition (within rooms and hallways). These include strange altars, library books, fountains, chests, piles of bones and everything in between that has been left behind by past adventurers or part of the scenario. The expedition location you select will impact on the curios you encounter which are randomly spawned although some general themed ones can be found across all locations with players having the decision to interact with them or not. If players select the incorrect provision for curio it will have no effect and once you have discovered the correct provision it will show an icon in your inventory when interacting with that curio underneath that item. For example the gold loot icon shown underneath the shovel in the screenshot below for the shallow grave curio, note that other provisions show only a question mark. 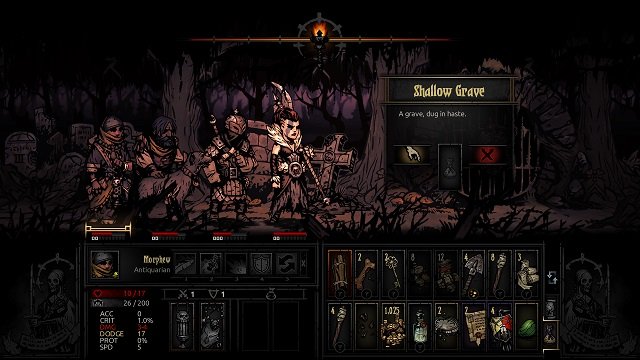 After interaction with curios within rooms or hallways players are given the choice to use one of their inventory provisions to activate the curio or ignore it entirely and continue on with the expedition. Most curios can have their outcomes improved by selecting the applicable provision which encourages players to bring specific provisions on their expedition. Players also need to be careful of negative hero quirks that may force heroes to activate the curio automatically when in range with certain quirks triggering specific curios. 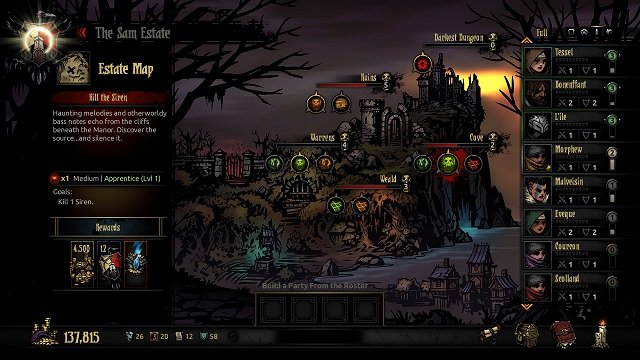 The below section details the interactions you can make with each Curio and is presented as follows. Note that the loot reward is a generic term that includes any lootable item such as gold, gems, food, heirlooms and in some rare cases trinkets.

These curios can spawn regardless of your Darkest Dungeon location with these generally having limited cleaning cleansing provision requirements and fairly reasonable non-cleansed rewards.

These curios only appear when adventuring in the ruins with holy water, skeleton keys and shovels being a recurring theme to activate cleansing.

These curios only appear when adventuring in the warrens with holy water and medicinal herbs being a recurring theme to activate cleansing.

These curios only appear when adventuring in the wealds with holy water, antivenom and bandages being a recurring theme to activate cleansing.

These curios only appear when adventuring in the coves with medicinal herbs and shovels being a recurring theme to activate cleansing.

These curios only appear when adventuring in the courtyard with the blood, holy water, torches and shovels being a recurring theme to activate cleansing.

These curios only appear when adventuring in the farmstead with only the skeleton key used to activate cleansing.

These curios only appear during unique situations with only the skeleton key used to activate cleansing.