Our Darkest Dungeon money farming guide will help players acquire a healthy amount of gold in order to succeed in the challenging roguelike adventure. With gold (or money) being pivotal to many mechanics in Darkest Dungeon having a reliable method to make money while also investing it in a smart manner provides a significant safety net for players looking to beat the game. For example gold will allow you to reinvigorate your heroes for the next adventure, improve equipment, purchase important trinkets when they become available and in general improve your hero talents.

When you first step into the dark adventure before you gold is sparse and places to spend it can feel nearly endless which leads many gamers to research the best way to make money in Darkest Dungeon. While there are many small ways to acquire and save gold the best method resolves around using the weak combat class of the Antiquarian combined with the endless supply of Stage Coach heroes to maximise gold gain. This tactic and others are detailed below to create a well rounded money farming guide for new players to reference as they progress and if applied early on will allow you to significantly improve the time efficiency to boost your overall hero power level.

Gold (often referred to as money) is a core currency of Darkest Dungeon with a wide array of uses to recover your heroes or empower them and as a result can quickly slip through your fingers if players aren’t careful. While gold can be directly looted within dungeon adventures most of your gold income will come from other loot that you acquire in an adventure such as gems (citrine, jade, onyx, emerald, sapphire, ruby), the rare puzzling trapezohedron, antiques and other miscellaneous items. As this relies on players leaving the adventure with this loot in their inventory it is possible to quickly spiral down in overall gold if you have repeated unsuccessful adventures. Other sources of gold include selling unwanted trinkets from within the trinket inventory or building the bank if players have the applicable Darkest Dungeon DLC to build districts.

While there is a small number of sources to generate gold there is no shortage of ways to spend it in Darkest Dungeon. The largest investments include buying powerful trinkets from the Nomad Wagon, removing stress from heroes, removing negative quirks and locking in the best quirks for your heroes. With other smaller uses including provisions prior to an adventure, hero equipment upgrades and hero training to ensure your heroes are best setup to survive dungeon adventures. 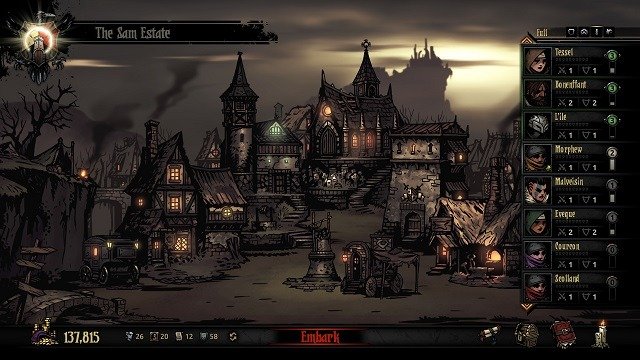 When you initially start playing Darkest Dungeon gaining money can seem like a constant uphill battle but once you understand the best way to make money you’ll have a reliable and relatively easy method to top up your gold reserves whenever you want additional gold resource. The methods I recommend to farm gold in Darkest Dungeon in approximate order of efficiency are:

The foundation of acquiring gold in Darkest Dungeon during the early game is utilising the weak Antiquarian class on your dungeon expeditions or if you have none available sacrificing some fresh heroes from the Stage Coach instead. This money farming strategy means that all early investments in the Stage Coach are critical as you’ll have a wider range of heroes to hire and occasionally some at higher level. The Antiquarian is important to this strategy as this hero increases your maximum gold allowed in each inventory slot during expedition and also finds minor and rare antiques from battles and curios (Antiquarian must be the hero to activate a curio) that significantly improves gold gain per expedition.

Both of these methods rely on players hiring new recruits and throwing them at an expedition with little care for their survival before dismissing them when you return to the Hamlet (either through success or simply fleeing when things look bleak). For this reason generally explore based expeditions are best given fighting is unlikely to be a strength of this team composition. Not only does this path save you money on curing the stress they acquire it also allows players to tackle an expedition with a low number of supplies and spend a majority of the time with low torchlight which increases loot gained.

As you progress and naturally build up a few powerful Antiquarian heroes you’ll be able to shift your focus more on survival of the party and also allows players to use some different tactics such as investing in provisions to maximise curio gains, scouting trinkets to optimise your route and manipulating light throughout the expedition. This torchlight manipulation has players drop the torchlight down to 0 at the end of each fight when there is only one enemy left (or before curio activation) and requires you bring extra torches to compensate. Alternatively some players may prefer to clear an entire dungeon without activating any curio before dropping the torchlight down to 0 and backtracking through the dungeon for each curio with enhanced loot from the low light level. First introduced in the Crimson Court (CC) DLC and later enhanced with The Colour of Madness (COM) DLC the District area provides players with another location to invest their resources with a number of having positive impacts on your ability to generate or save gold. Of note is the Bank (CC) that allows players to gain 5% interest on any gold each week which with the above noted gold farming strategy can provide players a consistent source of gold and reduce the need to perform money runs so you can focus on powering up your core hero roster instead.

Other useful investments that will improve your average expedition loot gained include the Cartographer’s Camp (CC) which provides better loot gain at higher torchlight levels and the Geological Studyhall (COM) that allows you to stack one additional gem in your inventory slots. Equally you’ll find a number of money saving opportunities within the base game Hamlet through reduced costs. 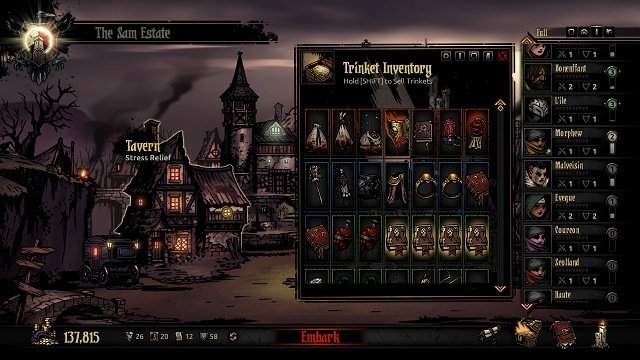 Trinkets in Darkest Dungeon can quickly build up over time in your trinket inventory and even common tier ones can quickly add up in gold value when sold. These trinkets will be obtained at a steady pace from completing expeditions and also randomly during an expedition at a lower rate. Given heroes are capped at only 2 trinkets at a time, the small number of heroes you’ll likely push through to the higher dungeon levels and there being several hero archetypes you might not even use given your own playstyle preferences there are many trinkets you can sell without impacting your adventure.

Focusing on selling the trinkets of heroes you don’t use in your parties, lower tier trinkets that you’ve already replaced with stronger variants and generally weak trinkets regularly will generate gold while also keeping your trinket inventory organised. 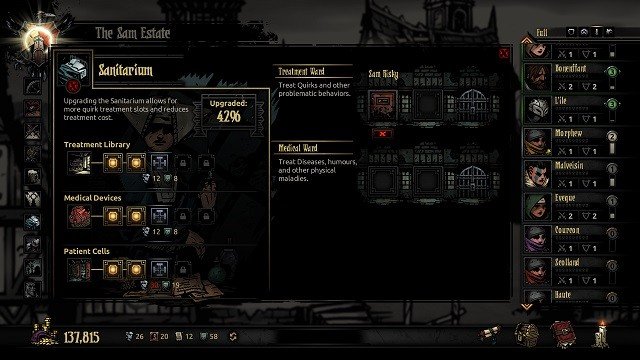 While money farming techniques are important to accumulating wealth in Darkest Dungeon being efficient with how you spend your gold is equally important. With efficient gold spending players can reduce the required amount of gold they need over the course of a playthrough in the first place and overall spend less time farming money in expeditions. These gold saving tips and strategies include: