In this class tier list we explore the Deep Rock Galactic best classes for solo and coop play to ensure you are well equipped for the mining adventures and swarm attacks that await you in the planetary depths.

With four classes in Deep Rock Galactic that have dramatically different weapons, utility and mobility it can be difficult to pick a clear winner for the best class debate. The range of mission variety also complicates the comparison further as there are some clear winners in particular mission types while being weak in the majority of circumstances.

While Deep Rock Galactic is designed with cooperative gameplay in mind the introduction of Bosco and growing skills of the player base have made solo play increasingly common place in even the highest hazard level missions. For this reason I always advocate choosing a class you like to play over all else which involves playing them all across multiple missions. Playing solo is also an important element of gameplay on your path to Deep Rock promotion for your class as you’ll be unlikely to reach this without any solo play given the assignment system encourages playing specific missions that might not always interest other players. 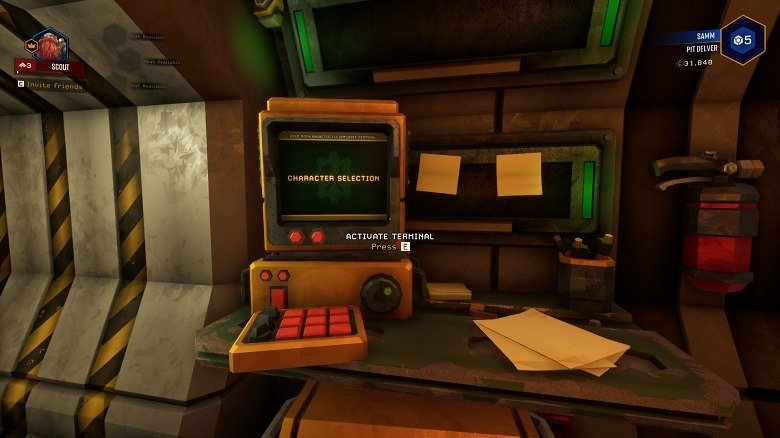 It’s important to note that the Ghost Ship Games has done a fantastic job at balancing the classes and with the right equipment upgrades, perks and Bosco build all classes can stand a chance at high hazard solo levels and be a high contributor to group play. With this in mind what separates the best class from the pack is how difficult solo gameplay is to achieve.

Is the class easy to use? Do they need very specific equipment setups or cave complexity to be viable? Are they flexible so they can contribute in multiple situations? What speed are they capable of beating levels? Do they excel in multiple mission types or a one trick? It’s questions like these that have been considered in developing this best class guide along with not only end game power but also ease of progression as a solo player.

Given these situations the best solo class in Deep Rock Galactic needs:

For players that constantly swap between solo and coop play this leaves the Drill or Engineer as the most reliable options for your main class. Read on to find out why each class excels or is inferior in solo or coop play. 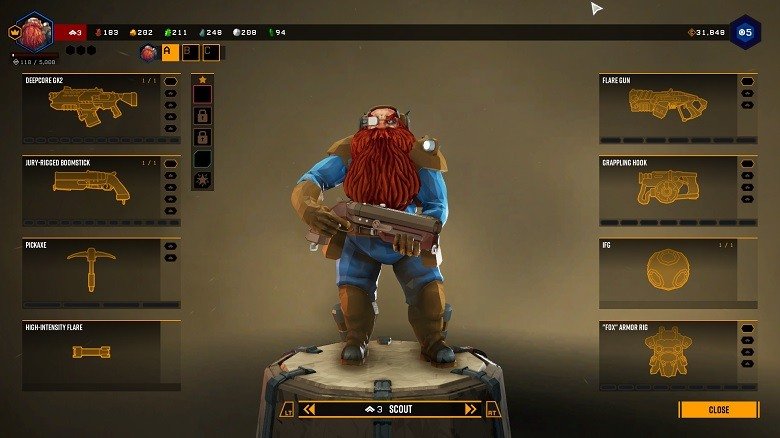 The best solo class in my books due to his ability to complete missions with fantastic speed with the grappling hook support tool and invaluable flare gun for solo play. With both of these equipped the Scout has no problem exploring a full map by himself and commanding Bosco around to mine everything on his behalf. An approach to speed is vital to using the Scout in a solo environment as you’ll want to limit actual combat encounters as he is lacking in firepower compared to other dwarf classes.

In the cooperative scene I find the Scout to be the least needed as with larger player numbers the ability to scout ahead isn’t as useful as your party splits up and explores everything naturally. With all players throwing flares around constantly the longer lasting flare gun losses some of its power. While his throwables do offer good crowd control the limited ammo of this slot makes them difficult to use consistently. Given the lack of damage mentioned before this leaves the Scout offering nothing that can’t be covered by other classes with extra utility on top although he is exceedingly fun to play when mastered. Explore our Scout build guide on how you can master the scout with important class tips and equipment modifications. 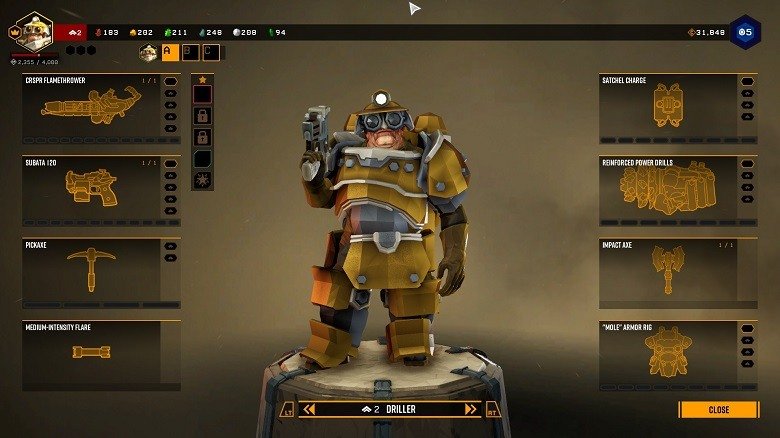 The Driller is an attractive option and arguably the best class overall given his strong contributions to coop games while retaining the ability to be a formidable solo dwarf. This comes from his two deadly primary weapons that bring significant damage, area of effect and crowd control depending on your selection and associated upgrades.

As if that wasn’t enough his damage output continues with satchel charges and reinforced power drills that also double as his mobility slot item. While on the surface these drills seem basic in comparison to other mobility tools with practice they are capable of easily moving both up and down caverns and create a permanent path in the process for any backtracking needs.

The drawbacks to the Driller are limited but he is on the weaker side until you get some key equipment upgrades particularly for the Subata 120 secondary weapon. Read our Driller build guide for the ideal equipment setup and useful tips for using this top tier coop dwarf. 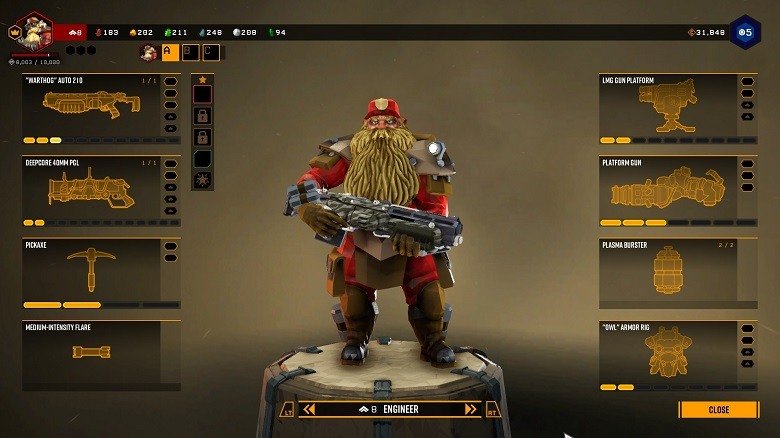 Another strong overall class with their setup effective in both solo and coop play. The Engineer packs one of the best wave clear weapons in the game with his deadly grenade launcher offering a simple to use point and click weapon to wipe an entire swarm or alternatively be used to claim hard to reach resources.

You shouldn’t sleep on his trusty shotgun though that equally packs a punch and combined with his turret speciality he can reliably hold down a location alone or with other dwarves. It’s this strength in single locations and while on the move that make the Engineer a consistent class for your Deep Rock Galactic adventures.

While he lacks a fantastic mobility tool out of the gate due to it needing some key upgrades and significant practice at advanced levels of play the platform gun can block fall damage and allow you or your team to safely ascend or descend with a permanent option. 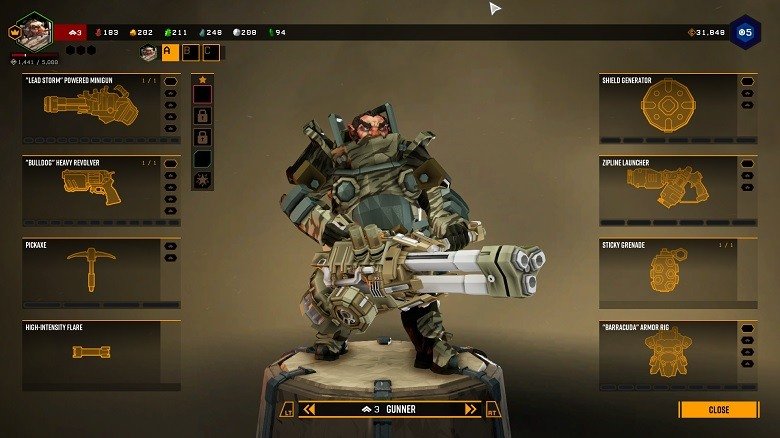 Despite his low rank on the Deep Rock Galactic best classes tier list here the Gunner is an absolutely brutal damage dealer with his mini gun that can shred enemies. A major draw back to this weapon though is the loss of movement speed and that it takes some time to acquire accuracy which given the fast paced gameplay of most missions is simply not effective. A problem that is compounded by the weak secondary options that the gunner has that makes solo play slow and frustrating for most mission types.

The saving grace of the Gunner class though is his coop utility support tools with the shield generator being a fantastic coop tool in defensive mission types at higher hazard levels. The zipline is also a handy tool for moving up and down caverns and its ease of use for new players is a great asset. Read our Gunner build guide for tips and equipment setups to maximise the strength of this dwarven miner.