With the Deep Rock Galactic best perks you’ll be well prepared to advance through the game and the end game content for all classes. Perks are an important element to your account power level and are slowly earned as you complete various milestones to earn perk points to unlock your desired perk. Perks are one of the under explained and in turn under appreciated mechanics of Deep Rock Galactic and a regular source of new player questions on which are the most effective for your dwarven miner.

Equipping yourself with the knowledge in this perks guide and perk tier list though will allow you to efficiently spend your earned points and have an optimised setup to work alongside your class build. While there are some minor differences in the best perks for each dwarf character this page is designed as an all classes guide and includes specific callouts for the best class for a perk where applicable.

Before diving into the best perks the following mechanics are important to understand: 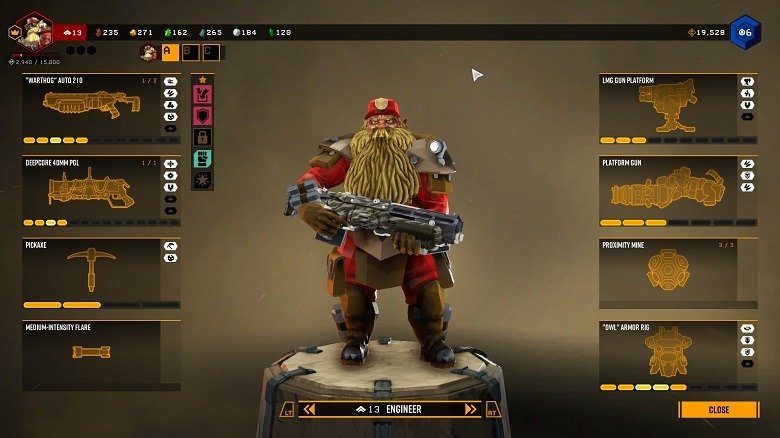 What Makes A Perk The Best?

This Deep Rock Galactic perks tier list guide is designed with S, A, B and C tiers discussed in that order along with a description of what each tier represents and why each perk is within that tier.

The S tier perks should always be the first that you consider in your perk loadout. These are the top tier options in this perk guide with their broad effectiveness across multiple situations ensuring they provide the best result for your limited perk slots. You can expect your perk loadout to always include a sizeable number of these S tier perks and their high effectiveness and utility means they are regularly used by the community as well.

One of the first perks you unlock and also the most useful if you regularly play with others is the field medic that serves you well across all difficulties. Not only does it make reviving fallen allies faster and save you time it also allows for an instant revive once per mission that is invaluable at lower player counts on certain mission types.

A useful Deep Rock Galactic perk across solo and multiplayer missions and another that is available early. While this perk lost significant strength in the perk rework of 2020 it is still a staple for its powerful last stand that gives you up to 12 seconds to unleash on enemies to make a revive easier for your team and is particularly useful to help a team reset from a deadly encounter.

A perk that shines more on some classes than others depending on your primary and secondary weapon setup this is a quality of life option. With this equipped you can constantly swap between your weapons to maximise your DPS without having to go through a reload animation. This makes it a good candidate for the best perks for engineer with as you have his explosive secondary reloading passively in your pocket.

Removing up to 30% damage from a range of elemental damage sources at max level this is a useful perk that shines on a decent number of map and missions combinations that every class can use. Ultimately it means less damage taken that needs to be replenished through supplies or red sugar. 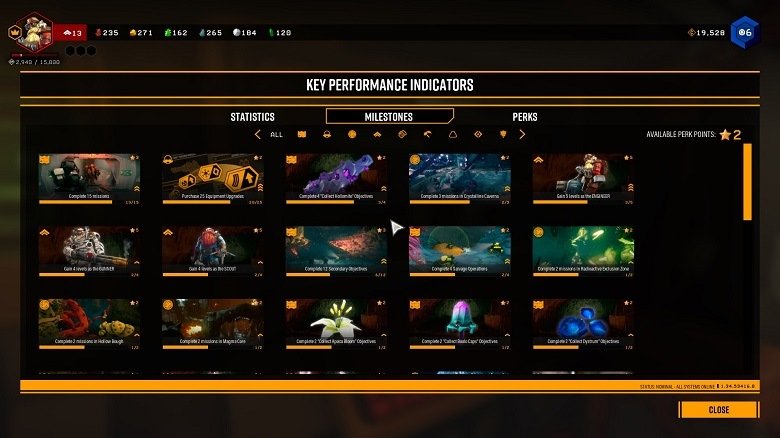 Moving into the A tier of the perk guide these perks are still absolutely viable in your class builds and can be run in your perk slots no questions asked. The only thing holding these back from the elusive S tier above is the fact that the are useful in a smaller number of situations, need some playstyle awareness or take time to reach their peak performance.

Unlocked further into the perk tree this isn’t an active perk you can access early unfortunately. This is a quality of life improvement worth selecting though as it can help you get out of trouble when surrounded or simply move around the map faster given this is a significant part of the Deep Rock Galactic experience. This perk really begins to shine at max level which reduces the cooldown from 40 seconds to 25.

A perk that thrives on particular defensive missions where you have to stand close with your allies and prevents you taking damage with stronger shield regeneration between waves of attacks. The ability to overcharge an ally shield by 300% is also something players need to remember to use often for the full effect of this perk. It will also have greater effectiveness on a team of closed ranged fighters where it can be one of the best perks for gunner or driller.

An early passive option that might not sound powerful on paper but at tier 3 and beyond can start to kill the swarming enemies in a single hit (subject to an internal cooldown). This shines particularly on classes that lack area of effect and you find yourself wasting ammo to dispatch small low health enemies given the mission types you’re currently focused on.

With limited red sugar available in missions this can be useful when running with larger groups to maximise your healing potential in a given mining adventure. At max level the speed bonus can also be a nice touch and used to escape from threats provided the appropriate map layout. It also removes reliance on supply drops that aren’t always feasible to rely on in all situations. 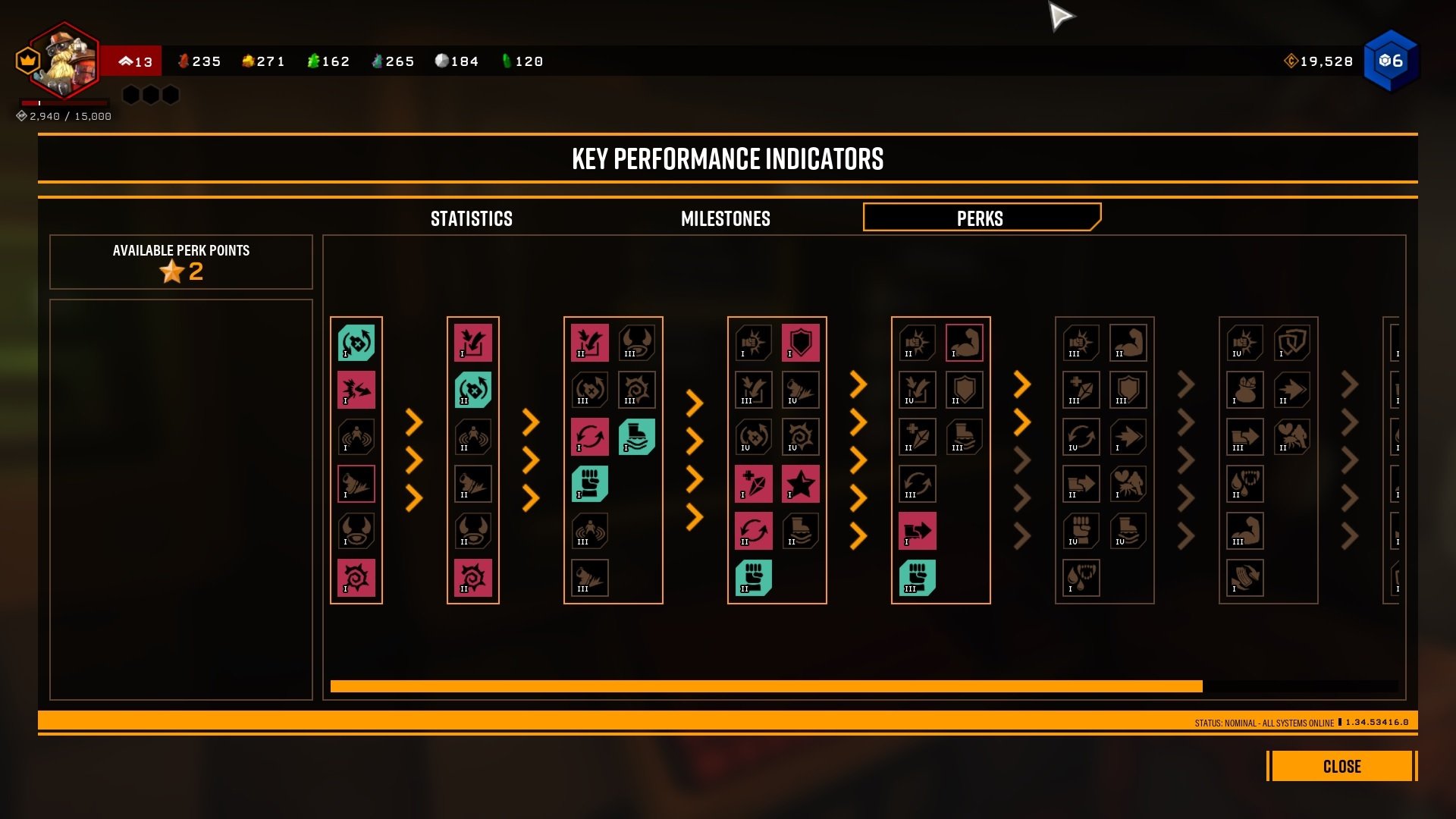 Moving down into the B tier these perks are still an option for your character but require specific playstyle adjustment or circumstances to be effective and even then are unlikely to provide the same level of benefit of those in the S and A tier. Like many mechanics in Deep Rock Galactic though perks have an element of preference and if a B tier perk works for you then by all means use it in your class builds.

If you regularly use your power attack on your pickaxe then the Berzerker perk can allow you to significantly reduce the cooldown of it. If you struggle to remember to use this deadly melee attack though or don’t have your second active perk slot available yet as you haven’t promoted there are generally better options in the previous perk tiers.

A unique perk that is also fun to use as it allows players to convert a grunt (called Steeve) to fight for them and at higher levels significantly boosts their damage output. Thankfully damage is reduced from your allies along with a useful blue glow to identify him from enemies. That being said this perk adds something else to think about and doesn’t actually provide a significant benefit until higher levels.

A useful perk if you find yourself constantly being grabbed by captors from above as you get both an alert that can potentially save you and a get out of jail free card on top of that as well. Given this uses a vital active perk slot though and revives aren’t a significant cost in multiplayer it is hard to recommend particularly when most maps won’t even active this at all.

For players that are still new to Deep Rock Galactic the hover boots perk can prove one of the best as it can prevent fall damage which is a common early game death. Outside of this use you’ll find the hover mildly useful in mining and movement but hardly game breaking. This is however one of the best perks for scout as it gives you a potential safety from fall damage when learning the class.

For those that find themselves being a key mining collector for their team or like to play solo this quality of life buff can mean less return trips to the applicable drop off point. While far from game changing its location in the passive perk tree can make this a useful mid game perk investment as you advance through the perk tiers.

One primarily for the multiplayer public game hunter who finds their teammates being less than careful with their weapons. It can also allow you to be a little more careless yourself if you like to spam area of effect weapons which makes it a good default if you like to spray and pray without thinking.

For most situations you’ll likely take more damage than you recover with the vampire perk but can be useful on the lower hazard levels of Deep Rock Galactic. This is one of the best perks for the driller though as he has multiple attacks that count as melee and options to freeze enemies in place that makes the health regeneration easy to acquire compared to other dwarves.

A solid boost to your resupply speed that can be a fantastic quality of life mechanic when you need to resupply in a pinch. Generally though you want to manage restocks between wave attacks which means the speed boost isn’t actually helping you survive in practice. The health gain can be nice though as a method of optimising your limited resources but supply drops are not as reliable as red sugar in most situations.

Another quality of life improvement that can significantly boost your deposit speed to save a small amount of time. The reason you’ll take this perk though is the damage reduction offered when near a deposit point which is best used on gunner or engineer who hold ground near these locations. 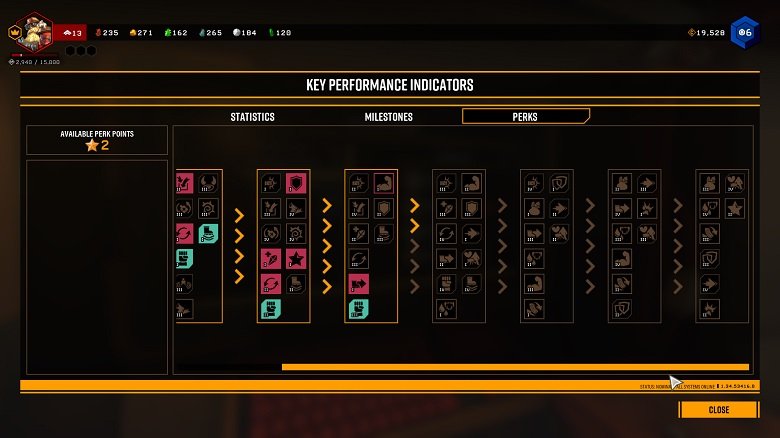 See You In Hell (Active)

Offering a unique mixture of melee damage boost and active shockwave this perk is let down in that the bulk of the strength comes after being knocked down for which Iron Will is a significantly more versatile perk.

While fun to watch loot bugs explode from your presence this perk is simply not useful given these valuable bugs can easily be defeated through other means. Even Ghost Ship Games (the developer of Deep Rock Galactic) has admitted this was added to the game as a fun meme perk.

While you do spend a lot of time sprinting in Deep Rock Galactic the situations where the map layout is simple enough to have a full 5 or 4 seconds of run time for this to activate are actually minimal and your passive slot is better used with other options in this perk tier list.

With a boost to your throwing abilities strong arm is a fairly self explanatory perk although this will not significantly improve your chance of survival as the extra throw distance is simply not needed so I’m not recommending it in any situation within this Deep Rock Galactic perk guide.

Ensuring that you aren’t slowed down by environmental factors and a small boost to carrying heavy items slightly this is another perk that only saves a small amount of time and simply not worth the perk point investment or use of a slot.