Bosco is an invaluable companion in solo Deep Rock Galactic missions, learn the best build (gear modifications) and how to effectively use Bosco in this guide to the all purpose drone.

Officially known as APD-B317 but commonly referred to as Bosco in game this robot drone accompanies players on all solo class missions by default and allows for completion of missions without allies for those that want to brave the depths of planets alone. Bosco will also join players in multiplayer games where no other dwarf is present before exploding when one joins. While the Deep Rock Galactic community has enquired about having these added to multiplayer games there are currently no development plans as he was not designed with networking requirements in mind.

As your only ally in these situations having the best Bosco build possible and knowing the correct commands is an absolute must as you progress to your first promotion. In this guide to Bosco we’ll cover what Bosco’s primary functions are, commands to control Bosco, the best gear modifications from each level and the cosmetic customisations available. Combined with the best perks and character builds you’ll be well on your way to the highest hazard difficulties. 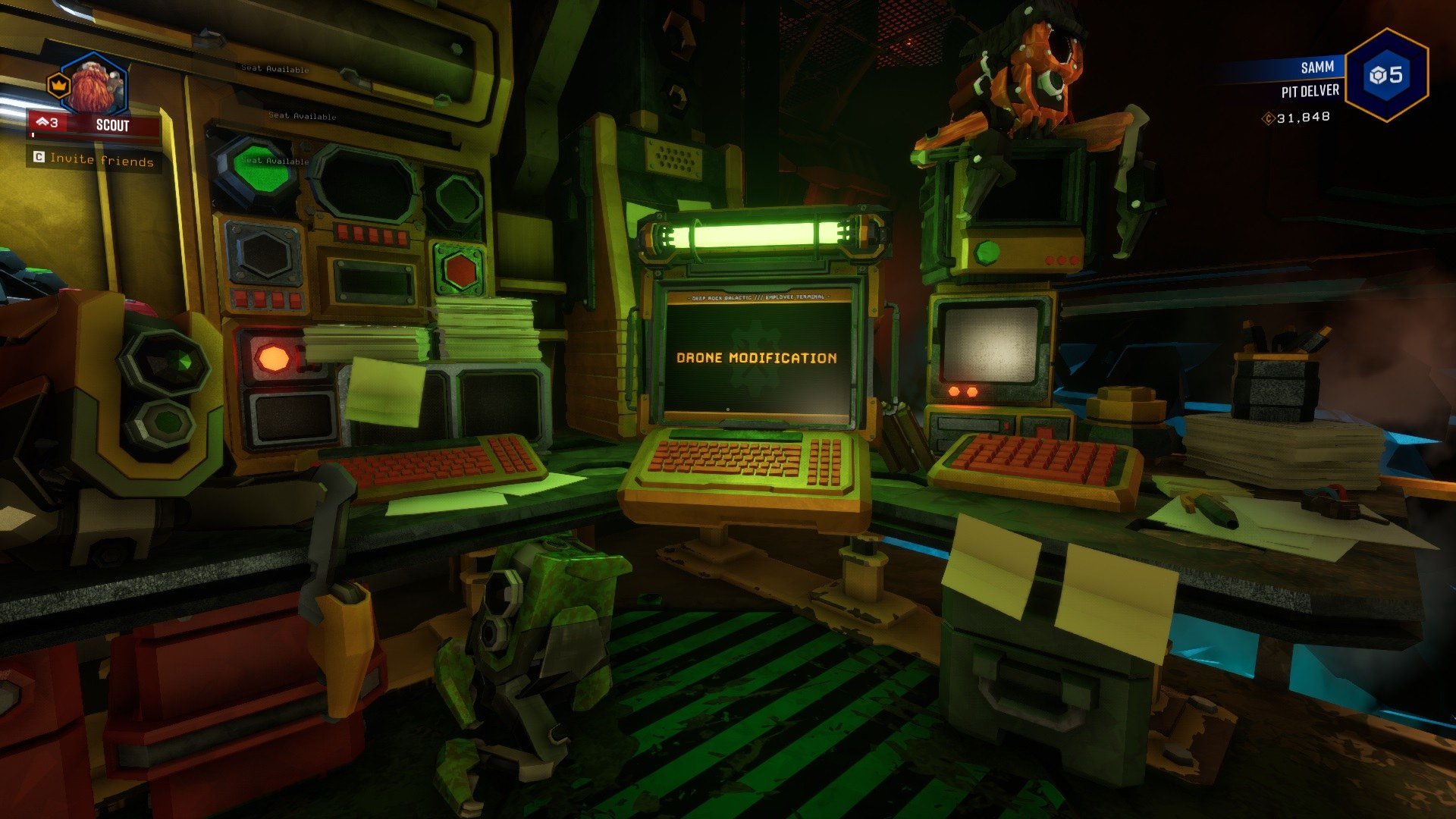 Bosco is designed to replace allies in solo play and offers players the following functions:

How To Use Bosco – Bosco Commands (PC)

Bosco can be commanded by the player in the following ways:

If you are not sure how to bring Bosco on a level click the “Bring Bosco” option on the bottom left corner of the Bosco modification screen (shown below), this is enabled by default. 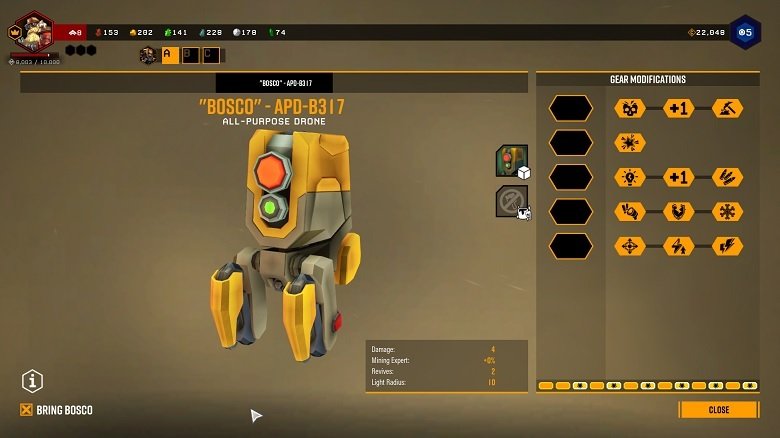 Bosco like many pieces of equipment in Deep Rock Galactic only truly shines once you have gear modifications installed. Unlocking all the upgrade tiers (5 total) is not a difficult task and becomes available as early as player rank 5 which can be reached with around a dozen hours of game time.

The best build for Bosco will use a mixture of these gear modification options depending on your personal preference and playstyle. To assist in creating your own drone build I’ve ranked each gear modification from all tiers along with reasoning.

Tier 1 – Mining Expert > High Velocity Rounds > Extra Revive: All of the options on this tier are viable although the winner is mining expert which helps with the speed of your mission completion which is a serious quality of life improvement. For missions with limited mining required or for those players that prefer to mine for themselves the extra basic attack damage is a good second pick and can even be prioritised on combat focused mission types. Lastly, if you need the extra revive this can be an option although I would generally take the tier 3 version first.

Tier 2 – Rockets: With only option in this tier there is little to discuss, the rockets are a great investment into Bosco and should be unlocked when you have the necessary credits and Enor Pearls.

Tier 3 – Extra Rocket > Let There Be Light > Extra Revive: With an extra rocket you’ll have 3 to use on each major combat event in Deep Rock Galactic that is a significant boost to damage output that you can get from Bosco. The light option is also another quality of life enhancement to save you squinting in the dark or spamming your own flares but the fact that this isn’t passive hurts the usability as it requires you to direct Bosco to an area to activate it. Similar to tier 1 the extra revive is a potential fall back option if you want more safety than the initial 2 free revives of Bosco.

Tier 4 – High Frequency Explosion > Cryo Explosion > Fear The Rocket: Being able to blow off armour from your enemies with great efficiency it is hard to look past HFE as your option as it will boost your damage against well armoured enemies and synergises well with the other rocket options. Cryo Explosion sounds useful but in practice the lose of damage isn’t worth the slowing power it offers in the vast number of situations. Finally, I would ignore fear the rocket entirely as fear is rarely a useful mechanic compared to the other options.

Tier 5 – Overcharged Rounds > Bigger Explosion > Fast Regeneration: The addition of electrocution chance on basic attack is deceptively powerful as it provides a slow effect on enemies that gives you ample time to run away and reposition as necessary. Otherwise its a tight second place between explosion and regeneration. While the regeneration effect is significant and gives you more rockets overall I find in practice the use of records is already spaced out between swarm events and the extra damage radius on rockets allows you to be less careful with your targeting of Bosco. That being said for any defensive mission the faster regeneration will likely prove more useful if for some reason you aren’t using overcharged rounds. 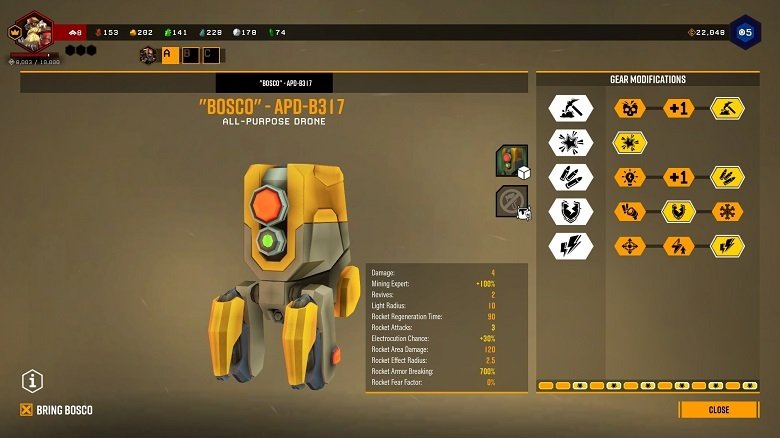 Bosco has 3 different frameworks available to him along with 4 different paintjobs that are earned as you unlock additional modifications. As with other cosmetics in Deep Rock Galactic they have no impact on gameplay and as Bosco is only for solo play there is no ability to display these to any players other than yourself. The cosmetics are unlocked at the respective progression points: 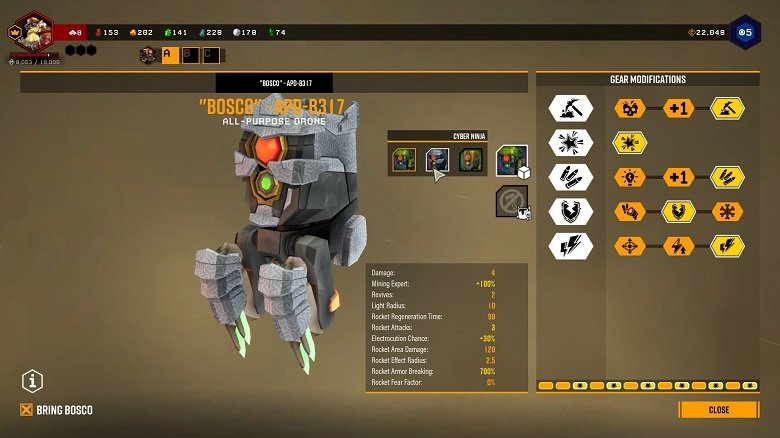 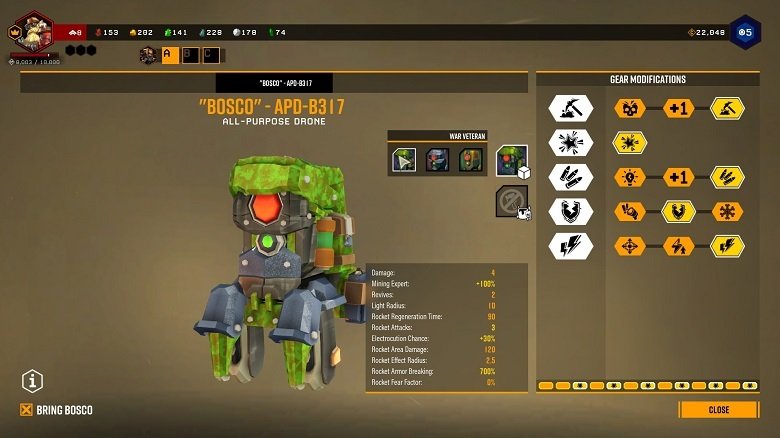