With this driller build guide and tips you’ll be well equipped to deal with groups of enemies and drill through the earth to make useful pathways for yourself or allies. The Deep Rock Galactic (DRG) driller is one of the four available classes in the solo and co-op mining adventure and sometimes overlooked for the value he can provide.

I consider the driller to be the best coop class in Deep Rock Galactic though and in this guide to building your driller you’ll able to show others the power of a high tier player. As with all builds there will be some aspect of playstyle preferences that goes into creating the best driller build and where this is the case I’ve presented the options with sufficient detail so you can make an informed decision on your build choices for your preferred playstyle. Note though that the driller does have significantly less variation in builds compared to other dwarven classes with a clear winner for most modification tier upgrades.

In addition to the core build I’ll cover some general tips on maximising your role as the driller to take you from beginner to your first Deep Rock Galactic promotion and how to mix and match the best options to ultimately create the ideal driller build for your gameplay style.

Like many of the classes in Deep Rock Galactic the name speaks for itself when it comes to the driller with your primary goal to drill out paths for your allies to the map objective. When you aren’t creating pathways through the terrain though the driller is a capable fighter alongside the gunner and has fantastic damage and even crowd control depending on your selection of weapons with your perk choice often enhancing these strengths. The driller is a great master of all mechanics class in the Deep Rock Galactic universe that wants to stay in range of this teammates to protect them and make their lives easier.

You’ll see this reflected in the heavy flamethrower, cryo and sludge options that are paired with weaker secondary weapons for backup damage. For utility the driller comes equipped with the powerful satchel charge that can be placed in strategic locations to be later detonated to damage bugs or simply to clear terrain. Your class utility skill is similarly focused with your large reinforced power drills capable of being a melee weapon if required but are intended for team mobility with cave drilling. The drills are vastly more effective at terrain destruction than your pickaxe although cannot be used for mineral mining. 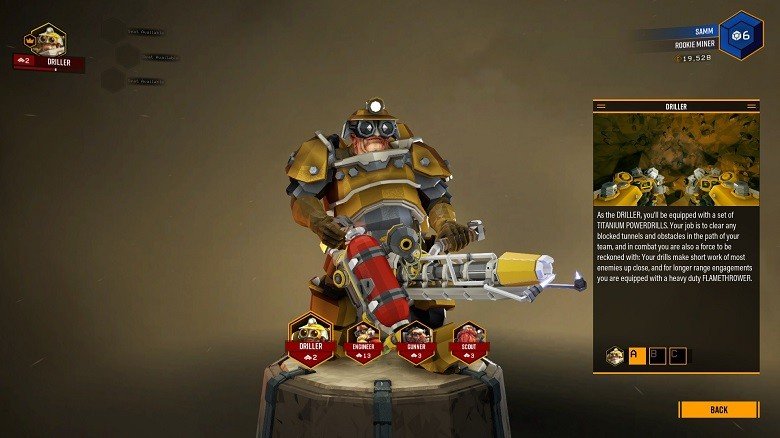 The driller is effective across low and high hazard levels with the right focus and use of Bosco in solo gameplay. Utilise the driller tips below to boost your survivability and speed across the various mission and enemy types of Deep Rock Galactic. 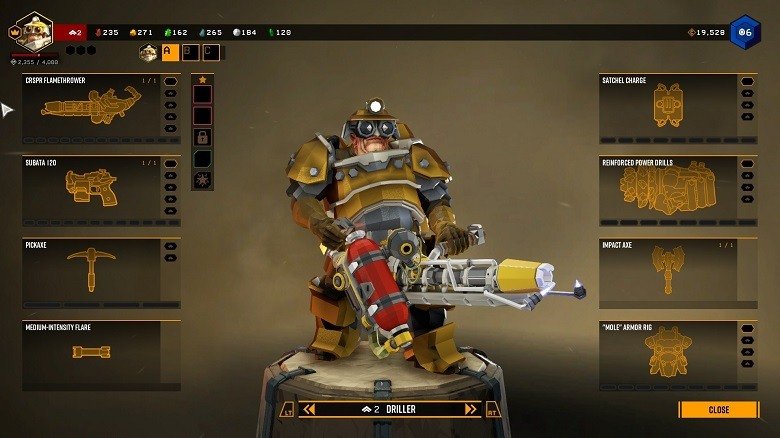 With an understanding of how the driller fits into a role in your Deep Rock Galactic team and some useful driller tips in hand we will now dive into options for creating the best driller builds possible. As noted early in this build guide article you’ll have some aspect of choice to consider here as you create something for your preferences and also the particular mission types that you favour or need to complete for your general account progression.

Keeping this in mind the below is a guide to give you direction on the strongest selections that you should be choosing while pointing out the worst options that should be avoided in all cases. Combined you’ll be able to mix all of this information into a build that feels enjoyable and powerful for your own mining adventures.

The Driller primary weapons can vastly impact on your role and also a key consideration if you intend to conquer the challenges that come your way as a solo or team orientated player. All of the driller weapons are equally viable at their intended role though provided you use them for what they were designed for with each having a different elemental theme (flame, cryo and sludge). 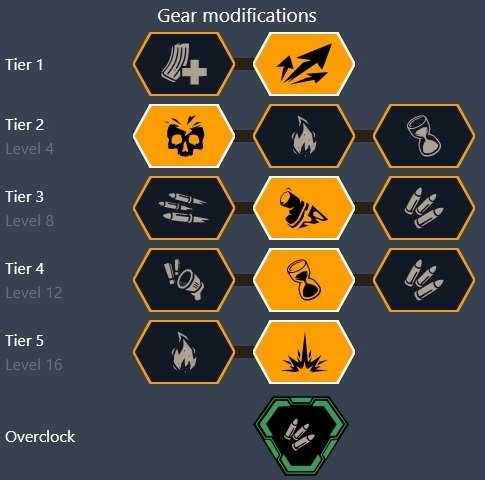 CRSPR Flamethrower: A flame based weapon and the default for all drillers which gives you fantastic area of effect damage and control over the battlefield as you hold down the trigger to burn your bug enemies for additional damage although at a short range in comparison to other dwarven weapons. It also has the unique ability to leave some lingering flame for further crowd control although it’s primarily going to be a direct damage tool with some ability to get under the armoured plates of the stronger foes if you desire this in your flamethrower build.

For recommended flamethrower mods you primarily want to focus on boosting the range of the flamethrower as this is one of it’s greatest drawbacks and making the sticky flame mechanic even more deadly. 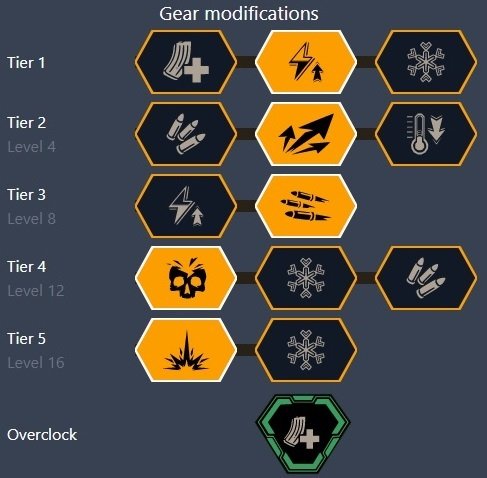 Cryo Cannon: Your second primary weapon option for the driller which becomes available at level 10 and offers a completely opposite playstyle to your flamethrower although both have an element of slowing down incoming attacks. Focused more on supporting your team through damage boosting cryo effects this is not a weapon you’ll want to run when playing Deep Rock Galactic solo and instead reserved for games with at least 2 or 3 other players that bring sufficient damage sources. Building your cannon to reduce wind up time and extended range can make it significantly more flexible and the recommended pathway. 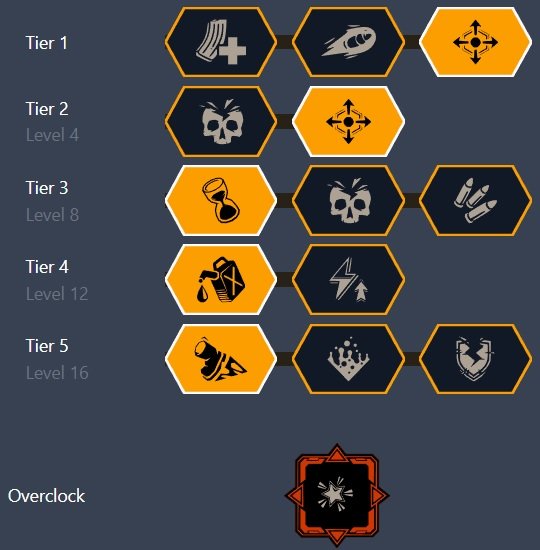 Corrosive Sludge Pump: Introduced in the November 2021 patch this sludge pump or CSP has similarities to the other driller weapons with an emphasis on crowd control and often compared directly to the sticky flame mechanic on the flamethrower weapon. The CSP is particularly effective at narrow chokepoints where you can cover the ground in goo and enemies are forced to walk through it although its charged fragment shot can still hold its own in open areas. While the damage is okay from this primary weapon the utility of the slow and map control in a team setting is its strength and thus predominately what you’ll be designing your Corrosive Sludge Pump build around.

Driller secondary weapons give you a weapon option with longer range than your primary weapons and an alternative method to remove basic enemies from the map. Neither of these pistol style options offer significant damage output though so don’t lean on them heavily to clear paths quickly through your enemies. 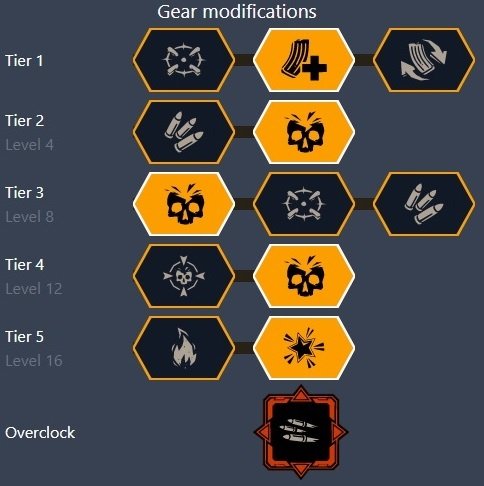 Subata 120: Your default sidearm and the option that is easier to use so will most likely be your go to selection. It’s essentially a simple pistol which with the right modifications can see a boost of damage and capacity that make it a reliable side arm and the recommended mods reflect this approach. This means skipping out on the expanded ammo capacity upgrades but given it won’t be your main weapon in most situations is generally not an issue. Tier 5 mods for the Subata 120 has a major decision though and while I default to the Mactera toxin as a counter to flying enemies you can also run Volatile Bullets as a solid DPS boost when paired with your flamethrower although needs some micromanagement while playing to maximise this benefit. 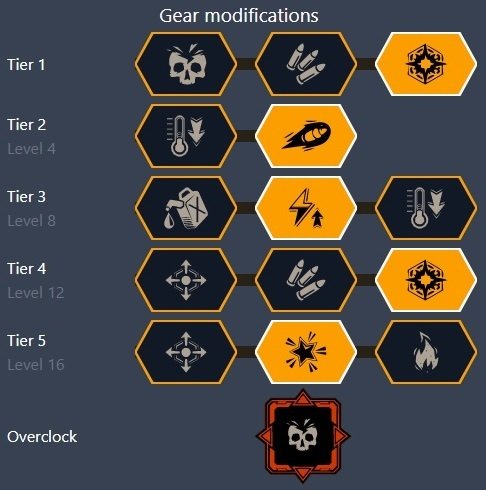 Experimental Plasma Charger (EPC): A fun experimental weapon that is vastly different from the bullet focused weapons that many other dwarves carry and leads many drillers to design a fun experimental plasma charger build. The EPC comes with two firing modes allowing you to shoot single shots or charge up a more powerful attack when necessary. Both of these generate weapon heat that will stop you firing the weapon for a short period while it cools down but there is no reloading for this weapon. Damage wise this weapon at base deals nearly double the damage of the Subata 12 and five times the Subata 12 for a charged shot with the trade off being significantly less ammo. There are a few ways to build the EPC and I prefer focusing on strong shots and use the weapon accordingly but you can also build it for a more generalist basic attack sidearm (both options included below).

Your equipment as a driller has briefly been covered above and is primarily about terrain altering options to help your team move around the map to key locations. This support utility should not be overlooked as a good driller can save his team significant time and pain during all hazard levels and game modes. 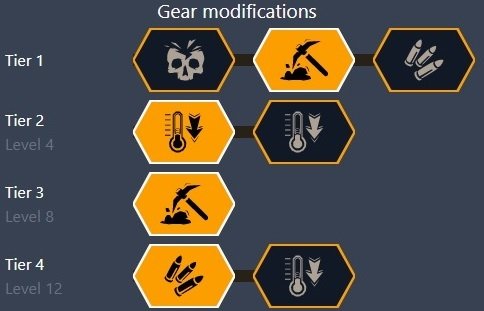 Reinforced Power Drills: The thing that gives you the driller name is your powerful hand drills that are ideal for clearing dirt pathways but also highly effective in melee range if required. This utility equipment item has simple upgrade options that focus on faster drilling, cooling them down after use and giving you a small uplift in ammo capacity. 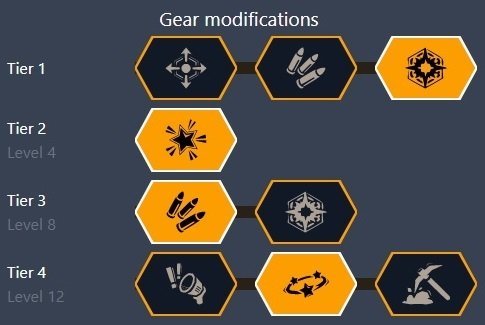 Satchel Charge: With the ability to remotely detonate this satchel charge (or commonly known by the player base as C4). This piece of equipment is equally powerful as a defensive and offensive weapon while also being a terrain clearing powerhouse. In terms of upgrades you’ll be able to pick up some extra damage, stagger enemies and an extra satchel. 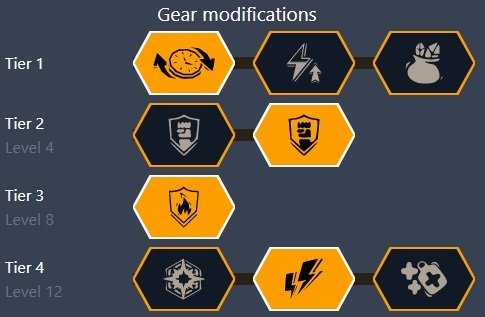 “Mole” Armour Rig: Similar to your dwarven allies you’ll have an armoured rig that you can upgrade to boost your odds of survival. These upgrade options are fairly typical on most dwarves and give you a slight uptick in your survival chances if your shield does break while in the thick of it which is generally where you’ll be as the driller.

Like all classes in Deep Rock Galactic the driller has three options for throwable weapons that each have their different use case to consider in designing your personalised driller build for mining adventures.

Impact Axe: One of the more unique variations of throwable items in the game this axe is deadly on impact damage and allows for up to 8 to be carried giving you the highest amount of throwables of any dwarf. An added bonus is this counts as a melee attack for triggering certain perks and if you miss the enemy it can be reclaimed so you’ll always get full value from your stack of 8. In summary this is a great default option that you can use for most driller situations without much thought.

High Explosive Grenade: Continuing the theme of high explosive power when it comes to the driller this is for players that want even more opportunities to blow things up. While a solid option with its 6 capacity its generally overkill given your other gear options already have ample explosive destruction so would be the lowest on my tier list of driller throwable items.

Neurotoxin Grenade: The best grenade for your driller when running with the flamethrower and playing multiplayer as the effectiveness is dramatically enhanced with the option to light the gas cloud on fire. While not offering the damage of the impact axe it can be a viable way to deal with large threats or to protect a revive attempt for an ally.