With a solid engineer build and tips from our Deep Rock Galactic guide you’ll be able to use your turrets for deadly impact with friends, strangers or alone with Bosco. In this engineer build guide I’ll cover how I play my favourite class of the available dwarves including the best equipment, modifications, overclocks and some helpful engineer tips that might not be obvious the first time you pick up this character.

Focused on defensive support the Engineer’s playstyle in Deep Rock does lend itself to setting up at a single location although sentry gun build time and reconstruction is not significant enough that you can’t move your setup from point to point with your allies. His utility platforms can also be invaluable to a team although the Engineer does in solo potential so I don’t consider him the best class for solo Deep Rock play despite him being my favourite overall. This guide to the engineer is ideal for the beginner or intermediate to the class who is looking for a solid foundation build that they can tweak to their liking and playstyle preferences.

The playstyle of the Engineer is one of a reliable teammate with his ability to defend himself and more importantly key map locations while out on a mining adventure. This means he thrives in the co-operative environment of Deep Rock Galactic giving you a position to fall back to when the swarm attacks defended by ability to summon a turret that automatically fires at foes. On the movement utility side the Engineer can setup platforms to create useful pathways for paths regularly travelled when completing a level and provides both vertical and horizontal movement that stays in place unless destroyed. The Engineer is also a favourite partner of the scout as they can provide high up platforms to help scout’s with their grappling hook movement.

That isn’t to say the best engineer build can’t hold his own ground with hard hitting weapons and area of effect potential that means he can stand alone when he has too. Using the right Bosco build the Engineer can even complete most solo content although generally not as swiftly as other dwarven class options. Maximising high damage output and utility also requires a little more forethought than other classes as you’ll always need your turret close to you in order to reach your maximum DPS output. 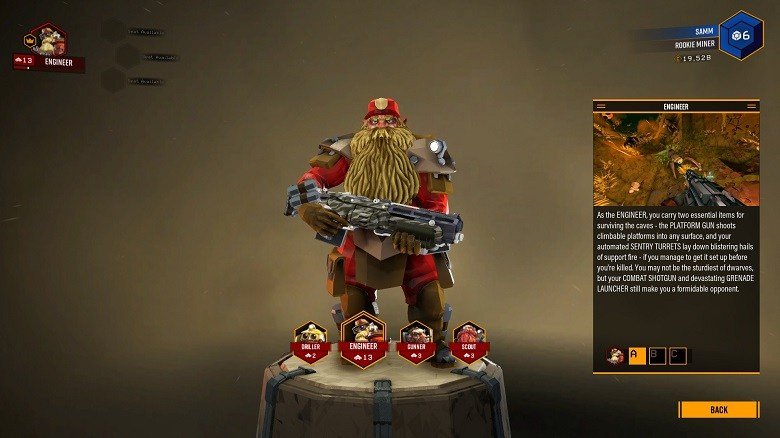 Like every dwarf in Deep Rock Galactic there are a number of engineer tips that can take you from average to unstoppable once you understand how to best utilise your weapons and abilities. Making smart choices of when to engage and when to hold back while thinking ahead is central to the engineer playstyle which is empowered further with the best Deep Rock Galactic perks. In order to reach that goal of Deep Rock Galactic character promotion you’ll need the most effective engineer build for experience through mission completion. The engineer has multiple build options to take although some only shine once you get sufficient modifications on them to cause sufficient damage to bugs. Like most other dwarves these builds revolve around maximising your damage output on primary and secondary weapons along with the utility of your other equipment slots with a balance that suits your preferred playstyle and favourite mission challenges.

Your primary weapon options both come with reasonable damage output although don’t really shine until you reach some key damage milestones through gear modification. The weapons have vastly different designs and in turn playstyles with the shotgun focused on enemy weak point stuns and while the SMG option specialises in electric shock chance. 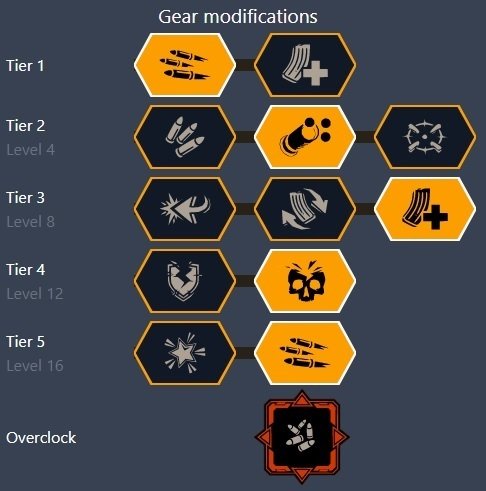 “Warthog” Auto 210: Your base engineer weapon that is easy to use at close range and can make quick work of most foes at this range. It’s damage really starts to ramp up and be capable of dealing with tough mobs after some upgrades are obtained and is more modification reliant than most weapons in Deep Rock Galactic. Those that push through these early pains though will be rewarded with a straight forward and trustworthy firearm for most occasions the engineer will find themselves in. There are many ways to spec this weapon although focusing on direct DPS with damage, rate of fire and reduced reload time are preferred. While you can design this weapon with reduced spread for longer range fights this is really not the intended use of this weapon so not the recommended engineer build path in this guide. 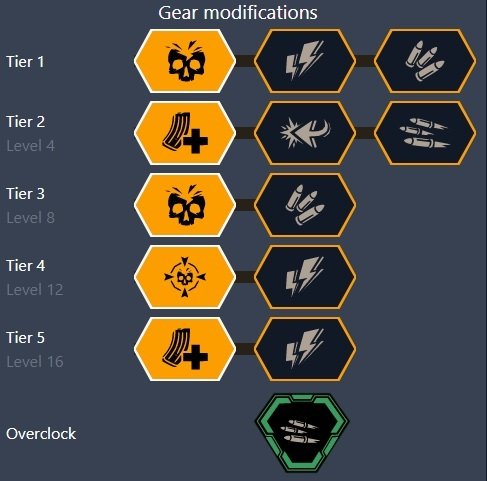 “Stubby” Voltaic SMG: A fast firing alternative that comes at level 10 to the engineer class that gives you an extension to your range along with electrocution potential for some minor damage overtime and slowing effect on the target. This SMG allows the engineer to play a run and gun style although generally isn’t more useful than your shotgun option as it lacks magazine capacity, damage and handling that simply can’t all be improved with the limited modification slots leaving it in an average overall state. At lower hazard levels and some mission types though you can still run this for a simple hold down the trigger and spray option. I recommend you either invest heavily in damage and magazine size or play into the electrocution theme of this weapon entirely, don’t mix and match these two options.

Both of your weapons in this slot specialise in dealing with groups of enemies efficiently although they do it in dramatically different fashions. When a swarm approaches you or your team they won’t survive long with one of these options equipped and offer the best ranged area of effect damage outside of throwables in the entire Deep Rock Galactic game. 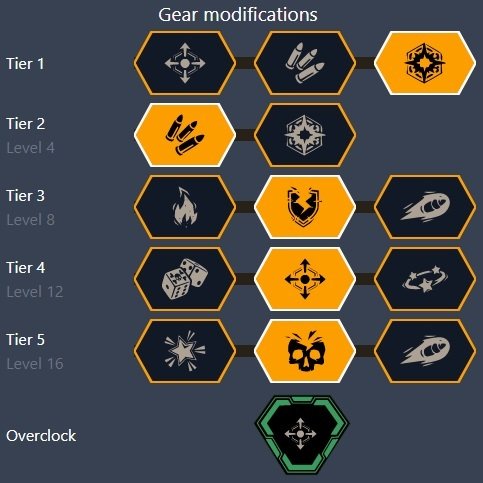 Deepcore 40mm PGL: Perfect for obliterating the swarm at range the PGL is deadly to all enemies although offset by the limited maximum ammo capacity and single shot design that take some practice to use effectively. Be careful when using this at close range or narrow corridors especially with other dwarves around as it can quickly result in friendly fire accidents. Generally I find a balanced approach to upgrading this weapon is the best approach as it ensures that it remains relevant in a wider range of situations then specifically focusing down one path, you also need a minimum amount of damage for it to be effect at it’s intended are of effect killing power. Accordingly, you’ll balance modifications to get a combination of extra ammo, damage and explosion radius. 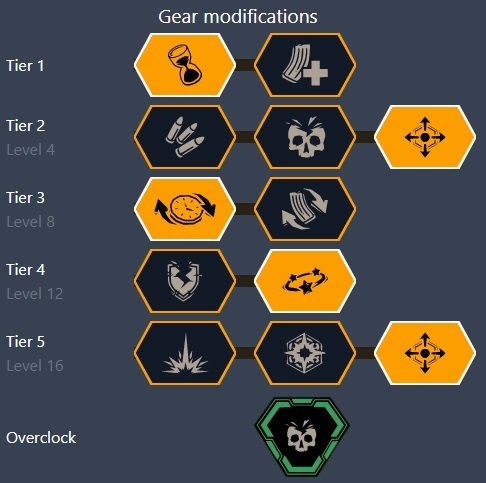 Breach Cutter: An interesting Deep Rock Galactic weapon that is still capable of dealing damage to groups in the right situations although is generally selected for its damage against powerful single targets like dreadnoughts. This is primarily driven by the requirement of having clear and flat pathways to shoot at your enemies with high cave complexity quickly hurting your potential damage output. The Breach Cutter also requires a bit more active thinking when using and closer range to be effective that often isn’t worth the effort compared to the easier PGL. In creating your ideal Breach Cutter you’ll generally want to maximise it’s utility with projectile beam improvements where possible to make the weapon more forgiving to use. If you want more of a burst damage option though for tough monsters that’s equally a viable option.

With the engineer equipment in Deep Rock Galactic you can create rock platforms for friends and summon a turret partner to help you defend locations. With gear modifications these can also offer additional utility beyond their base configuration which gives high level engineers a significant reward for their time investment. 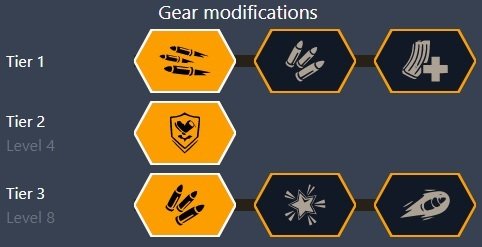 Platform Gun: other than the driller this is the only permanent terrain forming support tool available and makes it particularly attractive on maps where you might have to traverse back and forth between the same area. In its basic form the platform gun is well loved by scout classes but advanced tactics can make this a welcome sight for all your friends and even given the engineer some solid parkour abilities in his own right. For some missions Repellent Additive is worth taking as you can create defensive funnels for enemies that are highly effective, outside of these mission types though it’s usability is scarce so taking expanded ammo in tier 3 is a better default. 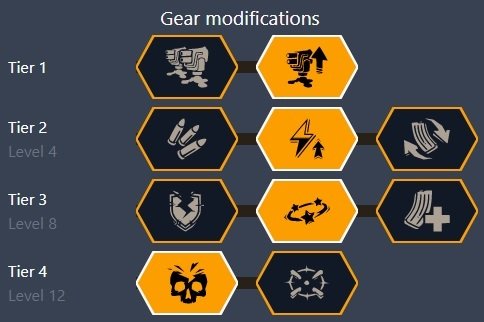 LMG Gun Platform: The defining weapon of the engineer class in Deep Rock Galactic that will fire at enemies within range automatically until empty before needing the engineer to refill it. Building for a strong hard hitting single turret that is quick to deply will serve you well in the majority of game situations and this the focus of the engineer turret build below. 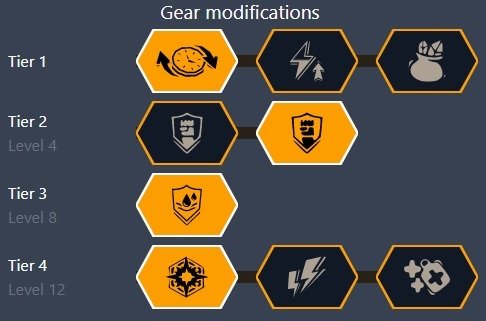 “Owl” Armour Rig: The engineer armour specialises in poison resistance which is then paired with similar upgrades to other dwarves for a survivability boost and can be tailored to your own preferences and playstyle while using this engineer guide as a base. Engineer is one of the few classes I recommended breathing room in tier 4 as it can be surprisingly effective at higher hazard levels at preventing a death snowball as it gives you enough time to get a defensive turret down straight away. Outside of challenges where you expect a few deaths though you should opt for the more general purpose shockwave to help take out small critters around you and keep your turret focused on bigger threats.

The engineer comes with a mix of utility throwables and damage orientated ones to select from. Generally you’ll be opting for your damage option of choice which gives you extra aoe damage for weak to medium toughness enemy swarms you encounter.

L.U.R.E: The starting option for the budding engineer is your utility option that pulls enemy towards it with a dancing dwarf distraction. While sometimes useful to take the heat of your and your allies it’s simply not as effective as dealing direct damage and is also hindered by the fact that it has a cap on the amount of damage it can take before it deals a low amount of electrical damage with applicable stun chance. In practice it can be tough to use as enemies will need to be fairly close and not already locked onto something more interesting to be fooled. They can be a decent choice to protect an ally revive though.

Plasma Burster: Your first damage variant in the throwable category for the engineer this is designed with having an expanded inventory of throwable items in mind with a total of 6 compared with your other options that cap at 4. The trade off is the lower damage that this brings to the table but is still more than capable for the basic bug enemies. The damage is split between bursts which can make it somewhat difficult to use effectively although has a potent fear alongside this damage that means every bug is impacted one way or another.

Proximity Mine: The likely default for most players that requires some forethought and planning to use effectively due to the arming time of 3 seconds. Once armed though it will trigger when an enemy is in range and can actually explode up to four times along with a fear factor on top. Only mines that have not had any detonation can be picked up and returned to your inventory.