Need a gunner build guide and tips for the versatile and strong damage dealing class in Deep Rock Galactic? The gunner is a popular class in the dwarf mining adventure and has a number of flexible build options that are explored below to give you multiple potential choices in designing your ideal gunner.

While the best gunner build will always have an element of personal preference and playstyle there are some clear winners in the respective equipment choices which combined with best perks and Bosco setup will ensure you are ready to tackle the highest hazard game levels. This gunner guide is targeted at the new to intermediate player of both the character and Deep Rock Galactic (DRG) in general and covers the gunners role, basic gunner tips and how to create the best gunner build for you.

As the name of this dwarven class suggests the gunner specialises in gunning down enemies with high damage per second that allows him to protect others on his team. This is also reflected in the equipment options granted to the gunner with miniguns, hard hitting revolvers, a deployable shield and powerful area of effect grenades. As with all dwarves you have a utility movement piece of equipment and for the gunner this is the handy zipline that provides a wealth of team support to other classes.

While the gunner is a capable solo class his equipment shines in the multiplayer environment as a blended damage support class. Players that master both these playstyles will be the ones that can repeatedly promote the rank of their gunner time and time again. Using the gunner in high hazard levels and turning you from a beginner to master gunner player with the following tips can ensure you are getting the most out of your gunner kit. With these tips in mind you can survive more, finish missions faster and add significantly more value to your team in multiplayer. With the basics of the gunner’s role in a Deep Rock Galactic mining team and specific gunner tips out the way it’s time to dive into the best gunner builds available. As with other mechanics of Deep Rock Galactic there is an element of personal preference and mission type that needs to be considered when building your ultimate gunner.

With this in mind the guide below is designed to point you towards the strongest options and arm you with the necessary information to mix and match them into a build that feels right for you.

The Gunner primary weapons are all hard hitting with a mini gun, explosive shell auto cannon and a guided rocket system that are equally deadly from a damage perspective. All of these options are perfectly viable to take into any hazard level with them having specific mechanics that will change how you utilise them in combat. 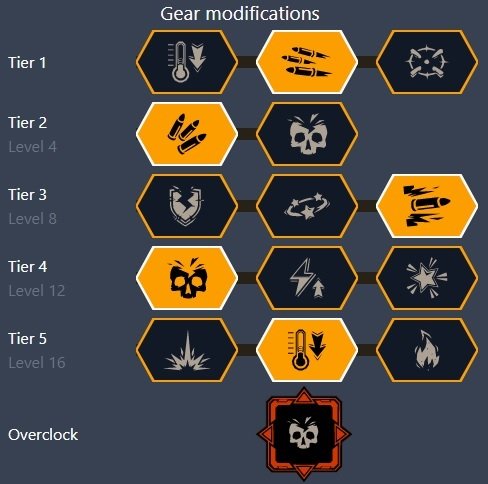 “Lead Storm” Powered Minigun: Has a small wind up time before maximum firing speed and accuracy are reached that makes it not the ideal option for small groups of enemies but there are still options for those wanting a Lead Storm build. The minigun does not need to be reloaded but does have an overheat mechanic that prevents you from firing endlessly. The best minigun build modifications focus on giving you additional ammo, damage boosts and a reliable method to manage the overheat. “Thunderhead” Heavy Autocannon: Available from level 10 onwards this gunner primary weapon alternative does require reloading and uses an explosive round that explodes after hitting terrain or an enemy. Accordingly it provides significantly more area of effect (aoe) damage than the minigun although still has a fire rate wind up and the aoe is not large enough to forego good aim completely. Many of the modification options for an autocannon build either push the weapon towards a direct damage dealing piece of equipment or buff aoe so players should choose one to focus on with their Thunderhead build. “Hurricane” Guided Rocket System: Adding more deadly weapons to the gunner’s arsenal with the November 2021 patch this guided rocket system will guide your deadly rockets directly to the enemy. With the ability to fire rapidly it is equally effective on single targets and crowds of swarm enemies that give it few weaknesses. Depending on the hurricane build that you opt for (and in particular hurricane overclocks) you’ll find the correct usage of this weapon varies greatly so keep that in mind when experimenting with your own builds using the balanced loadout below as a foundation.

Gunner secondary weapons are designed to deal with small groups of enemies given the fire rate wind up times on the primary weapon choices. They are also viable options for when you are moving through the map given the heavy nature of their larger weapons. 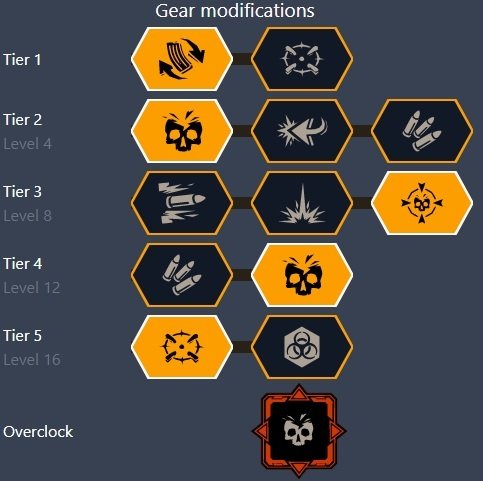 “Bulldog” Heavy Revolver: Usually the preferred sidearm of most gunners in the Deep Rock Galactic community due to the hard hitting damage and stun chance although this comes at the cost of a low magazine size. Modifications focus on maximising the already high damage output and making this weapon ideal for weak point shots on the move that your primary weapons simply aren’t designed for. BRT7 Burst Fire Gun: A secondary weapon that fires a burst of 3 when the trigger is pulled that can make it difficult to use on moving enemies without practice. The larger magazine size does make it useful for dealing with medium sized mobs but usually the gunner will be using a primary weapon for these occasions. Modifications for this gun focus on boosting up damage and adding stun utility. 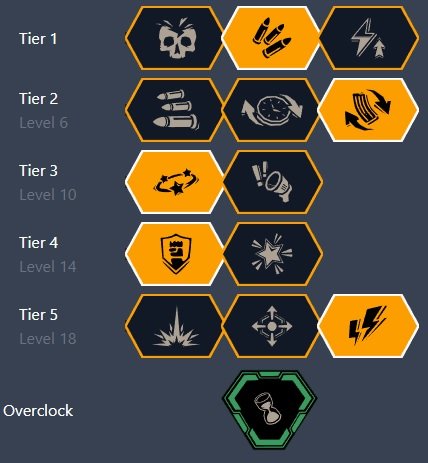 Armskore Coil Gun: A unique weapon with some impressive utility given it allows players to shoot through terrain which also lives behind a trail of damage over time destruction. This gives the Coil Gun an interesting blend of initial burst and subsequent damage which combined with its charge shot mechanic sees it primarily as a long ranged sniper tool with bonus utility for enemies of all sizes. While it can’t reach the damage heights of your other Gunner secondaries it is a viable option given the flexibility against different enemy types and scenarios that it offers. Utilising this weapon with the limited charge mechanic can be somewhat frustrating though so you’ll need to factor this into your playstyle and pair it with a primary to fill your area of effect damage role.

As mentioned already the gunner equipment provides a zipline launcher for your teammates and your own dwarf to use along with a shield generator to protect key locations. Both of these provide significant support utility on top of your damage focused weapons and make a gunner an invaluable addition to a full team.

Zipline Launcher: Ideal for moving across wide gaps and vertical movement the zipline is a useful team orientated tool. Upgrades are focused on improving usability and protecting yourself or teammates from any mishaps when using the zipline.

Shield Generator: The ultimate defensive ability in Deep Rock Galactic to keep you and your allies safe in a single location. Modifications are designed to ensure you get more shield generator time through duration and recharge. 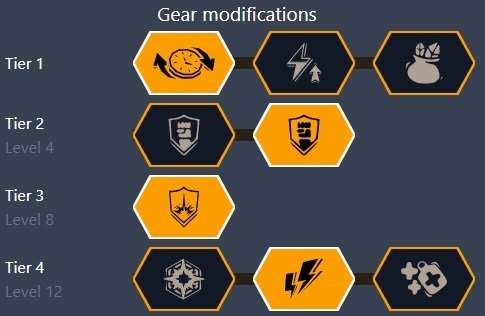 “Barracuda” Armour Rig: Like all dwarves the gunner has an upgradable armour rig to improve their survivability. Given the gunner is often diving into the thick of fights we opt for quicker shield regeneration, extra health pool and area of effect stun to help you gain some distance from your attackers if your shield does break.

All three of the gunner throwables are powerful damage dealers that complement his already high damage output potential. While each has their own strong points they have some differences to consider in choosing the right variation to complete your personal gunner build.

Sticky Grenade: Useful in setting up a defensive location with the sticky mechanic this option also comes with a fear and lets players can carry up to 6 compared to 4 of your other options. It’s a reliable default option that you start with and for the lower hazard levels is perfectly suited to dispatching swarms.

Incendiary Grenade: A good option for narrow passageways as you can lay fire down for any enemies that charge through. As most of the damage is linked to this fire element though it’s not ideal for open spaces.

Cluster Grenade: The best grenade for your gunner builds the cluster grenade adds a nice amount of area of effect coverage but does require some practice to master. This process of being a master with this throwable is often worth the investment though as it will pay dividends in simply so many game situations.

Tactical Leadburster: A throwable grenade that has players summoning a small gun turret for a brief period of time this grenade was added in the Plaguefall update. While absolutely devastating when placed correctly it does generally require a good line of sight of enemies with flat terrain that other grenades aren’t as reliant on to be effective. It can also quickly shred through teammates in friendly fire so while useful in the right circumstances it should be handled with care.