Master the Deep Rock Galactic promotion cycle with this guide on how to promote characters and what these ranks mean for your account. In short chasing promotion is always worth your time in Deep Rock as this promotion upgrade allows you to unlock an additional active perk slot and unlock honour badges to show off your experience to other players. Promotion is also a key reference point of game progression for players in the community with many challenging themselves to promote all characters at least once or reach their own promotion target on their main class.

Regardless of your reasons for seeking Deep Rock Galactic promotion and which character you are looking to promote this guide will help you achieve your goal. This guide covers the mechanics of how to promote characters, what level to promote and useful player level up tips to help you reach that point in an efficient manner.

Promotion is a mechanic in Deep Rock that is designed to allow players to continue playing their favourite class beyond the max player level of 25 and still have a sense of progression for the missions they complete. With promotion players can also continue to grow their blue level (player rank) which unlocks various elements of content commonly bundled together in the term ‘player rank rewards’ in the community.

After you promote a character in Deep Rock Galactic it is reset to level 1 but does not reset acquired equipment or cosmetics so you can continue to play with your preferred build and visual style. Note that prior to 2018 this promotion mechanic was known as retirement and actually did reset these unlocks. 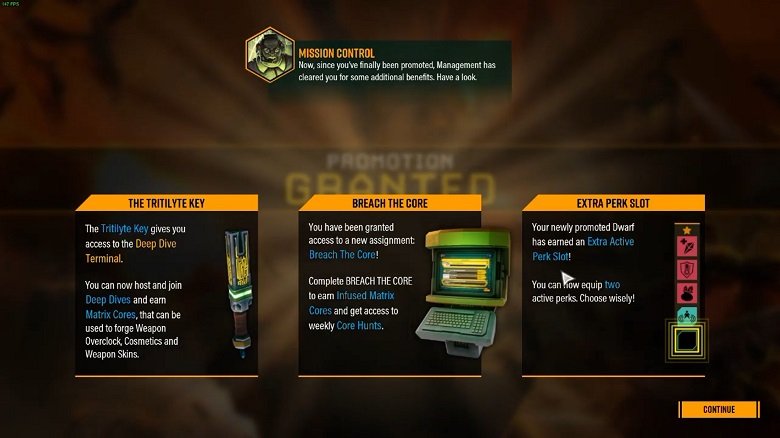 Promotion is often set as an end game goal for the community either on a single class or all classes but also highly sought after for the following promotion rewards:

Given some of these benefits can help your other classes and are time blocked (weekly missions) a common recommendation is to complete one promotion as soon as possible to aide your overall progression. Promotion is also a key step to unlocking the end game of Deep Rock Galactic which revolves around deep dive missions to earn cores to customise your character builds further and complete higher difficulty content.

The mechanics of completing a promotion in Deep Rock Galactic are the same across all of the game classes and included in the video above and as follows:

Deep Rock Galactic Promotion – How To Level Up Fast

While the process of Deep Rock Galactic promotion is fairly straight forward once you achieve the level 25 requirement reaching this point is no small task. If you’re finding the levelling process difficult these tips can help you achieve a fast promotion by maximising the experience you earn in your dwarven missions.