Utilise our scout build guide and tips to optimise this fast moving dwarf for solo and co-op play will ensure you can compete in even the highest of hazard levels. Covering the appropriate scout equipment build and some important tips to maximise your potency this guide covers every key aspect of playing this class.

With the scout playing the role of explorer in Deep Rock Galactic (DRG) their speed makes them one of the best solo classes available allowing you to quickly finish content and ultimately promote your Deep Rock Galactic character. While all scout builds have some variation based on your own playstyle this guide provides a solid starting foundation for you to customise as you see fit.

The scout title quickly gives you a sense of your role in the Deep Rock Galactic corporate mining team with your objective to scout out the area ahead and rely that information back to your team. While this makes him useful in a co-op setting where you can tag key objectives and minerals the scout is also surprisingly effective at solo play in the right hands that makes an effective solo scout build equally important.

While you can’t expect to have the consistent destructive punch of the driller the scout specialises in high personal mobility allowing him to be the eyes of his team particular when a cave is complex. To assist with this he also has a balance of long and short range weapons although lacks both the damage and area of effect ability he needs to fight swarms of enemies alone. With the scout you’ll have access to a primary rifle with the ability to pair it with either a shotgun or submachine gun which are capable of damage in short bursts.

Utility wise the scout is solo orientated with his grappling hook being the only mobility item in that game that only benefits the user. This selfish playstyle is somewhat mitigated by his flare gun to light up areas for his allies although it’s clear the scout is definitely designed to explore ahead of his team as a lone wolf. 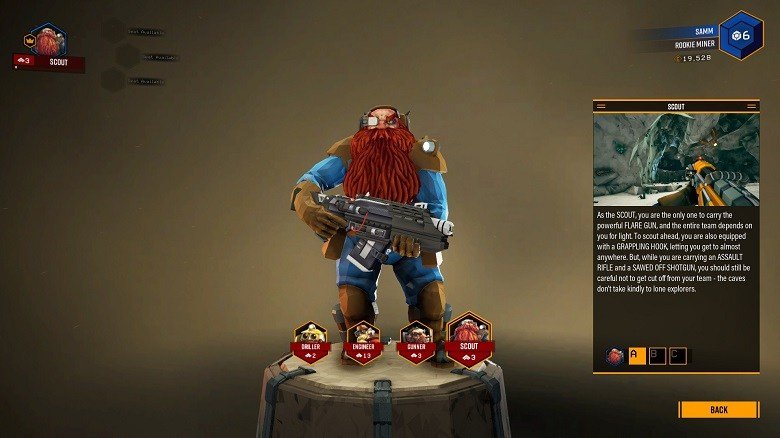 The scout is one of the hardest characters in Deep Rock Galactic to use at maximum effectiveness which is why many struggle as first time scouts to perform. Driven in part due to his solo orientated play and his weaker damage kit overall you need to play a little smarter than the other classes. While your helpful friend Bosco can cover some of this weakness in solo play utilising these scout tips and scout guide is vital to your mastery of the class. 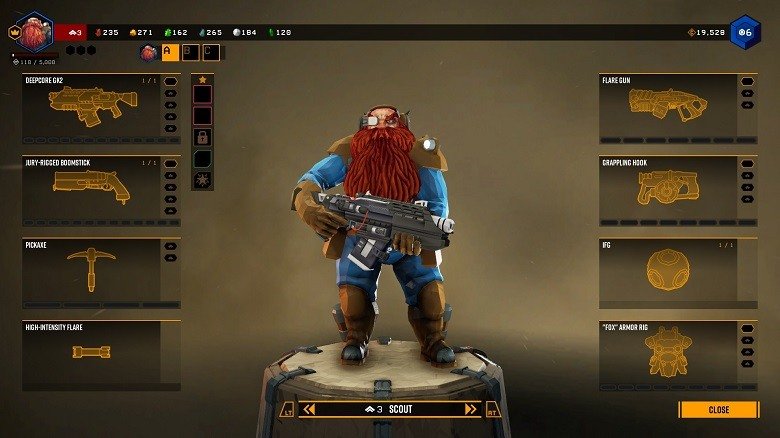 Combining the above scout tips with some of the best Deep Rock Galactic scout builds will set you up for the highest chance of success when playing as this class. The scout has several key choices to make when creating the ideal build based on your scout playstyle alongside a number of clear choices when picking modifications. Both of these are detailed below to give you the necessary information to allow for an informed decision as you play the scout class.

The scouts primary weapons are long ranged focus which helps the scout stand out from the other dwarven characters who are primarily close to mid range fighters. Each of them are equally viable although many in the community seem to favour the M1000 to play as a sniping dwarf as this is a unique option only available to the scout. Regardless of your selection you’ll be looking to stack damage on your primary weapon to boost their deadliness. 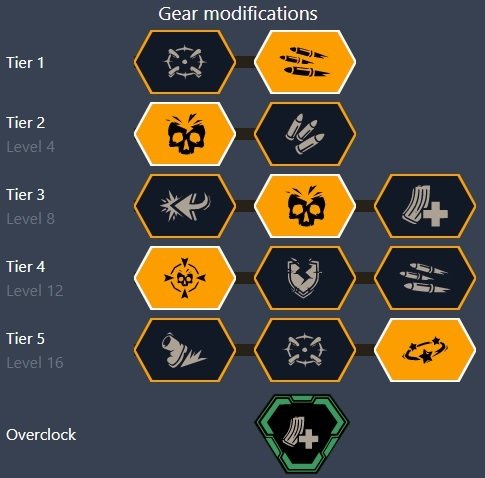 Deepcore GK2: The scout default weapon which is the balanced option and is good at range but equally reliable at close and mid ranges as you run, gun and grapple around the map. These playstyles are reflected in Deepcore GK2 build modifications you can take with multiple decision points on whether you want a deadly ranged weapon or a run and gun option (both covered below) and pairing it with raw damage mod options. This is also true for the overclock options with most being viable on this assault rifle provided it matches your playstyle although compact ammo is a good default. 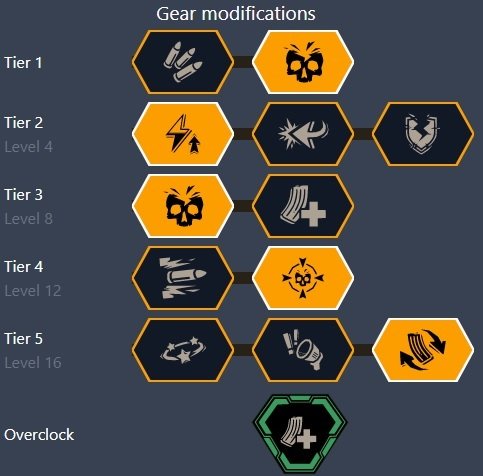 M1000 Classic: Moving your damage into the long range this is the sniper rifle equivalent of Deep Rock Galactic and ideal for those that want to take long ranged shots at the swarm. If you’re in a pinch it can still hold its own in close quarters although you’ll likely be better served by your secondary weapon selection at that point. To assist with sniping the M1000 Classic has an alternative firing mode that zooms the weapon slightly and gives you a 100% accurate bullet with boosted damage which consumes 2 ammo. A M1000 build is slightly simpler than your other primary weapon option and focused on enhancing this charged shot to ridiculous damage and utility. Like other dwarves this option is available to the scout after reaching level 10 and completing the appropriate mission. Drak-25 Plasma Carbine: An extremely fast firing rifle although not as accurate or hard hitting per shot as your other options which means its unlikely to become your default weapon for most of your mining adventures. Given it’s a plasma based weapon the Drak-25 does have the benefit of not having to reload and instead uses a heat based mechanic similar to other Deep Rock Galactic weapons. For a Drak-25 build you’ll be looking to focus on boosting the strengths of this weapon further and utilising the available overclocks to find something that suits your particular playstyle.

Both of the scout secondary weapons are vastly different from your primary with both having a close range focus for when the enemy catches you off guard. While used significantly less than your primary don’t underestimate either of these capable weapons that you’ll likely be using for the softer foes you encounter. Jury-Rigged Boomstick: The initial starting secondary for scout players this shotgun can be useful for both single foes or targeting weak points of larger ones. It’s biggest drawback is the double barrel design which effectively gives you two shots of pellets for foes before needing to reload although this means it is deadly at close range. The Boomstick options are diverse in the later tiers and overclocks to the point where most of these options are viable. With Auto Reload players can flick their shotgun out for a quick burst before letting it reload in their pocket which works great with the assault rifle on switch or instead players can use Fear The Boomstick when near swarms to take some heat off yourself and teammates while White Phosphorus Shells gives you some area of effect potential. Personally I prefer the latter two options to add some important boosts to dealing with swarming enemies and counter that weakness of the scout. 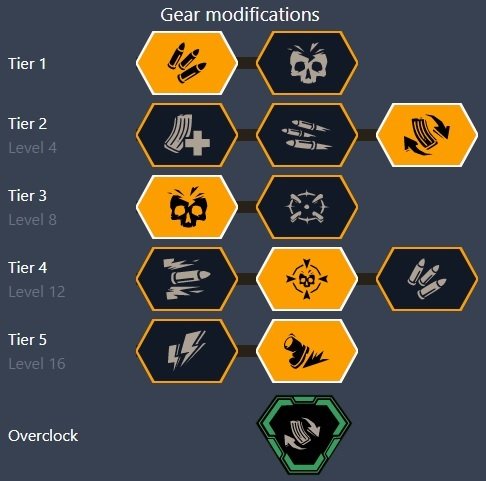 Zhukov NUK17: Your alternative secondary that swaps the shotgun for dual small machine guns that offer slightly more range than the shotgun option. These will quickly chew through ammo and reloads when firing so taking some modifications in your Zhukov build to alleviate these effects will serve you well. Their use case is quite similar to the Boomstick overall and designed for basic enemy clean up or unleashing some quick burst DPS into a powerful enemy weak point.

Scout equipment like other dwarves is one of the most defining characteristics of the class and focused on scouting the map through speed and vision. While many know the scout for his unique solo grappling hook many players are unaware of the useful flare gun to assist your allies in searching the dark caverns as it often goes underused by new scout players. 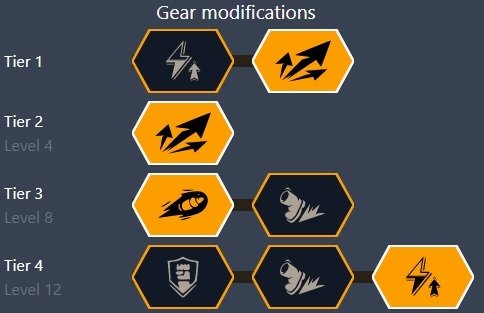 Grappling Hook: Arguably the most fun and dangerous piece of equipment on any dwarf the grappling hook can quickly cause scout death when first playing but with practice allows the scout to fly circles around enemies. When trying out the scout class consider using the Hover Boots perk to save your teammates (or Bosco) from having to revive you after a falling death. Unlike other movement based utility items in Deep Rock Galactic this not something that other classes can use to assist with their own movement. Upgrades focus on giving you more range and uptime as these are your biggest limits to effective use. 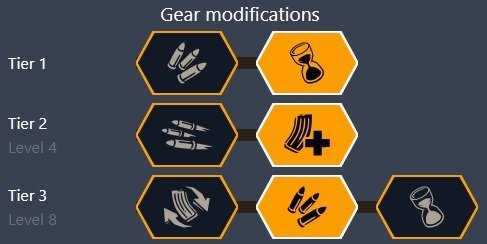 Flare Gun: An often overlooked utility skill of the scout that can separate the good from great scouts. With regular but careful use you’ll be able to easily locate minerals and threats and should be your default option when entering new dark caverns that need illumination. Mixing some ammo and duration modifications gives you a good default balance on this utility equipment but players can easily focus on either depending on the mission type. For example increased ammunition is often better on maps with lots of small caves that you quickly move through while longer duration shines where there is less movement between locations required. 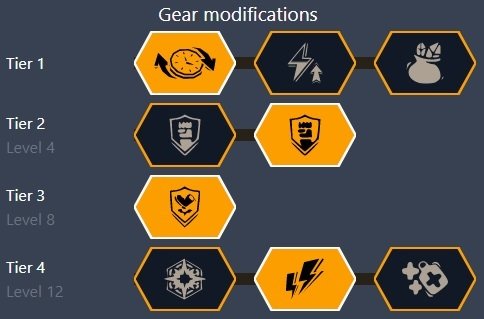 “Fox” Armour Rig: The scouts armour comes with Shock Absorbers for damage resistance reflecting all the falls you are likely to make during your grappling hook adventures. Otherwise the upgrades can be catered towards your preferences although as a scout the options below are a good starting position and applicable in the majority of situations.

The scout has three options to select from when it comes to throwable items that provide additional utility to your kit and offer limited direct damage compared to his counterparts. All three are viable options in your mining campaigns as each has their use cases so don’t be afraid to swap regularly between based on the hazard level, your team setup and the mission at hand.

Inhibitor-Field Generator: The throwable with the lowest number of uses this option is let down primarily by the small effect area although this is offset with the higher carry limit of 6. While it won’t stop a large swarm coming from multiple directions its ability to slow down a narrow passage or particular enemies can be valuable when used well.

Cryo Grenade: Adding a cryo variant to the scout’s arsenal the cryo grenade can completely stop enemies in their tracks and has double the effective radius of the Inhibitor-Field (6m compared to 3m). This makes it more viable for large swarm control although needs to be carefully positioned and timed. It is capable of fighting larger dreadnoughts but you’ll have to use two grenades to obtain the freeze effect on these enemies.

Pheromone Canister: The favourite of most scout players due to the insane utility this can provide across a range of situations, it’s also exceedingly satisfying to watch the carnage unfold when used. When thrown this canister creates a pheromone on enemies that encourages nearby enemies to attack them and provide significant breathing room for your team when used while also damaging the swarm numbers. With a total duration of 10 seconds it is also more than capable of allowing you to revive a friend.