Choosing the best Diablo 2 mercenary (or merc) for your character is a vital consideration in your ease of progression and often overlooked by the new D2 player for just how powerful they can be, particularly for the solo playthrough. With the right gear they can become a powerful ally against the armies of hell but before you can create the best merc build for them you’ll want to be starting with the right base. This base factors in hiring your mercenary from the right story act and with the right speciality for your objectives.

The details below in regards to the Diablo 2 mercenary setup are applicable for both Diablo 2: Lord of Destruction (D2) and Diablo 2: Resurrected (D2R) as the core mechanics are unchanged between game versions. Note that patch 2.4 for D2R in April 2022 provided a significant overhaul to the mercenary mechanic and generally provided buffs and additional offensive options to these AI companions which are noted throughout this guide where relevant. The Diablo 2 wiki on mercenaries is also an invaluable source for those that want the granular details and numbers of the below recommendations that are explored below at a summary level in this D2 merc guide. At the end of this guide I’ll also cover some of the best merc armour, best mercenary weapons and runewords for mercenaries to ensure your companion is appropriately equipped for battle. Diablo 2 Mercenaries – Different In Each Act

Like many other games like Diablo players can recruit an AI controlled ally to fight alongside them. In Diablo 2 specifically each act offers different themed mercenaries that can be hired to fight for the player and come with their own strengths. When considering which act has the best mercenaries players need to consider what each offers in terms of abilities but also the type of weapons they can equip as this is fundamental in their power level. Note that prior to the Diablo 2: Lord of Destruction expansion players could not equip their hirelings with items and with this game mechanic added players can now significantly boost the damage of their mercenary companions.

The Diablo 2 mercenaries from each act can be summarised as follows: Given the overwhelming power of the auras that the Act 2 mercenaries provide they are widely considered the Diablo 2 best merc option and made only more useful by the powerful rune words you can make with their weapon class. The two most popular are Infinity for the Conviction aura (to reduce enemy resistance) and the budget Insight for the Meditation aura (mana recovery) although there are a host of other deadly damage dealing high level runewords available if you require neither of these. While the D2R mercenary rework patch of 2.4 did allow for some of these powerful runewords to be made in new weapon bases the inherent aura of these mercenary options is simply too powerful to look past. 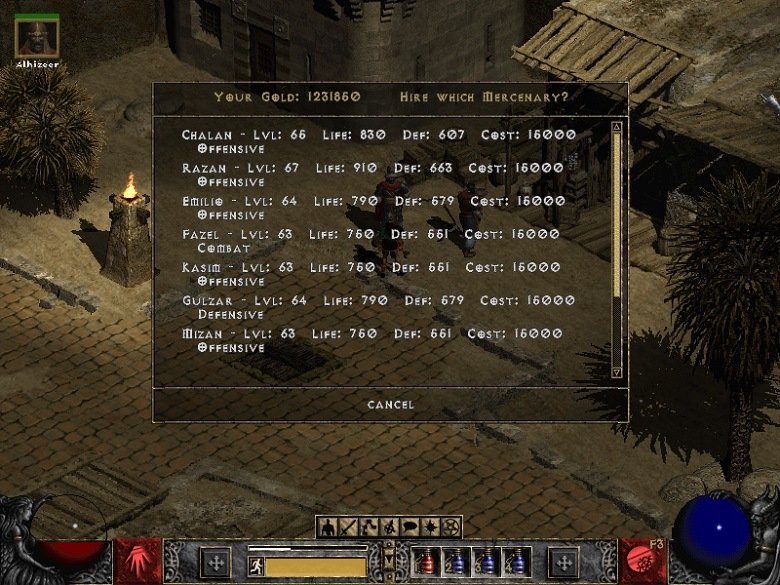 Act 5 mercenaries are a viable alternative to Act 2 for those that want to experiment with something different or for specific builds. The Lawbringer runeword is a popular choice as it offers a Sanctuary aura to remove physical immunity while providing further utility with Decrepify and the rare slain monsters rest in peace. All of this can be useful on characters with mostly physical damage, need a reliable tank to provide some crowd control or regularly farm undead areas and is most often seen on wind Druid builds. With the D2R changes giving these fighters some Barbarian shouts their utility is one of the best after the Act 2 variants.

The Best Act 2 Merc In Diablo 2

With the options laid out your decision for Diablo 2 AI partner quickly becomes limited to an Act 2 mercenary hired from Greiz in Lut Gholein. Choosing the best Act 2 merc for you is thus the main mercenary decision that you’ll make in Diablo 2 and often comes down to your playstyle and class build although there are a few clear winners to select from. The usages of each possible Act 2 mercenary is explored below in a mini Act 2 merc guide and I’d encourage players to experiment with the available options before making a final decision (don’t forget to unequip any gear you have on your current hireling before hiring a new one). 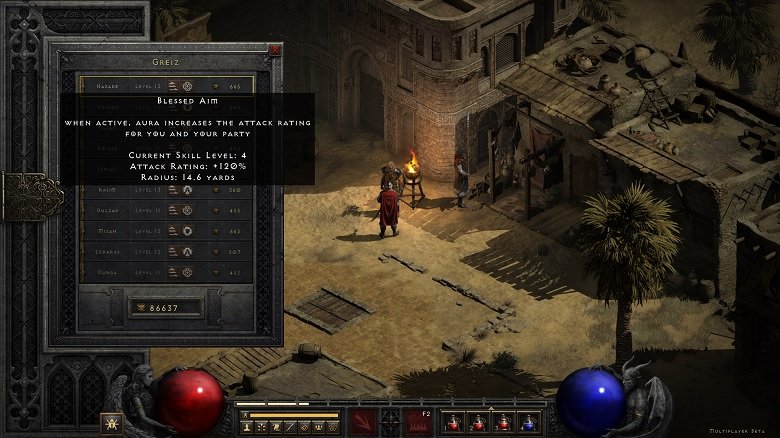 The Act 2 merc auras are as follows, note that in Diablo 2: Resurrected the mercenary types of Combat, Defence and Offence are no longer used from the original Diablo 2 and you can mouse over the skill icons next to their level to see what aura the mercenary has. Note that in D2R players can hire any of these auras in Nightmare and Hell and are no longer act restricted.

For those that want a quick best to worst tier list of Diablo 2 Act 2 merc I would rate them as follows:

Each of these D2 Act 2 merc auras is explored in further detail (in order) below. 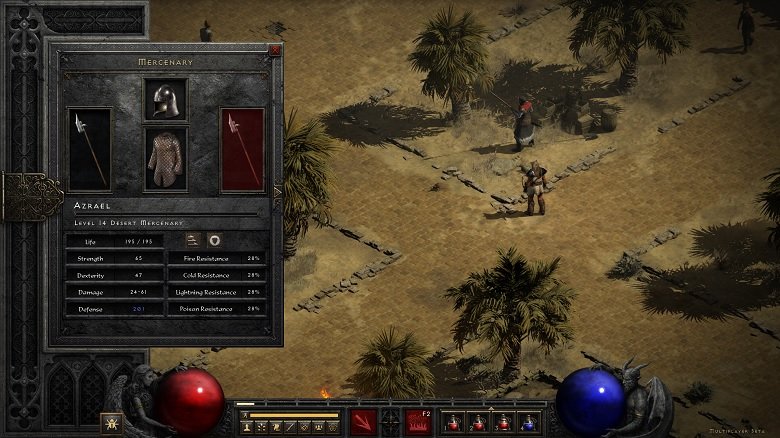 The most popular of all Act 2 mercenary auras for the majority of Diablo 2 character builds (but not all) and the one that many consider the Diablo 2 best merc due to the crowd control that the Holy Freeze aura provides. With this aura you’ll be able to easily run past enemies and slow them from attacking you passively that makes it useful in the vast majority of situations you’ll encounter. I also consider this to be the best merc for Hammerdin builds once you have enough mana sustain gear. Even a cold based sorceress can benefit from this mercenary option as Holy Freeze can still impact cold immune monsters giving you additional survivability from your biggest threat.

Without a doubt this is the Diablo 2 best merc for summon Necromancer as it can dramatically boost your skeleton damage with the aura active and when paired with your other spells like Amplify Damage is deadly. Might is also highly effective on well geared melee fighters that don’t need the other available auras here and want to boost their own damage or looking to make their mercenary into a deadly killing machine in their own right with the correct gear. Beyond these specific circumstances though Might is rarely going to be your first pick. 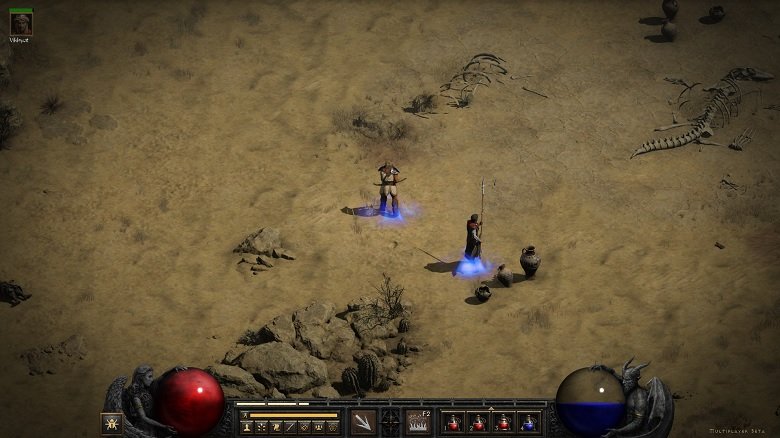 For the player that likes to have their health regularly topped off with healing Prayer is actually quite effective when paired with an Insight runeword that doubles the healing effect due to the way that Prayer and Meditation auras interact. I’ve constantly used Prayer on my late game cold Sorceress builds as I find the other options lacking with this build once fully geared and I value the ability to completely disregard any small pieces of damage I pick up along the way when magic finding.

Prayer is also the best mercenary aura available for normal for most players and can definitely save you on health potion usage and trips back to town. Don’t get too attached though as you’ll likely replace them in Nightmare with a Holy Freeze mercenary (unequip any gear you have given them first).

With this in mind I’d consider this one of the best merc for Sorceress (cold specialisation) when you reach your final build for magic find runs although Holy Freeze is generally a better option during your path there and most other class builds.

Blessed Aim can be a viable mercenary as you progress through the game for the melee fighter, particularly if you opt to rush through Diablo 2 quests and do little levelling given levels play such an important role in hitting enemies. Given the other Normal difficulty mercenary options in Act 2 this is not a bad pick but beyond that is likely to be sub-optimal. The creative Diablo 2 community has made some unique mercenary builds with high crushing blow percentages and Blessed Aim to ensure your mercenary regularly hits their target for those that want to try these out although they are niche off meta choices used for the sake of doing something different more so than anything.

Provides a solid boost to your defensive statistics for both you, your mercenary and any summoned minions that improves survivability. While this concept might sound good in practice it’s actually one of the less desirable auras due to the way the aura and defence in general works in Diablo 2.

In brief defence reduces the chance of your character being hit from physical attacks, does not impact the damage you take, has diminishing effectiveness and is severely reduced when running. This combination of mechanics means that low defence characters like the Necromancer or Sorceress benefit little as they are likely to rarely be hit by physical attacks while characters with high defence values like the Paladin who fight in melee range already have sufficient defence that it is not a significant change in percentage chance to be hit especially when factoring the loss of a better aura option.

While fun to experiment with on a summon Necromancer build as you watch demons hurt themselves on your skeletons and golem of choice this aura has the least uses of all your options and best avoided unless you are looking to experiment for fun or variety and not recommended for use in this Diablo 2 mercenary guide.

While choosing the correct mercenary is important equipping them with appropriate gear should never be overlooked and in fact required if you expect your Act 2 mercenary to survive for longer than a few minutes. The below equipment guide to your mercenary is focused solely on the Act 2 mercenary although some parts will be applicable to other mercenary types you might be experimenting with.

At the core you are looking to achieve the following from the limited equipment slots (weapon, helmet and armour) that your mercenary can equip. The below includes the best mercenary armour, best mercenary weapon and mercenaries runewords to consider when building your ally.

Sam has been playing the Diablo franchise for over two decades and has beaten Diablo 2 with all characters over that time both alone or with friends. His favourite character in Diablo 2 is the Sorceress for her strong cold area of effect abilities and teleport.