Games Finder’s Dungeons 3 Golden Pickaxe locations guide will help you complete the Dungeon 3 special event and unlock your unique in game rewards. Here at Games Finder we love the Dungeons 3 experience (read our review here) and have spent over 100 hours across the campaign and DLC content, primarily playing the individual levels co-operatively and experimenting in the skirmish mode on Diabolical difficulty.

Like many Dungeon 3 fans we quickly searched high and low to obtain all of the Dungeons 3 Golden Pickaxes (affectionally known as “Picky”) in order to unlock the secret event content and to help our fellow Dungeons 3 fans we’ve curated all the locations with screenshots to help you track them down for yourself alongside other important information and Dungeon 3 strategy tips for your hunt.

What is the Dungeons 3 Golden Pickaxe Event?

In case you missed the announcement you can read it in full on Steam. The key thing to be aware of is that from April 15th (and running indefinitely) the Dungeons 3 in game Golden Pickaxe Event rewards players with in game goodies and a secret reward if they can track down all the pickaxes. There is a single pickaxe within the campaign levels alongside one for each DLC released so far. 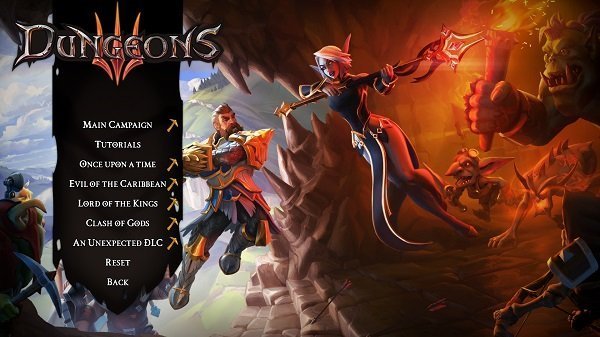 Below is the possible location of every Golden Pickaxe across the main campaign and the respective Dungeons 3 DLCs, keep in mind that the location within the level is randomised so use this guide as a starting point only, spoilers ahead!

Main Campaign: Everything has an end…
Possible Locations: Northeast corner or Northwest corner

If you had intended to play through the main campaign from the start to find the pickaxe it would have been a very long process to dig out every single level before finding it on the last mission. Thankfully with the knowledge from this guide you can skip right to the last level where players have reported Northeast (shown) and Northwest locations proving fruitful. The level itself can be played in a normal manner as you’ll have ample time to dig out the entire map before you opt to challenge Tanos. 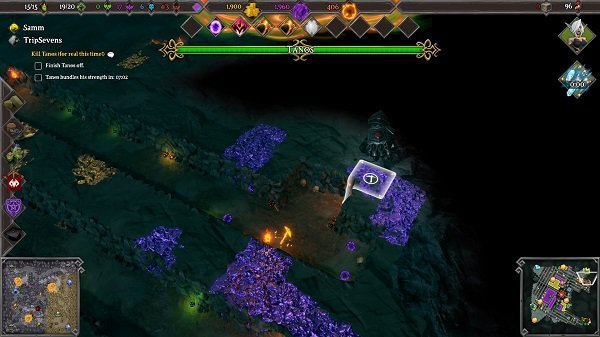 Once Upon A Time DLC: Fog and Sheep
Possible Locations: West below the dungeon entrance or South underneath the southern entrance

A level that rewards early and quick aggression when all the heroes are turned into sheep you can make some strides early. This map is also straightforward with players again being in control of when the map ends as it is tied to taking over the 3 factories. The Games Finder team located our pickaxe to the West below the entrance although other players have reported success on the Southern side instead. A slightly trickier level to beat although players are still in control of when the map ends. By obtaining a few of the dungeonheart upgrades you can make the experience easier as the tentacle attacks deal direct damage. On this level your best chance for the pickaxe may be to the far West or East near the dungeon entrances. 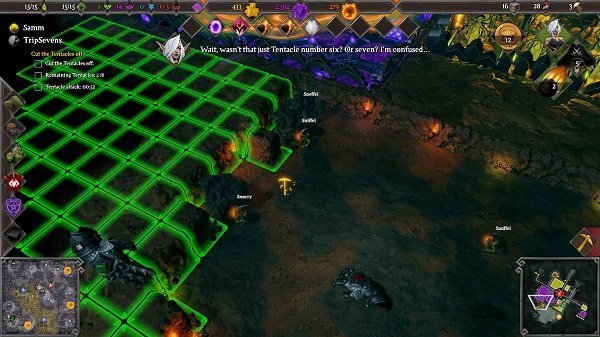 Lord of the Kings DLC: The Fellowship
Possible Locations: South of the dungeonheart

The hardest level of them all to obtain the Golden pickaxe on due to the time limit placed on the map and the healthy force you’ll need to defend the Converted Heroes camp. We were able to find the pickaxe south of our dungeonheart directly west from the southern dungeon entrance which other player reports support. 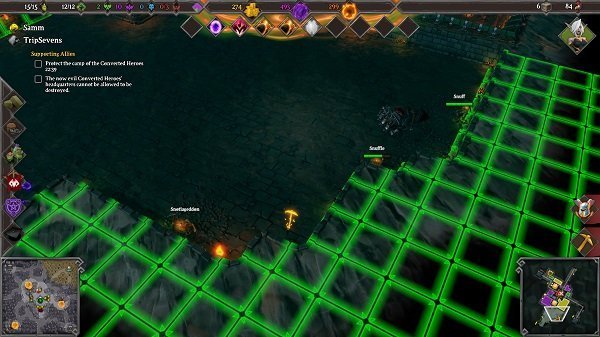 Clash of Gods DLC: At the Foot of Godsmount
Possible Locations:Southwest corner or Eastern wall

The find that took us the longest of all the golden pickaxes in this locations guide with the entire map dug out it was hiding within the last dozen blocks with our little snot Sneffel quickly picking it up to triumphantly deliver it to our dungeonheart. While it was located in our southwest corner we have read reports of the pickaxe alongside the Eastern wall. 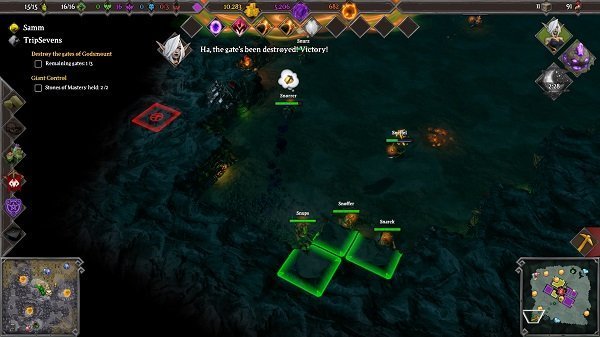 Hiding in the final level of the Unexpected DLC is the last Golden Pickaxe for collection. As this map ends with you defeating the Forest Queen there is an unlimited amount of time to find the pickaxe allowing you to take your time and establish a strong force as you would normally before digging out the map and making your move on the Forest Queen. She can dish out quite a bit of damage so Mana Shield is a useful addition to your arsenal in this level. The pickaxe has been found in both the Southwest and Northeast corners of the map. 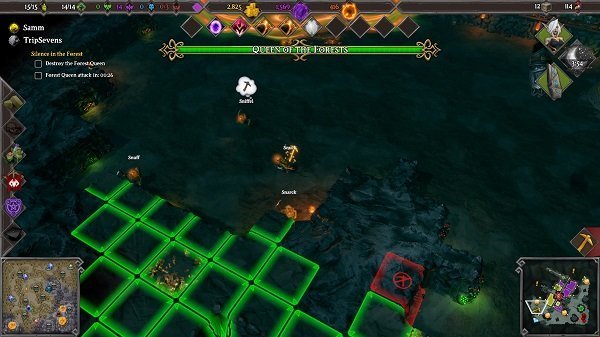 Famous Last Words: Show Us What You’re Made Of
Possible Locations: East of the dungeonheart

With a new DLC released on 18 May 2019 fans of Dungeons 3 had another Golden Pickaxe to track down to complete their collection (which will also turn all of your little snots into little robots). The level itself has a number of twists so don’t be fooled by the powerful force that you start with, you’ll want to build them up further with key research trees.

Locating the actual pickaxe itself is random as are all the levels but the Games Finder team found ours on the East side of the map as shown below. 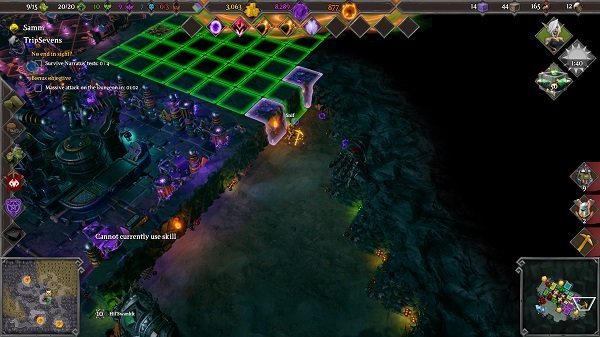 Hopefully with the use of our Dungeons 3 Golden Pickaxe locations guide you’ve been able to locate all 6 of the Golden Pickaxes and claim your additional content. Did you find one in a location not listed above? We’d love to hear from you in the comments below.

Dungeons 3 Golden Pickaxe Rewards – What Does It Do?

Congratulations you’ve collected all of the Dungeon 3 Golden Pickaxes in the event! Your reward is called “Fuzzy Logic” which turns all of your little snots into robots.

In order to activate the golden pickaxe reward from the main menu visit the “Extras” menu then click the “DLC” tab where you’ll find the option to turn the new little snots on or off. Here is what the option looks like in the menu: 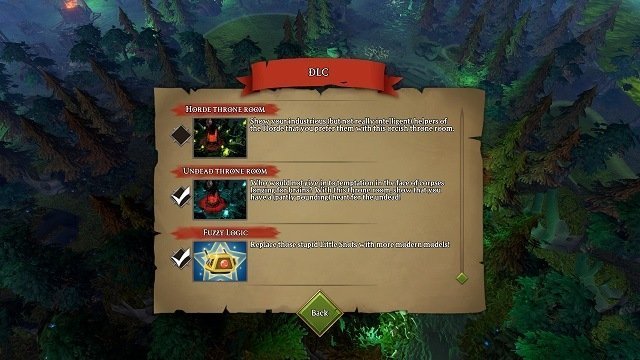 And here is what your little snots look like in game: 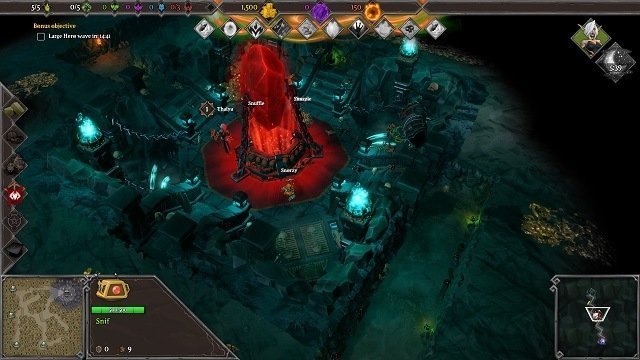