This guide to the Fallout New Vegas (FNV) best melee weapon options ensures players are appropriately equipped for a melee build playthrough which is one of the most challenging paths for players to take. While a niche build in Fallout New Vegas it does attract many players seeking a fresh challenge for their next Mojave Wasteland adventure with a number of key equipment pieces required to give you a fighting chance. For those that don’t mind the added initial challenge that a melee build has you’ll be rewarded with devastating late game power once you meet the core progression requirements that allow the build to shine.

To help you reach this point in a melee specialist playthrough this guide details some of the best weapon options that you can acquire along the way to help you plan ahead and ensure you are capable of beating the game with this niche build. By pairing this guide with careful choice of starting special stats, the perks you take with each level, the equipment you use and your general playstyle approach to the various missions you’ll be on the path to melee character success. 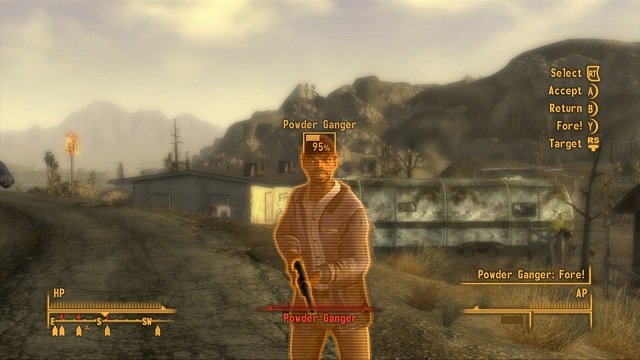 This melee weapon guide for Fallout New Vegas focuses on more than just raw damage numbers for weapons though by considering any utility weapon availability factors to ensure you have a potent melee weapon at all game stages. For each weapon on this list we have included the location to obtain it, the weapon requirements (for effective use) and the base damage of the weapon (before your specific character skills are taken to account so the actual damage value in your Pip-Boy will be higher).

Note that this page does not discuss the best unarmed weapon in Fallout New Vegas and focuses on melee weapons only from the base game and the respective Fallout New Vegas DLCs. Accordingly beyond this point you will find various FNV spoilers related to equipment, quests and locations.

While damage is an obvious factor to consider when deciding on the best Fallout New Vegas melee weapon this is just one element to consider given many of these high damage weapons don’t become available until later in the game. This can leave players without a reliable melee weapon throughout the bulk of your adventure when you need it most given you will lack sufficient other equipment and perks for your melee build. For this reason the following factors have also been considered when designing the list for this page: 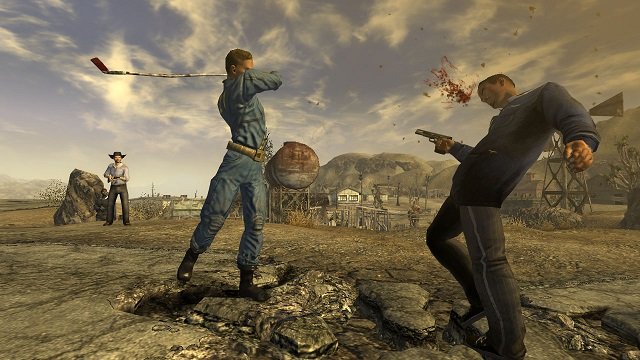 Located north of your starting tutorial location (Goodsprings) players will want to venture to the tribal village map location where you can find the grave of Chance who was once a powerful member of the Great Khans to obtain this weapon.

Chance’s Knife is easily one of the Fallout New Vegas best melee weapons given it is relatively easy to obtain at the start of your adventure. Despite being obtained early on it has significant power compared to other options available at this stage and as a result is a staple of your melee build for much of your adventure. With the right perk choice as you level up Chance’s Knife can even be your main weapon until your choice of Fallout New Vegas ending. This unique melee weapon is designed to be an improved variant of the combat knife and can maintain its power given it can be buffed further by both the Cowboy (+25% damage) and Grunt (+25% damage, Honest Hearts only) perks. In addition to this Chance’s Knife offers a bonus critical chance effect to further boost damage and can be concealed which opens up some opportunities in the broader Fallout New Vegas storyline quests or for pure roleplaying reasons.

Available after players complete The Launch in The Lonesome Road DLC you’ll find this in a street lamp to the left of where you leave this quest area (Courier’s Mile) so outside of completing the DLC content is easy to obtain when you know where to look.

Unlike Chance’s Knife above which is available right at the beginning of your Fallout New Vegas adventure the Blood Nap is only acquired after you have completed a significant part of your story. With Lonesome Road intended as a pinnacle piece of content you simply won’t have many adventures left to use this unique melee weapon which is based on the Bowie Knife also added in this DLC. That being said the raw power of this weapon makes it difficult not to include on a list of the best melee weapons in Fallout New Vegas. This power level comes from the high base value and boosts to critical chance/damage on the weapon which allow it to reach some of the highest DPS values of the melee weapon archetype. The weapon also comes with a bonus to the sneak skill although this is unlikely to be a major consideration at the stage of the game that you acquire this weapon. Important to note that unlike it’s smaller cousin above (Chance’s Knife) it doesn’t benefit from the Grunt perk as it is not considered a Fallout New Vegas combat knife but the higher base values make up for this loss of bonus damage.

Located in the Camp Searchlight Fire Station players can use the key from Logan to visit the upstairs bathroom stalls where this unique fire axe sits next to a skeleton in one of the cubicles (requires repair before using).

While not the strongest of melee weapon options in Fallout New Vegas in terms of raw damage this is one of the few two handed weapons available during the mid game and well ahead of similar options available at this stage. Even the base fire axe is quite deadly against low health enemies with this unique variant adding an additional 20% damage over the base version. Even against durable enemies the large nature of this weapon means that it comes with the Mauler special attack which gives you the potential for knock down chance. Unlike the knife based options above so far on this list the Knock Knock has low attack speed and critical modifier so your focus will be on large single hits rather than rapid attacks.

Available from Charleston Cave this is another weapon you are likely to come across in the mid game of your Fallout New Vegas adventure although you an bring this forward if you specifically focus on visiting this location. It’s significantly easier to locate by starting the Guess Who I Saw Today quest as this will load a Nightkin NPC next to the item although the weapon appears in the open section of the cave regardless.

Like the Knock Knock this two handed weapon is focused on large single hit values and hits as hard as you would expect given the high strength requirements. Based on the super sledge weapon variant which are a staple weapon of high level Super Mutants players can now serve them a taste of their own medicine with this slow but deliberate weapon. The lack of speed on this weapon stops it from being a meta late game weapon option and it also suffers from a faster degrade pace than other options on this list which can be annoying to constantly repair.

Available from several merchants if players have the Gun Runner’s Arsenal (GRA) addon installed this New Vegas weapon is surprisingly powerful given it is available from NPCs. This availability includes Vendortron at Gun Runners, the arms merchant at the 188 Trading Post and Cliff Briscoe at the Dino Bite Gift Shop.

Purchasable from merchants allows players an easy to acquire weapon option provided you can reach the respective location and the required caps. While this weapon does exist in the base Fallout New Vegas game and is still effective without the GRA DLC it earns a significant boost from this DLC due to the addition of 3 mods that players can install. These modifications decrease the weight, boost the damage and improve the maximum durability that all help the weapon reach a new power level while reducing the repairs required. The Chainsaw is most notable though for its ability to avoid damage resistance and damage threshold that ensure it stays deadly against even heavily armoured enemies. As a result even if you don’t intend to use it as your main melee weapon having it in reserve for particular enemy encounters is an attractive option.

Added in Old World Blues there are a small number of these available for players to acquire and one of the few top tier weapons in Fallout New Vegas to have multiple locations. These locations include The Cuckoo’s Next, Big MT and the X-13 research facility which gives players a few options to cross obtain a Protonic Inversal Axe.

While the Protonic Inversal Axe doesn’t compete with the raw damage of the other large two handed weapons it has the benefit of bonus damage against robots or power armour users which make regular appearances in certain areas of the game world. Like the GRA Chainsaw above this makes it an ideal weapon to bring along with you while adventuring to have in reserve for locations that have a significant number of these enemy types. The large durability is also an added bonus and particularly useful if you forget to repair it between these ad-hoc uses. The unique visual aesthetic of this weapon is also unlike other effective melee weapon options in Fallout New Vegas with a distinct dark violet blade compared to the light blue base variant of the Proton Axe.

Another Gun Runner’s Arsenal (GRA) weapon this is acquired from the Vendortron on this tier list of best melee weapons in Fallout New Vegas which like the Chainsaw is easy to acquire and deadly.

This flashy flame based weapon serves as a unique Shishkebab variant with upgraded damage and with the right perk (Pyromaniac) can push up against the higher melee weapons in terms of damage output. Available at level 12 the Pyromaniac perk does allow players to create a fire weapon based character with the Shiskebab also providing decent damage until players can unlock this upgrade to push their damage potential further. Players do trade some weapon durability by making this switch but the Gehenna does still have solid durability when compared to other melee weapons despite what you might expect from a weapon that is literally on fire.

A difficult to acquire weapon with players often having to go hunting for this weapon from various merchants or enemies (a full list is available on the wiki) with non being a guaranteed location for players.

Despite being difficult to acquire the Thermic Lance is a melee weapon in Fallout New Vegas to keep an eye out for given the massive base damage offered by this weapon and the ignore damage resistance/threshold similar to the Chainsaw also included. As a result there are really no enemies in the Mojave Wasteland that can stand in your way when using this weapon which will carry you through to your choice of game ending once acquired. As if that wasn’t enough for this weapon option the Thermic Lance has an insane amount of durability so repairs are rare even when using this weapon constantly to progress the story. If you can get your hands on one or don’t mind hunting for it this is a worthy addition to your core equipment for a melee build.