With this guide you’ll learn the Fallout New Vegas best starting stats (SPECIAL) for your specific build to ensure you get the most from your Courier character. While your ultimate choice of starting SPECIAL is heavily influenced by your choice of Fallout New Vegas build there are some important cut off points to be aware of when designing your character for a fresh run through the Mojave Wasteland. These can either give you important utility or a significant jump in power that is simply too large to ignore and could hamper your build effectiveness if not reached.

Whether you want to play as melee, unarmed, stealth, guns or energy weapons you’ll find useful tips to your SPECIAL selections below. With this knowledge you’ll be equipped to make informed decisions about starting SPECIAL with the intent of this guide to focus on guidance and tips rather than hard rules so that you can maintain your own character RPG style. 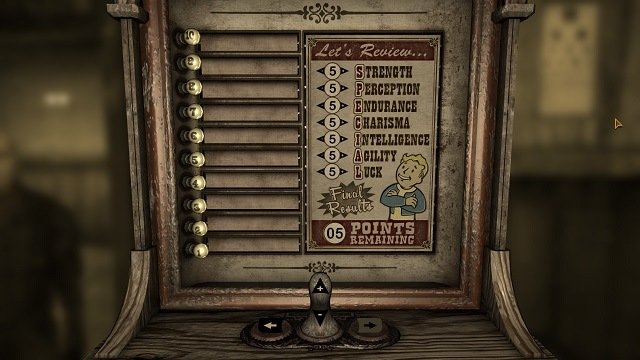 Your Fallout New Vegas starting SPECIAL (S.P.E.C.I.A.L.) are permanent decisions that players make in regards to their character strength, perception, endurance, charisma, intelligence, agility and luck. With each impacting your playthrough in different ways this is a difficult but important decision that should be based on your objectives and specifically intended playstyle. While there are some ways to boost your SPECIAL stats in Fallout: New Vegas during your adventure these also require you to plan ahead if you wish to use them effectively. When starting a new character players have a total of 40 points to spread across the seven different attributes.

For Fallout New Vegas (and the applicable New Vegas DLC) this includes:

Note that unlike other games in the Fallout franchise there is no Bobblehead like mechanic that gives you a rare collectable item to chase around the Wasteland for SPECIAL stats.

Instead players will need to rely on the Fallout New Vegas implant mechanic which limits the number of implants you can acquire to your endurance level. There is an implant for each SPECIAL along with a damage threshold boost and a regenerate health option. The damage threshold option is a decent option and actually adds a reasonable amount of survivability to the player while the health regeneration is utility based given there are other methods available to heal your character.

Importantly these implants are not available if players are already level 10 in a SPECIAL and while the endurance implant does not allow you to take another implant for free all of the implant boosts to SPECIAL is a factor in determining your eligibility for perks that have minimum SPECIAL requirements. For this reason the more endurance you can fit into your Fallout New Vegas starting stats the more overall SPECIAL you’ll be able to have in total. The trade off being that players will sacrifice some of that SPECIAL to invest in endurance at the start of the game until they unlock the medical clinic and the required caps to purchase the implants.

You should factor in your total starting endurance into the guidance below with the recommended numbers shown on this page referring to what your goal for ending SPECIAL should be after implants. These recommendations also do not take into account the NPC conversations impacted by particular SPECIAL stats. Strength primarily provides a boost your your melee damage (and skill) and carry weight. A smaller amount is also required to properly utilise ranged weapons without a penalty to your accuracy.

This makes strength an obvious investment for players attempting a melee based playthrough as the additional damage is an effective option to boost damage from start to end while also allowing you to obtain some appropriate strength based perks to buff your best melee weapon damage. The carry weight is also a nice quality of life and ranges from 160 at level 1 strength to 250 at level 10 strength with players that like to hoard items going to want some investment. For characters doing a ranged playthrough you’ll find that the vast majority of weapons require a strength of 6 to use effectively although there are definitely a few popular weapons like the anti-material rifle that requires 8. Note there is a perk (weapon handling) that reduces strength requirements for all weapons by 2 though. 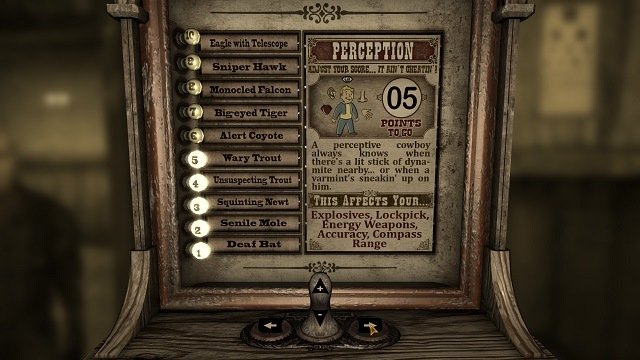 Perception in Fallout New Vegas boosts the skills of lockpick, explosives and energy weapons. There is also an impact to the distance at which your character detects enemies which only has an extremely minor gameplay impact.

Perception is nice for a character that intends to specialise in energy weapons given the boost to that skill although is not a requirement given that a lack of endurance doesn’t stop you from reaching max energy weapons skill. Players who intend to fight from long range or utilise sneaking will benefit from investment in perception given it makes several perks available that can significantly boost your damage in these situations although for other players perception represents an opportunity to remove SPECIAL points and place them elsewhere. Impacting on the players ability to survive the harsh world of Fallout New Vegas endurance is also an important SPECIAL as it drives the number of implants the player character can have. Endurance modifies your health, resistances to poison and radiation, healing rate and boosts the survival and unarmed skills.

Endurance is one of the hardest SPECIAL decisions to make given it influences your implant options which means that every point in endurance can be turned into a SPECIAL of your choice or combat boost. Characters that expect to take significant damage from their build playstyle or are attempting hardcore mode will benefit from higher endurance in particular. Charisma in New Vegas provides a boost to your followers armour and damage at 5% per Charisma level while also giving your barter and speech skills a boost.

While it can be a fun idea to maximise this to create a deadly Fallout New Vegas companion they are already quite strong at a base level and limited more by their AI than raw stats in their combat effectiveness. Similarly the boosts to barter and speech don’t have a dramatic gameplay impact in the early game and can be obtained without the investment in charisma through skill point investment that you gain on each level up instead. This leaves charisma to be one of the weakest SPECIAL stats of Fallout New Vegas and an easy first choice to steal away points to place them into other SPECIAL stats that you desire.

Notable perks with charisma requirements (base game and DLC) include: Intelligence boosts the number of skill points that players gain upon level up which can have a large impact on your character’s growth as you adventure through the Mojave Wasteland.

Notable perks with intelligence requirements (base game and DLC) include: Agility is designed with gun based builds or those that want to do some early game sneaking and will benefit from the skill modifiers. If you prefer to use V.A.T.S. for the bulk of your fighting you’ll also want to consider a health investment in agility given it can translate to an additional attack or several (weapon dependent) and it gives you access to key action point perks. The added utility of gun reload is also a quite quality of life to save time in firefights and make lower magazine weapons stronger overall. The Gauss rifle reload time for example goes from a ~4 second reload at level 1 agility and drops to a ~1.5 second reload at level 10.

Notable perks with agility requirements (base game and DLC) include: Luck gives players a small modifier to all their skills which improves the all rounder effect of your character (although is only plus 5 at level 9 or higher Luck). Luck also boosts your critical chance with each level adding +1% although the usefulness of this is also dependant on your choice of weapons. Note that once luck is at least level 7 you’ll have a reliable method to earn caps by visiting the locations at The Strip as your odds are improved by this SPECIAL stat.

Luck investment is ideal for someone who wishes to have a consistent method to acquire caps which with some time investment can remove the need to loot and sell items to merchants for the rest of the game. Stealth or critical focused builds should also have a healthy investment in luck given the limited sources of critical chance they want to maximise. These critical builds generally utilise melee, laser weapons or specific traditional guns (rifles or shotguns).

Notable perks with luck requirements (base game and DLC) include: