For The King Strategy Guide – Tips For Winningy

Read our detailed For The King strategy guide ideal for the beginner or advanced player seeking tips on their way to winning in the difficult roguelike strategy adventure ahead.

Like many in the roguelike genre For The King is not an easy experience and even includes a disclaimer on game load to ensure players understand the difficulty level that they can expect. It is not a game players are expected to beat on the first or even tenth attempt with many mechanics to learn and plenty of randomisation weighing down your progress. With this guide, tips and included strategy players will be able to move the odds into their favour across all of the available campaigns. Having personally beat all the campaigns on the hardest difficulty with many hours invested to do so I’ll share the most important tactics to improve your adventure.

This strategy game guide is not intended as a step by step companion or playthrough of each campaign. Instead it introduces you to important concepts and strategies that you can apply in broad situations so you can be confident in your decision making regardless of the situation. While this guide will be invaluable for beginners to For The King those looking to optimise their runs as advanced players or complete the Master difficulty can also expect to learn some new tactics.

This guide will cover the following topics in detail: 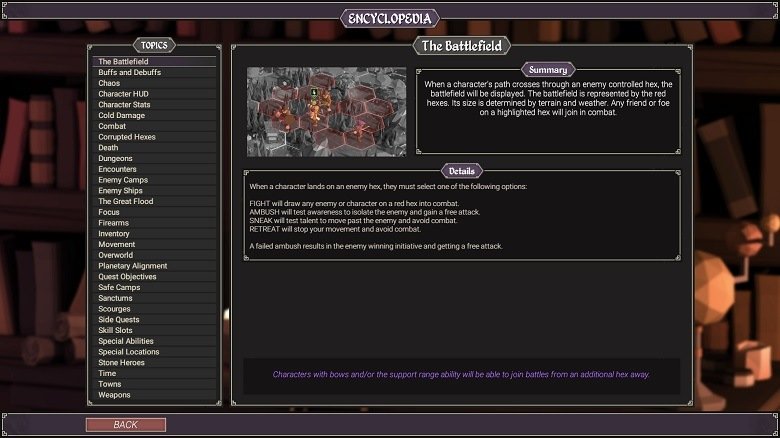 While reading these sections I recommend that any terms you are unfamiliar with in this guide that you consult either the in game encyclopedia that IronOak Games have made accessible through the options menu (help) or the For The King wiki.

For The King Campaign Guide

Intended as the core campaign of the franchise this campaign sees players adventuring across the land to avenge the fallen king and solving the mystery through locations such as the Forgotten Cellar. Chaos is the primary mechanic you’ll need to overcome and forces players to keep a consistent pace throughout which can be difficult given a number of steep jumps in difficulty for objectives during the campaign where your adventure will often end. The diversity of the biomes you face is also one of the highest that can introduce a large pool of enemies and additional mechanics to learn.

The best strategy to use in this campaign is highly efficient movement balanced with constant experience gain from enemy encounters. The decent number of sea caves in the ocean areas can assist with this while providing a decent amount of lore to spend in the lore store and advance your account progression along with the powerful pearls within them for the final boss fight which is a significant challenge as it is multiple back to back battles. The Frost Adventure campaign is easier in some regards as there is no chaos like mechanic that pushes players forward at a fast pace which allows you to slowly move throughout the world and build up your strength without pressure. The balance to this though is the freezing weather players encounter that means you will not gain health at the end of your turn and actually take damage (up to 5 in end game) when exposed to the cold elements. Players also have limited access to towns as they are lower in number and first need to be freed from enemy sieges before being accessed.

With the above in mind the best strategy for Frost Adventure is to maximise your time spent in the earlier game levels to bolster your strength and then propel you through the late game quickly. If you’re struggling to secure a victory in any campaign then the Frost Adventure can remove some time pressure and give you an opportunity to slow down the pace of For The King. Before attempting Frost Adventure though I recommend you unlock the useful Inferno gear set from completing floors in the Hildebrant’s Cellar as it provides a large amount of health regeneration to offset the cold weather health loss.

The perfect campaign if you are a For The King fan of sailing that introduces some new enemy types, encounters and the wet status that removes immunities. While Into The Deep replaces chaos with a flood mechanic it is vastly more relaxed especially when you factor in the faster movement offered by boats as you can move your entire party at once. This campaign also gives you flexible objectives with the water temples scattered around the map and an optional challenge on your path to your main goal, the Kraken God. This final battle is also one of the few in For The King that is not multi stage so the final fight can be easier than those you’ve experienced in other campaigns.

In this campaign opting for a team that has strong talent secondary stats to help your movement is likely to deliver the best results. In addition you can use the additional time due to the slow flood mechanic to maximise your character levels, items and consumable to make the final fight a simple battle. Designed as an infinite dungeon for players to test their combat abilities the cellar is a simplified offering as it removes overworld movement entirely. Instead players will fight a random scourge at the end of each dungeon level along with trap encounters to overcome. With less mechanics the cellar can be a straightforward challenge and also worth doing as it unlocks useful lore store items previously noted (Inferno gear).

For strategy Hildebrant’s Cellar success relies heavily on your team composition and players that favour combat characters that have high speed are likely to do well. It’s not uncommon to use duplicates in this mode either as you have less pressure from diverse events to counter with the Hunter being a popular selection of the community.

A campaign that uses similar mechanics to the main For The King campaign but simplifies the story by having players chase down 5 hidden dungeons and clearing them of evil. This means your strategy needs to have an even stronger on careful character movement as not only do you need to stay ahead of chaos while gaining levels, you’ll need to uncover the hidden the dungeon tiles. With revealing hexes as a goal in this mode your characters can often be split which creates its own problems for combat.

To add further difficultly to this mode players will start in one of three random biomes that requires significant adjustment to your early game and makes certain attempts significantly tougher. The strategy to counter this is similar to the core campaign with no time wasting, using speed focused characters to help movement and taking as many favourable fights as possible to not fall behind in levels. 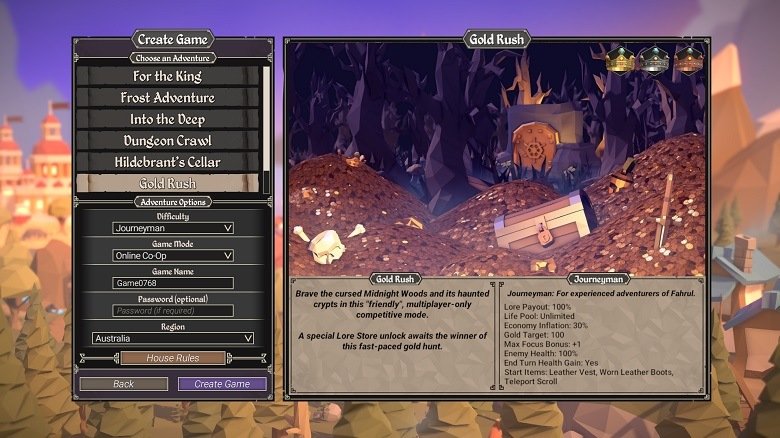 Uniquely designed as a competitive mode this For The King adventure is designed for players to use un co-operative means to become victorious. With the goal to be the first individual character to earn 100 gold and return it to the vault of Fergus its a character eat character challenge for you and your friends for bragging rights and unique lore store cosmetics.

This game mode uses a unique small landlocked world while also providing players endless lives. To prevent your opponent from being first players can use a range of creative strategies that leverage game mechanic understanding. This includes activating fights for your team that are unwinnable before running away, pulling them into a dungeon, taking all the good items and manipulating last hits on enemies to claim the coin drops for yourself.

Serving as A For The King DLC this adventure challenges players to explore the lost world that hides ancient secrets. With the DLC adding a large number of new enemies, biomes and 2 new game characters it significantly alters the experience. Replacing chaos with planetary alignment this campaign features familiar challenges around moving quickly while managing your limited resources that means the Lost Civilisation winning strategy is similar to the main campaign.

For The King Difficulty Guide

All of the campaigns offer three difficulty levels that change your potential for success and ultimately give you more room to make mistakes and still recover an attempt. The three difficultly levels from easiest to hardest in For The King are Apprentice, Journeyman and Master which impact the following in game mechanics (note that some of these can be modified via the house rules option to create a custom game difficulty).

Choosing the correct characters for each campaign is a significant first step to success in For The King. To help with this we’ve written a specific For The King classes guide to help you select team composition and the characters for your adventure given the large amount of detail to cover that goes well beyond this beginners guide.

With your team selected though there are some important tips and tricks to using them to maximum effectiveness in overworld map movement, events and combat.

Every character has several statistics that have different uses during a For The King campaign and others that are acquired through equipment progression. The details and uses of each stat are as follows and need to be considered when designing your team:

For The King Resource Management

While For The King is sold as a roguelike strategy game the secret to victory comes down to careful and optimised resource management. So what exactly are the resources you need to manage and how do you go about it in practice? In this section your entire perspective of For The King will change and your odds of victory vastly improve as a result.

For The King General Tips & Tricks

Below are a broad range of For The King tips to round out this game guide which don’t fit into other categories but are key pillars of any strategy. Like the rest of this article you’ll find a mix of beginner tips and more advanced tactics that are not immediately obvious.