Discover the FTL difficulty differences and specific adjustments to make for each difficulty as you progress through Easy, Normal and Hard modes. Faster Than Light is a difficult video game which challenges players to beat the odds by taking their selected ship from the initial sector to the final sector showdown against the powerful Rebel Flagship. Whether you’ve played roguelike titles before or this is your first time you won’t achieve success.

With failure though comes an opportunity to learn from your mistakes, master mechanics and unlock new ship variants that may just give you an edge if it is one of the best FTL ships available. This article summarises the difference between FTL difficulty settings with some basic tips on how you’ll have to adjust as players go from Easy to Normal and Hard modes. Note that on release Faster Than Light only had Easy and Normal mode with the Hard mode being added with the release of the Advanced Edition and this difficulty guide contains some minor spoilers on game mechanics. In practice in FTL Easy Mode:

If you’re considering FTL easy vs normal mode for your first playthrough starting with Easy Mode is likely your best option even if you are experienced with games similar to FTL as it allows you to learn the basic mechanics and overall game formula while reducing frustration. This mode is also ideal for experimentation with the various FTL ship systems, augmentations and weapons that the game offers. Normal Mode in game is detailed as: Standard scrap rewards and enemies.

In practice in FTL Normal Mode:

Normal Mode provides a balanced experience of challenge and enjoyment once you understand the core mechanics and is the standard Faster Than Light difficulty setting. It was also the highest difficulty available prior to the Advanced Edition being released. 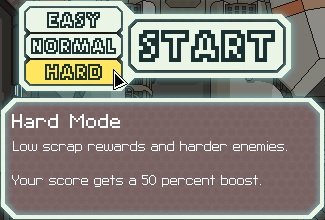 Hard Mode in game is detailed as: Low scrap rewards and harder enemies.

In practice in FL Hard Mode:

Added with the Advanced Edition the Hard Mode offers the ultimate challenge to space explorers and requires both a sound understanding of mechanics, utilising the best FTL weapons and a bit of luck for success.

Sam has long enjoyed Faster Than Light (FTL) and regularly returns to the game for its randomisation and challenging mechanics. He has beaten FTL with all ships and layouts but enjoys the starting Kestrel Cruiser over other options to defeat the Rebels.