What happened to Millsberry and why did it shut down? This popular online game by General Mills was a pioneering website before going offline in 2011.

Here at Games Finder we have a video game database of over 2,000 titles (and growing everyday) across all genres and modern platforms. Part of our goal to becoming the number one game recommendation website on the web is ensuring that all our suggested games like lists contain only games that you can currently play.

This means that there is regular pruning of our database in order to not display games to our visitors that have either shut down or are simply not available for purchase anymore. Since we started in 2013 we’ve had to remove over 300 games from our database due to the rate of which games go offline or cease sale, the amount is quite staggering at nearly 1 game a week!

In order to pay homage to the video games and even gaming websites of the past Games Finder is starting a series of posts called the “Gaming Archive” where we explore games (or websites) that have shutdown or been lost to time for whatever reason. It’s our hope that these small artefacts within our gaming archive articles can serve as a reminder to the loyal followers and preserve some of gaming’s rich history.

While some of these shutdowns receive lots of press and interest there is a large range of games and websites that quietly fade away with a small loyal following which leads us to our topic of the day, Millsberry. For those unfamiliar Millsberry was one of the original web based games intended for a child aged audience. Released in mid 2004 Millsberry was online nearly 18 months before the popular Club Penguin franchise. The game would be online for just over 6 years with a final Millsberry shut down date of 31 December 2010 leaving players with a handful of wallpapers, printables and a customised yearbook as a final farewell to the game.

Millsberry was linked to the General Mills company who used a range of product placements within the game as a marketing tool of which they were one of the first to do so. Several cereal releases from the company also cross promoted the game to encourage children to join the online neighbourhood of Millsberry.

The game world of Millsberry was referred to as the neighbourhood where players with their own customised Buddy character could explore. A daily login bonus of Millsbucks was provided to players which allowed them to participate in home decorating, yard sales, shopping (food, pets, clothing) and play a range of arcade games and mini games (e.g. fishing). Each of the games and even some locations had strong links back to General Mills products.

Millsberry was also designed as a social hub for young gamers including the likes of profiles to feature your favourite colours, hobbies or personality and music tastes. This sort of formula was replicated by a number of games similar to Millsberry that launched after Millsberry.

We’ve curated a few of our favourite screenshot memories of Millsberry from around the web below:

One of the earliest screenshots of the Millsberry.com website going back to 2004, showing the promotion of other kid friendly content (Madagascar movie) alongside the news headlines for Millsberry and the promotion of healthy living which was a mainstay of the website. For those that spent a lot of time in the arcade you’ll recognise the Millsberry arcade as the place to experience all sorts of interesting games that also tied into stats (fitness, civics, intelligence) or rewards. 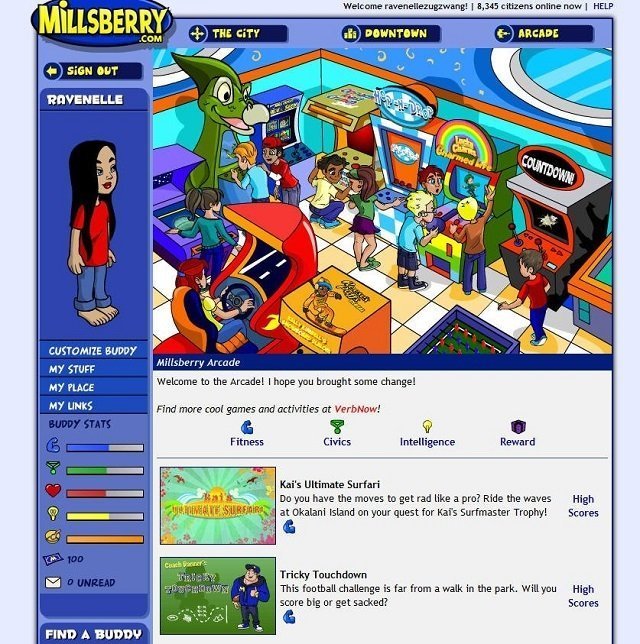 Next up is the recognisable character change screen where you could customise your buddy with glasses, eyes, mouth, shirts, jackets, pants, shoes and other misc items. Another common screen the neighbourhood view is shown below with all the popular Millsberry locations such as Metro Park, Ravenwood, Golden Valley and Lakeview. One place you’ll navigate to form the neighbourhood view is the grocery store where Millsberry helps players to budget out their Millsbucks to purchase produce, visit the deli or pick from the range of General Mills breakfast cereals. 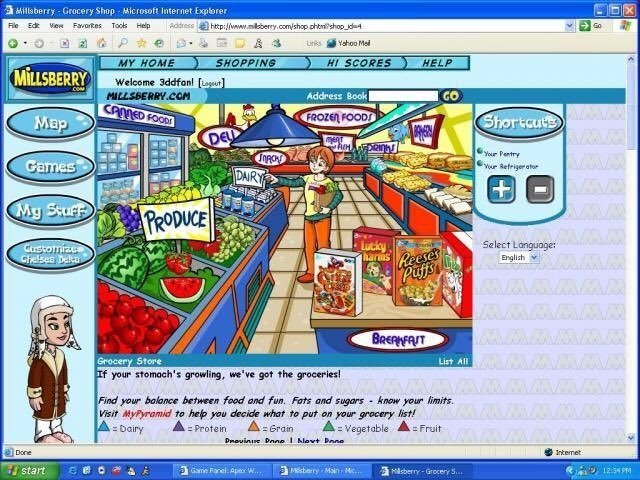 Lastly one of the saddest screenshots of Millsberry is the closing announcement when Millsberry decided to shut down against reducing player counts.

If you’d rather watch a video to be nostalgic about Millsberry we’ve collected a few of the most popular Millsberry videos on the web below.

That concludes our first in our gaming archive series where we explore video games and websites in the gaming niche that have shutdown.

Did you grow up playing Millsberry? Be sure to leave a comment of your favourite Millsberry memories below.