This Gloomhaven guide to the Scoundrel will set you up for success from level 1 to 9 as you take this high damage character through the difficult and diverse scenarios of the campaign. In this Scoundrel guide we detail each of the cards, the associated builds, perks, enhancements and items to maximise your power as the character and in turn be an important party contributor in both 2, 3 and 4 player party sizes. Serving as a rogue the Scoundrel takes clear inspiration from familiar role playing archetypes and fills the role of a nimble damage dealer in Gloomhaven that is always interested in acquiring gold along the way. As a result the Scoundrel is a master of damage output with an emphasis on dealing damage that is empowered by nearby allies or the lack of nearby enemies. Other themes include invisibility, status effects, high move values, looting and ranged throwing knives with the main trade off being a limited hand size that puts you at risk of exhausting earlier than other characters. This hand size also hinders the potential to play loss cards as part of our core strategy as you simply won’t be offering enough damage to your team outside of short scenarios.

With this design in mind the Scoundrel is best placed in a party with other melee characters that can both absorb the attention of enemies but also allow you to flank their enemies for the additional damage this provides to Scoundrel cards. The Scoundrel has medium durability overall although their smaller hand size than other similar characters means absorbing damage is far from your priorities in a scenario. It is also worth noting that despite the high damage this human character does lack area of effect attacks and are designed to be a single target specialist. In smaller parties in particular your positioning is vital as the Scoundrel as your quick movement, low initiatives and general requirements for attacks often have you on the knife’s edge of taking damage from enemies.

Designed as the only human starting character in base Gloomhaven the Scoundrel is portrayed in game as a human that has cast aside any resemblance of complex human society in favour of a self serving approach that is part of their combat theme of capitalising on opportunistic situations. Leaning into this design is the best way to build your Scoundrel by focusing on single target damage and grabbing negative status effects where possible to boost our own damage or that of allies. Building from your level 1 cards the Scoundrel is one of the more straightforward classes for card choices often having a clear stronger card that serves as a replacement to a themed card from earlier levels that either adds better move, damage or status effect but seeks to serve a similar role in your hand.

If you are unsure of your choice of Gloomhaven character refer to our Gloomhaven classes summary article or Gloomhaven tier list to help make your decision. 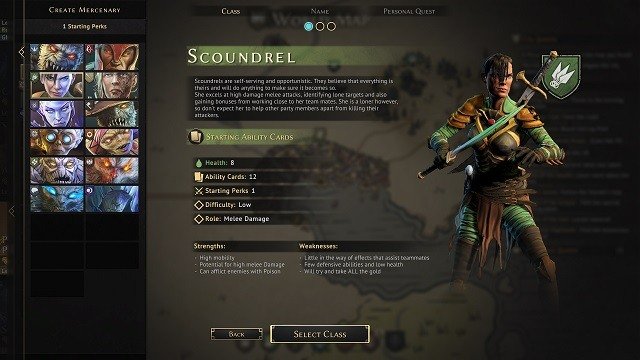 This section of the Scoundrel guide is designed to be a quick reference sheet for how to build a Scoundrel while playing and selects the options that are generally going to be the best for a broad range of playstyles, party sizes and party dynamics. It does not cover other potential options which are discussed in the detailed section where applicable for players who are on the fence about certain card build choices and want to dive deeper into the reasons for certain choices which may or may not apply to your circumstances. As noted in the introduction to this Scoundrel guide you’ll find the best results by optimising your already strong focus on single target damage and having a melee ally fighting alongside you to help your damage output. This guide and in particular this overview section assumes you have met this prerequisite and are focused on maximising your damage role rather than attempting some of the small other niches the Scoundrel can explore. 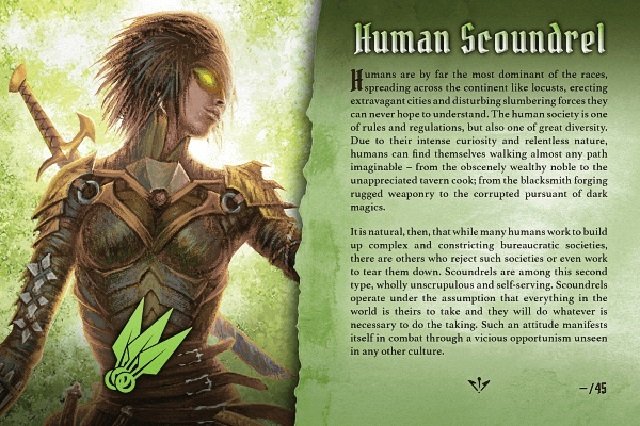 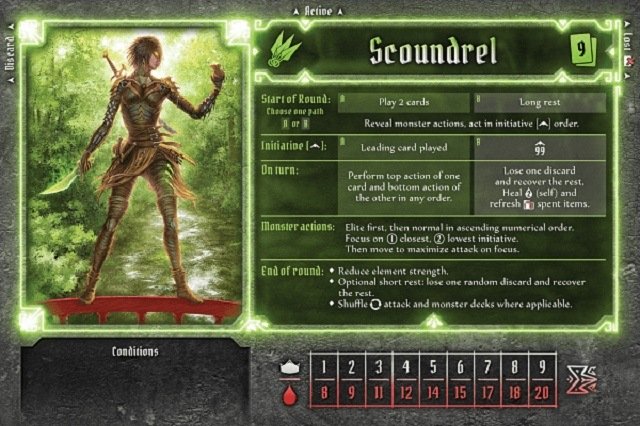 This section of the Scoundrel guide dives into the individual cards and their use cases for players to consider in designing their hand as they progress scenario to scenario. The Scoundrel’s progression is somewhat unique in Gloomhaven in that they have some of the easiest choices upon level up that makes each of their card decisions quite straightforward overall. That being said which cards you swap out for these Scoundrel card unlocks along the way actually has a lot of flexibility based on your playstyle and party members. As a result you might prefer to keep a useful card to you for a few extra levels and drop another card in its place from the summary guide above. When playing the Scoundrel players should also play close attention to the scenario objectives as some of your sideboard cards are fantastic to swap in and out regularly when the time calls for it and something you need to pay attention to as the Scoundrel more than other Gloomhaven characters.

The Scoundrel cards detailed below are presented in level order and includes discussion of party mechanics and scenarios that the cards excel in and why certain cards provide more value as level up choices. 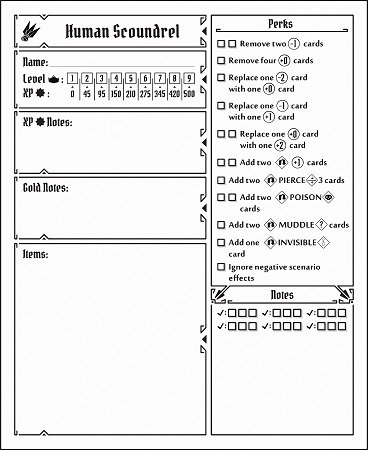 Scoundrel perks are similar to other Gloomhaven character choices with your goal to take out all the negatives that we can and replacing them with either zeros or positive numbers to ensure our damage has greater consistency. Once you build up the deck enough you can trim away the zeros and also look to add negative scenario effects ignore into the mix that can help you counter any potentially crippling scenario debuffs that you might start with.

Beyond this point players need to be careful of adding too many rolling modifiers to the Scoundrel so limiting it to the plus ones and invisible are good choices. This is because the way rolling modifiers function in Gloomhaven in that they can actually turn an attack into a miss as they keep rolling modifiers after the first which can be painful when triggered on one of our big combos against a boss or similar deadly enemy. 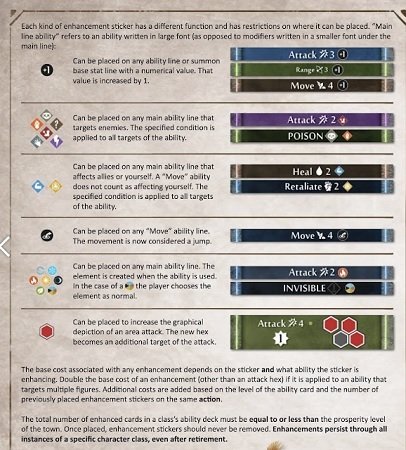 Scoundrel enhancements are designed to fill some gaps in our hand that give us an easier time to deliver on our goals of looting the map and dealing damage to anything that stands in our way. Initially adding a move to the bottom of Swift Bow is a cost effective option that is both a useful addition to our movement and an investment in the future as it gives us greater loot potential which we can leverage for future necessary enhancements. Second to this we can add jumps to the likes of Flanking Strike and Flurry of Blades which stay with us for our adventure and help to overcome our weakness of high movement cards that lack jump which can be situationally useful for positioning.

Timing of adding a dark element the bottom of Open Wound is an important highlight though as it helps us setup the deadly Stick to the Shadows when empowered so this should be your goal just prior to level 7 and takes precedence over other options. The last important enhancement to acquire although lower priority than the others here is boosting our Smoke Bomb combo with strengthen which adds just a bit more teeth to this although is a one time per scenario play. 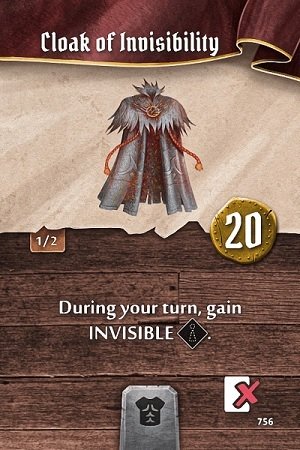 Scoundrel item choices are what you would probably expect from this class in Gloomhaven although the order may be slightly different to your usual character building. In this case the Minor Stamina Potion is number one priority as the Scoundrel desperately needs it early on to give our small hand a little more longevity before purchasing other items. Cloak of Invisibility is a clear second buy for the Scoundrel as it allows us to deliver some of our combos with ease while allowing us to recover from a mistake in position as well.

Next we can look towards boots such as the Boots of Striding but only if another party member doesn’t need them as the Scoundrel already has a wealth of movement and this is a greedy play to empower Swift Bow more than anything. Failing this we can take Winged Shoes to help us until we enhance jump on our cards or wait until one of the higher prosperity shoes becomes available. Following this we will want to grab the usual Stamina and Healing potions that melee characters want for the added card usage that we are desperate for and a way to recover some of the damage we will likely have to take.

The head slot for Scoundrel is less of a priority (dependent on party composition) but the Iron Helmet is a cheap effective option early game before higher prosperity options become available while also considering a Minor Health Potion around this time. The Scoundrel’s character design does allow it to make use of a range variety of unlockable items and without spoiling these you’ll want to keep an eye out for equipment that rewards you with added bonuses for long moves, allow you to summon an ally to empower your attacks when in a pinch, add area of effect to your attacks or allow you to manipulate enemy movement.