This guide to the Killing Floor 2 Berserker will provide you the best weapon, build, perk and loadout setup that will allow you to survive in the deadly solo or multiplayer environment filled with ZED waves. The Berserker is not shy at getting close to these ZEDs though with their focus on melee weapons that is unique compared to the other perk classes that primarily use firearm based weapons. Not only does this create a different playstyle compared to other character options in KF2 but also bestows a level of durability that others lack while still retaining sufficient damage to handle various ZEDs.

Within these various melee weapons players will find some utility to separate these weapon types from each other such as explosive or healing alternative fire modes which do use ammo to activate like other Killing Floor 2 weapon options. To help achieve this playstyle the Berserker perks include melee weapon damage, resistance to damage, a resistance to Clot grabs and night vision capability (similar to the Commando perk class). Paired with the active skills designed to boost your health, provide health regeneration, additional resistances and empowering your ability to parry the Berserker has all the necessary tools to stay in the fray. Generally you’ll build the Berserker around your first tier of perks that create either a tanky focused character (known as a dreadnaught) or a melee damage focused character (known as a skirmisher).

The Berserker guide below provides details to help you create your ideal build by providing tips, strategies and initial perk loadouts. This foundation is based on the selections that are effective the vast majority of the time regardless of map, difficulty and party dynamics to give a beginner starting point or intermediate reference guide. From this foundation players can then slowly branch out and experiment as necessary based on the specific challenge at hand. For those players still determining if the Berserker is the right Killing Floor 2 path for you our class perk guide discusses and rates all of the perk options.

These tips and strategies to playing the Berserker will help players optimise their effectiveness in solo and Killing Floor 2 multiplayer lobbies: The Berserker has the following perk bonuses at maximum level:

The Berserker has the following active perk skills to select from:

Notable active perk skills when playing as the Survivalist are:

Given the above the best Berserker per setup will be RRRLR as your default option. For players that want to shift to a durability focused build for a team composition you can swap to a LRRLL setup or a LLRLL that utilises Vampire for additional sustainability. 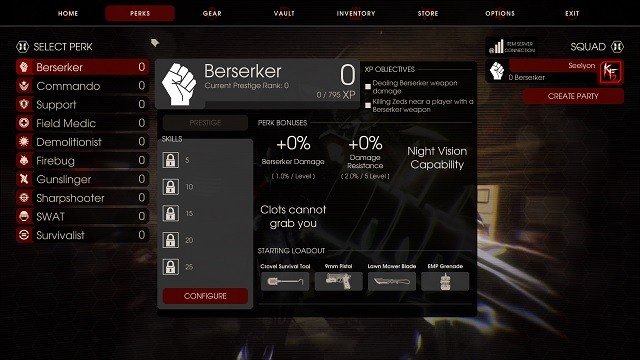 In terms of Killing Floor 2 best berserker weapon options you’ll find that the Berserker has a smaller number of potential weapon loadouts than most of the Killing Floor 2 classes given many of your melee weapons serve a similar role and can be swapped out in most instances between each other to your own preferences. While most of these builds utilise dual melee weapons players can also utilise some ranged weapons if the team composition calls for this. The best Berserker weapon loadouts that players should be striving for as the Berserker are: