Our Killing Floor 2 Commando guide will set you up with a build that contains the best perks and weapons loadout for you to be an effective solo or co-operative class against the endless of waves of ZEDs that you will face. The Commando is a popular class for many new players with their simple core formula which is focused on dealing damage with assault rifle weapons while ignoring precision in the process. This class of weapons is the pinnacle of reliable damage against weak and medium tier ZED Specimens with their moderate magazine sizes allowing you to spray and pray with the right ammo perks.

With the assault rifle as your foundation the Commando brings some flexibility to the table and can manipulate their selection of weapons and available perk skills to push themselves towards damage, support or some light tanking. Your unique abilities when playing as this perk class are the ability to detect cloaked ZEDs for your teammates and also display health bars which can significantly improve your teams ability to focus fire if used correctly. Commando’s also have night vision available and have the potential for a large number of ZED time resets which increase as you level up this perk class to max level.

This guide to the Commando is intended to provide you a starting point for your Commando journey by detailing the strategy, tips, perks and best weapons that combine into a build that offers you the best chance of success. Given Killing Floor 2 (KF2) has many variables in each match such as difficulty, map and party members though it cannot account for every possibility so players should always adjust as they feel is appropriate when you become an experienced Commando player. To help decide whether or not the Commando is the Killing Floor 2 perk for you visit our perk guide tier list article.

To utilise the Commando at maximum effectiveness players will want to consider these strategy tips based on the situation. 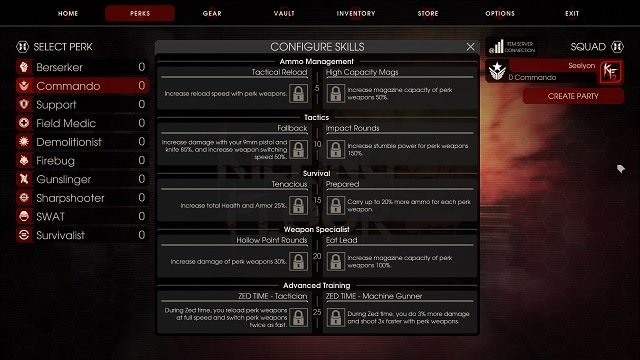 The Commando has the following perk bonuses at maximum level:

The Commando has the following active perk skills to select from:

Notable active perk skills when playing as the Commando are:

Given the above the Commando best perks setup is RLLLR as your default option. You can swap Tactics to R where the stumble utility is important to your team crowd control efforts to create a RRLLR variant of the standard Commando perk build. 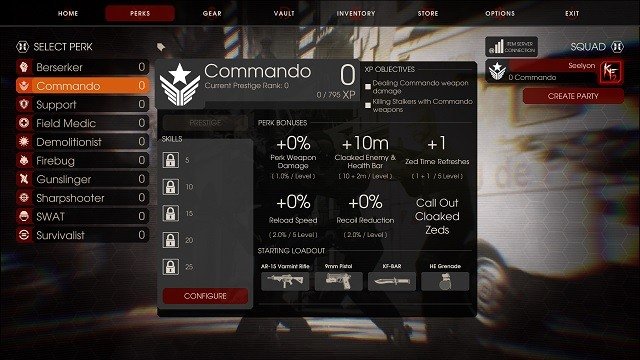 The Commando’s weapons are assault rifle focused and the vast majority of your weapon options although you also have some slower rifles and light machine guns with several of these also being perk weapons for other classes which still deal respectable damage. While your initial AR-15 in your starting loadout is an effective weapon during the early waves players will want to aim towards the notable end game weapon combinations below that serve as your best commando weapon choices: