This article provides a Killing Floor 2 Demolitionist guide for players to build their ideal chaotic class and maximise the carnage against waves of enemy ZEDs. The Demolitionist is an explosive class choice in Killing Floor 2 with a focus on grenades, rockets and even a stick of dynamite to counter small and large Specimens that spawn in waves. When not carefully using your destructive power against the enemy the Demolitionist can be found welding doors shut with explosive traps or passing around extra grenades to their teammates to boost their own utility. Combined this playstyle makes the Demolitionist a class that is comfortable running across the battlefield and between lanes to provide extra firepower when necessary.

Most notably the Demolitionist is a key counter to Fleshpounds with their weakness to explosive weapons which if left alone can dramatically disrupt your team and potentially end a run by themselves, with the right setup you can also counter Scrakes that are similarly deadly. While the vast majority of your weapon choices have a destructive element to them the Demolitionist also has a small number of rifles, melee weapons or the potential to utilise off perk weapons to provide some traditional gun based gameplay and conserve your explosions when necessary. The Demolitionist also has the fall back of high base damages on gun bash attacks although you don’t want to be in melee range often. With Reactive armour the Demolitionist is also their own personal explosive device with the ability to emit an explosion if you run out of health (limit once per wave). You thrive in larger teams where your ability to improvise for the situation is supported with some core classes of KF2. To reach the master ranks of this class you’ll also need to be careful on the trigger and consider the impacts that your explosives have on your allies.

This guide to the Demolitionist will give players a starting point to build from and adjust based on your own personal playstyle preferences. It’s intended to provide a full Demolitionist build covering strategy, tips, perks and weapon choices that when combined together provide a suitable default path to take for most situations. It is not possible to take into account every Killing Floor 2 situation though with team, map, difficulty and playstyle potentially impacting the perfect loadout so players should always adjust as necessary when you obtain sufficient skill as playing the Demolitionist. If you are still deciding on the best class perk option for you then visit our Killing Floor 2 tier list guide.

Playing the Demolitionist to maximum effect in a party requires a number of considerations which also ensure you stay friends with those in the lobby given your destruction potential. These tips and strategies ensure that this chaotic class perk delivers on its explosive promises: 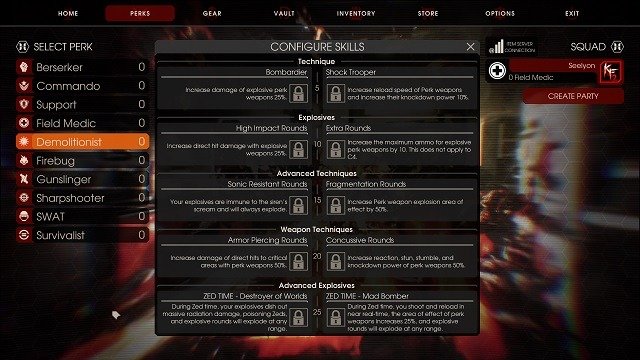 The Demolitionist has the following perk bonuses at maximum level:

The Demolitionist has the following active perk skills to select from:

Notable active perk skills when playing as the Commando are:

Given the above the Demolitionist best perks setup is LLLLL as your default option. That being said the Demolitionist has some flexibility based on your party needs and preferences so you can experiment with options like LLLLR (preferably with a good Commando) or LLRLL (focusing on low tier ZEDs only with a Siren killer on the team). 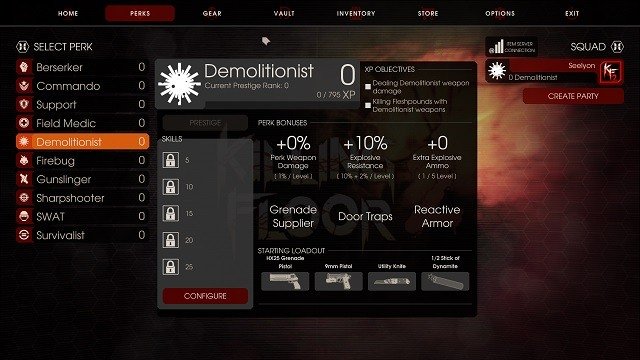 The Demolitionist is the explosive weapons expert in Killing Floor 2 which allows you to achieve your goal of low tier ZED killing on mass and supporting the take down of larger enemies when necessary. The vast majority of your weapons have an explosive component to them which you will want to lean into as much as possible while ensuring you have a backup option for clearing individual low tier ZED targets so you don’t waste your precious ammunition for a lone weak enemy. Like most Killing Floor 2 classes your initial starting loadout (HX-25) does a passable job but needs to be quickly replaced with higher tier weapons to remain effective. Your final loadouts to aim for when playing as the Demolitionist include the following Demolitionist best weapons: