With this Killing Floor 2 Field Medic guide players will be able to become the ultimate team healer or durable solo class in their ZED killing KF2 matches. This guide presents players that are new to the Field Medic class with the optimal choices in terms of perk skills, weapons and ultimately build loadout to fight through various difficulties, maps and party dynamics. As the name suggests your primary role as this class is to be the medic in the field who rushes between players to heal and buff them while attacking any low tier ZEDs in between. To support this playstyle players will have access to syringe upgrades, movement speed and durability boosts for your role although have a clear absence of weapon boosting perks like the other perk class choices.

In addition unlike other classes the Field Medic lacks a specialised weapon archetype and instead has a diverse roster of options that each have a healing dart or similar mechanic to heal your allies in the chaos of Killing Floor 2 levels. These weapons are still used against ZEDs though and range from pistols, submachine guns, assault rifles, shotguns and grenade launchers that allow you to tweak your playstyle for the map, party and personal preference. While you won’t be dispatching large ZEDs efficiently you’ll often be the difference between your allies surviving these encounters through heals and buffs.

With this Field Medic guide you’ll have the foundation necessary to create a Field Medic build that is optimal for various Killing Floor 2 situations. This page includes details of tips, strategy, perks and weapon combinations. From this starting point players can adjust to their own preferences and party needs when playing as the medic perk. Given the diversity of Killing Floor 2 challenges no guide can cover all situations though with difficulty, map and maps having the largest impact on these suggestions.

Playing the Field Medic relies on considerations of your party and Killing Floor 2 game lobby given your role is fundamentally about supporting other classes. The following tips for this class will help you perform at your highest potential: 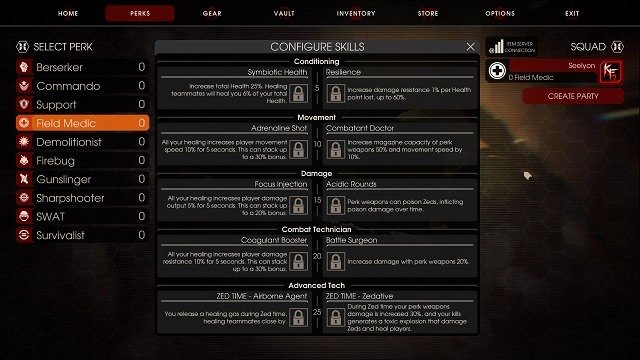 The Field Medic has the following perk bonuses at maximum level:

The Field Medic has the following active perk skills to select from:

Notable active perk skills when playing as the Field Medic are:

Given the above the Field Medic best perks setup is LLLLL as your default option. This left side setup allows you to maximise your healing prowess to support the team and the optimal pathway to playing the Field Medic perk. For players that want to deal additional damage such as when playing solo the right hand size of your perk skills can be leveraged as you see fit although other classes are likely a better choice at that point. The Field Medic role is not one focused on damage but that doesn’t mean you should be ignoring your weapon options entirely with most of your perk weapons having a secondary healing dart (or similar) to turn your weapon into a healing device. Where a weapon has darts they will also target allies automatically that help ensure the usability of those weapons remains high even in the chaotic Killing Floor 2 environment and helps you generate lots of experience over the course of a game match.

The Field Medic weapon choices are also some of the most diverse as they aren’t limited to a single archetype like most other classes. That being said the HMTech-401 Assault Rifle is the core of many weapon loadouts given it’s effectiveness in many situations and strong core weapon statistics that allow it to be paired with basically any other Field Medic option for a viable loadout. The HMTech-201 SMG is also incredibly cheap for what it offers that it can be a good early buy while you build up to more powerful weapons. The following end game weapon loadouts utilise the Killing Floor 2 best medic weapons for the effectiveness they offer: