With our Killing Floor 2 Firebug guide you’ll wield the power of flame effectively to get the most out of this class with the appropriate perks and weapons to create the best build possible. Serving as a chaotic class perk the Firebug utilises flamethrower weapons, a range of incendiary ammo weapons and some unique hard hitting options that can dramatically alter your ZED priority when playing as this class. As a result the Firebug is designed to be a master of clearing waves rapidly but is capable of dealing with a larger ZED with the right selections in your KF2 build.

To help achieve your goals the Firebug is equipped with familiar perks for their specific weapons with damage, reload speed and starting ammo that provide the solid base you need to be effective. Further to this the Firebug gains immunity to their own fire and high resistance to ZED fire damage that gives you a no fear attitude as you dive into the centre of a literal firefight to perform your role and help the team. Unique to the Firebug class is a fire panic mechanic which triggers on ZEDs when they are placed on fire which combined with your ability to spread fire and general area of effect on your weapons makes you a capable crowd control class in Killing Floor 2.

This guide to play as the Firebug provides players a foundational array of tips, perks and weapon loadouts to navigate the multiple potential playstyles of the best Firebug weapons KF2 has to offer. Choosing the right moment to use these weapon loadouts and making smaller tweaks to this Firebug introduction will be based heavily on your Killing Floor 2 cross platform (Steam and Epic Games) teammates, the current map, difficulty and some personal preferences. With this in mind the Firebug builds presented here are intended as a starting point for players to adjust based on these factors. For players still trying out classes to find their favourite we have a tier list for classes in Killing Floor 2 article that details individual class perk strength for solo and co-op play.

To maximise your potential when playing as the Firebug you will want to utilise the following tips and strategies which range from beginner to advanced tactics: 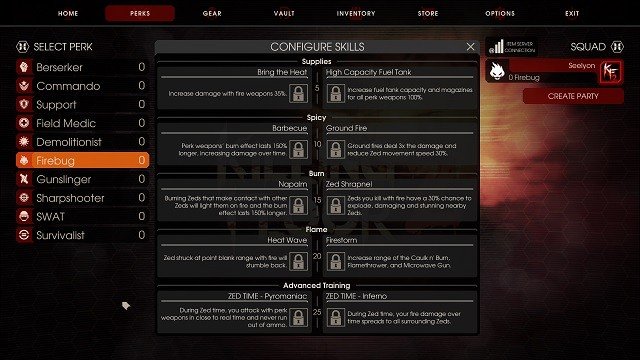 The Firebug has the following perk bonuses at maximum level:

The Firebug has the following active perk skills to select from:

Notable active perk skills when playing as the Firebug are:

Given the above the Firebug best perks setup is LRRLL as your default option. Players can tweak this slightly to a LRLLL variant if you would rather the fire spreading Napalm effects over explosive stuns. If you are leaning towards ranged weapon options over the flame based choices of the Firebug perk weapons players can instead use a LLLLL or LLRLL perk setup given these setups will lack ground fire generation. 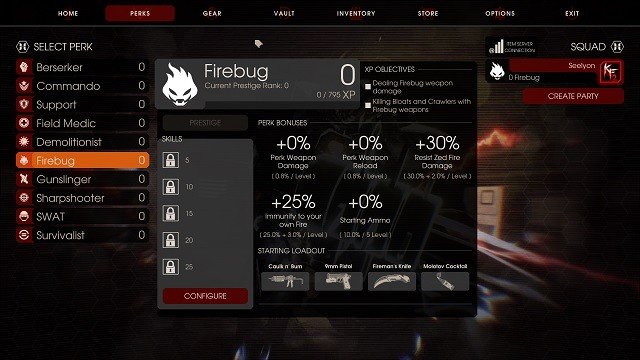 The Firebug has some distinct paths with weapon options that push players towards either the flame based weapons or the ranged weapons that still have incendiary elements and both allow the Firebug to fill their role of trash ZED clearance specialist. These pathways are closely linked to the flame weapons, Microwave Gun and Husk Cannon that each have their own strengths that can alter your ZED target priorities. Note that generally flame based weapons do not need upgrades as the benefits are minimal with your dosh saved for upgrades on your ranged weapons instead. The Firebug is a highly flexible class in terms of weapons with the following being the Killing Floor 2 Firebug best weapons for final loadout combinations to aim for: