This Killing Floor 2 Gunslinger build guide serves as a reference point for how to craft the ideal combination of perks and weapons to create the best build possible for this class perk. Whether you want to play alone, with your friends or the random game lobbies of Killing Floor 2 you’ll have a Gunslinger that is up for the challenges across difficulty settings. The Gunslinger is a class that uses traditional gun mechanics and falls somewhere between the Commando and Sharpshooter which results in a class that is capable of outputting reasonable damage while also having plenty of movement and ammunition to perform this intended role. Enabling this style of play is your single and dual pistol weapon choices that are effective at damage when paired with headshots.

Swapping between single or dual pistols allows players to tweak their focus towards either accurate headshots or wild dual wielding to unleash a hail of bullets towards the Killing Floor 2 ZED Specimens. This weapon type is focused on shorter range engagements with the Gunslinger having the appropriate tools to move quickly around the battlefield and get right into the face of their target to maximise effectiveness. Combined with the focus on headshots for damage and experience gain the Gunslinger playstyle is one of fast paced action with periods of focus to land your shots before moving onto the next ZED battle.

This guide to playing as the Gunslinger in KF2 will set you up for success and serves as an initial point of reference for how to build your class when using this perk. It includes tips, strategies, perk skills and weapon loadout that all combine into a build pathway. As Killing Floor 2 has a range of maps, difficulties and party dynamics your own needs or preferences may differ slightly from that within this guide so players should consider adjusting as they see fit. If you’re still trying to find the best Killing Floor 2 class for your playstyle or goals visit our perk tier list guide for a summary and rating of each perk.

To play the Gunslinger at a high level players should use the following strategy and tips: 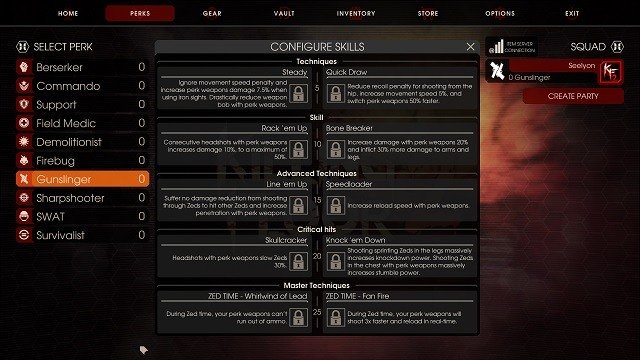 The Gunslinger has the following perk bonuses at maximum level:

The Gunslinger has the following active perk skills to select from:

Notable active perk skills when playing as the Gunslinger are:

Given the above the Gunslinger best perks setup is RLRLR as your default option. For the Gunslinger there are only a small number of niche (often temporary) reasons to change this setup which are noted above. As the Gunslinger your weapon choices are pistol focused with single and dual wield options that are all fairly strong compared to other classes that have only a few standout options. For this reason players can generally mix and match their desired loadout from the Killing Floor 2 best gunslinger weapons which include the single and dual .500 Magnum Revolvers, .50 Desert Eagles, M1911 Pistols, AF2011-A1s, HMTech-101 Pistol and SPX 464 Centerfire. While pistols deal high headshot damage and allow the Gunslinger to be a nimble class this weapon archetype does suffer from low ammo capacity that results in constant reloading. This does result in a balancing act as you progress through your build while keeping in mind your ammunition needs with your end game weapon loadouts being one of the following: