Our Killing Floor 2 Sharpshooter guide details the best Sharpshooter perk and weapons loadout choices to create the ultimate long ranged rifle specialist that is capable of taking down even the largest ZED enemies in the game. While this class perk was not available in the first release the Killing Floor 2 Sharpshooter release date was still during the Early Access period for the game and was part of the Bullseye update (14 June 2016). The Sharpshooter has changed in a number of ways since that time although the core concept of supporting the team from a great distance has remained untouched in that time.

Utilising primarily rifles the Sharpshooter can also use the hard hitting Rail Gun, crossbows and pistols to dispatch ZEDs for the team and also stop them in their tracks through utility. This gives the Sharpshooter class perk a clear role to play in terms of managing large ZED threats and damage output which is focused around using headshot mechanics. Your perks support this with the Sharpshooter having a narrow set of passive perk bonuses that include headshot damage, recoil reduction and weapon switch that allow you to land consecutive headshots and swap weapons for the task at hand. The trade off for this overwhelming power is a lack of survivability, ammunition capacity and overall effectiveness at close range which means you need a solid team behind you when playing as this class. The two main pathways when playing as the Sharpshooter involve leaning heavily into hard hitting guns and stun power for bringing down terrifying ZED threats or leaning towards a generalist build that sacrifices some of this power for greater enemy flexibility.

With this Sharpshooter build guide players will have the necessary starting point to create their own preferred loadout catered to personal KF2 preferences. This page includes details of general Sharpshooter tips, strategy, perks and weapon loadout combinations that are favoured by the community meta as they are optimal in the vast majority of situations. While these choices are superior most of the time Killing Floor 2 has a variety of challenges and factors that knowledgeable players should always consider as some alternative niche options might be effective in the right circumstances.

Playing the Sharpshooter your role is primarily to deal with the larger and deadly ZED enemies for your Killing Floor 2 multiplayer team although the spectrum of this role can change dramatically based on your weapon and associated perk choices. When fulfilling this role players should keep the following in mind: 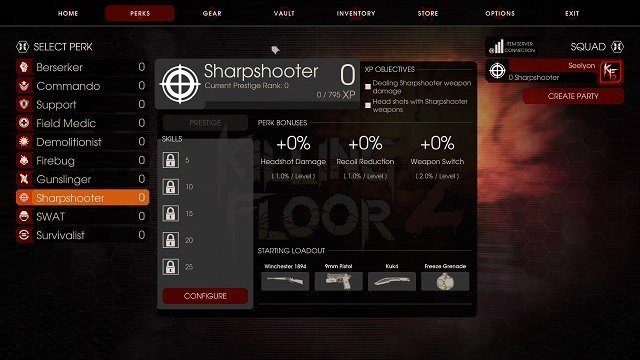 The Sharpshooter has the following perk bonuses at maximum level:

The Sharpshooter has the following active perk skills to select from:

Given the above the Sharpshooter best perks setup is LLLLL as your default option for large ZED killing and RLLLR for a generalist build. As noted above though these can change dramatically with each wave and situation so these should only be considered as a starting point when playing the Sharpshooter class perk. 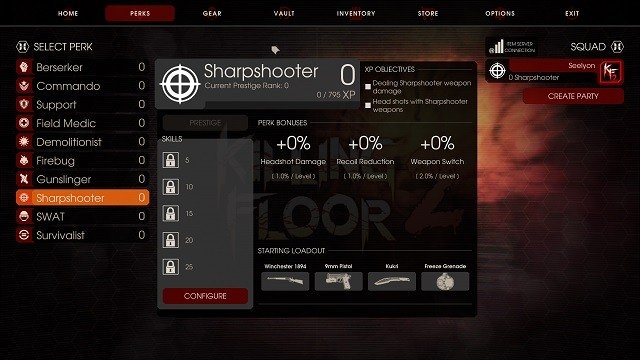 As noted in the introduction the Sharpshooter can split into two distinct pathways that each have their own choices of Sharpshooter best weapons and in turn perks to buff those styles. On one side players can lean into the deadly heavy weapons of the Sharpshooter to cause massive destruction against the toughest ZEDs and on the other side create a flexible fighter that trades some of this power for the ability to handle all ZEDs reasonably well and be less reliant on teammates to clear lower tier ZEDs. As a result the following end game loadouts for your weapons as the Sharpshooter should be your priority for their optimal setup: