This Killing Floor 2 Support guide provides players with the foundation of perks and weapon loadouts to create the best build possible for your preferred playstyle, difficulty and multiplayer preferences. Serving as a supplementary role to any Killing Floor 2 party the Support class perk helps their teammates by being able to hold choke points through their enhanced welding proficiency, ability to pass ammunition to allies and array of penetrating short ranged weapons. This power comes from your weapon class that is predominately shotguns which have smaller magazine sizes and longer reload times compared to other KF2 classes.

This is the trade off of your shotguns though and provided you carefully plan each shot you’ll still be an effective contribution to Killing Floor 2 multiplayer game lobbies against the medium and large tier ZEDs that are your focus. That’s not to say you can’t be ammo efficient against lower tier ZEDs though if you can utilise a chokepoint and your high penetration weapons to hit multiple enemies from a single shot though. Depending on the map this can also be easy to setup for yourself given you can weld doors to create longer chokepoints for your enemies and repair doors which means your team always has defensive blockades available.

Within this guide to the Support we cover the necessary tips, strategies, perks and best support weapons to mix together and provide a starting point for your Killing Floor 2 matches that will be effective in the bulk of situations. As you gain experience in game and as the Support perk you can start to introduce your own variations in response to the abundance of difficulties, maps and party members that you’ll encounter over time. If you are still selecting your main class perk our Killing Floor 2 perk guide covers them all in detail across solo and multiplayer situations.

To utilise the Commando at maximum effectiveness players will want to consider these strategy tips based on the situation. 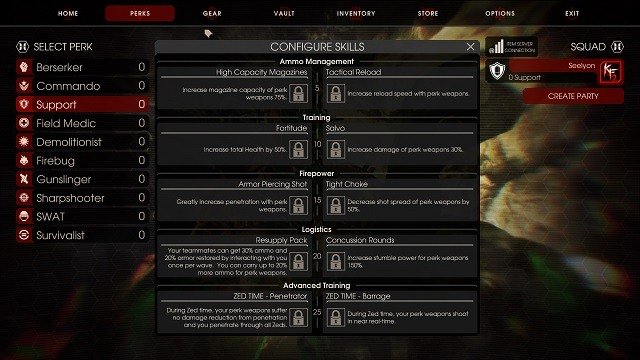 The Support has the following perk bonuses at maximum level:

The Support has the following active perk skills to select from:

Notable active perk skills when playing as the Support are:

Given the above the Support best perks setup is RRRLR as your default option. This is an effective option for early waves as it allows your team to save on Dosh and reach their intended loadout sooner. Depending on party composition, map and game length you can switch to a RRRRR perk option which restores some of your own stopping power when providing ammunition to teammates is less impactful. As a starting point you should consider this around wave 3 on short games, wave 4 on medium games and wave 6 on long games. 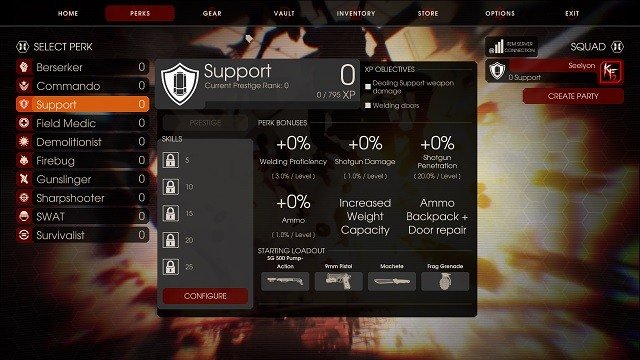 The Killing Floor 2 Support loadouts below seek to maximise your damage and utility to a team and make use of the bonus additional weight that the Support has available through their passive perks. Built mostly around the shotgun archetype that is known for the ability to hit hard against all ZEDs the Support is also capable of selecting a number of off perk weapons that are effective additions to shotguns either to provide additional range or further utility. As a result the Killing Floor 2 best Support weapons come from a diverse roster of potential loadouts that shift your focus across the range of ZED Specimens you encounter which means players should regularly consider any team weakness they need to fill. Most of your builds as the Support class will utilise the AA-12 Auto Shotgun or Doomstick and can generally be mixed and matched in the below builds based on your preferences.