This Killing Floor 2 SWAT guide provides the necessary knowledge for players to create their best build for this low tier ZED specialist that is a useful addition to any team to manage the large enemy waves in KF2. The SWAT is a popular option for those that like to spam traditional weapons with this class focused on the submachine gun weapon variant and not afraid to get up close to ZEDs in a fight. While your individual bullet damage power is low compared to all other class perk choices the firing speed of your weapons and the ammo capacity is basically unmatched.

The SWAT has all the necessary perk tools to support this playstyle with the class able to acquire improved damage, bullet resistance, enhanced magazine size and weapon switching speed passively with level up that pairs nicely with your active perk skills. These customisable perk skills provide durability, speed, damage, reload boosts and improvements to your ammo economy depending on your needs. With all of this diversity the SWAT perk is also a reasonable solo fighter given the lower health pools of large ZEDs when playing alone still allows your weapons to be moderately effective. In multiplayer games though you’ll quickly find even the Killing Floor 2 SWAT best weapons outclassed against larger ZEDs as this is not intended to be your core SWAT role.

This KF2 SWAT guide details the basics of building an optimal SWAT character for solo and Killing Floor 2 multiplayer gameplay with tips, strategy, perks and weapon loadouts discussed in detail. Given the class is relatively flexible players can tweak this foundational build guide to their preferences, map, number and composition of teammates. As Killing Floor 2 has many factors players should always consider their own circumstances and team needs to maximise your effectiveness and chance of victory. If you’re still unsure what the best class perk for your playstyle is then visit our Killing Floor 2 tier list article before reading further.

To play the SWAT class perk at the highest level you will want to keep these beginner and intermediate tips in mind: 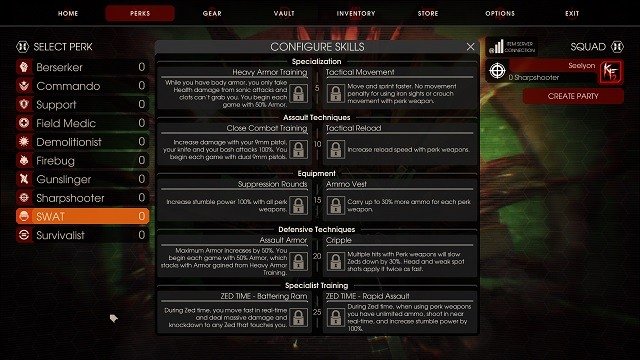 The SWAT has the following perk bonuses at maximum level:

The SWAT has the following active perk skills to select from:

Notable active perk skills when playing as the SWAT are:

Given the above the SWAT best perks setup is LLLLR for the first wave and then RRLRR as your default option for other ZED waves. This maximises your starting loadout for the SWAT to give you additional durability through armour and an extra 9mm pistol that is effective in early waves and then can be sold later for some dosh to invest in your loadout. 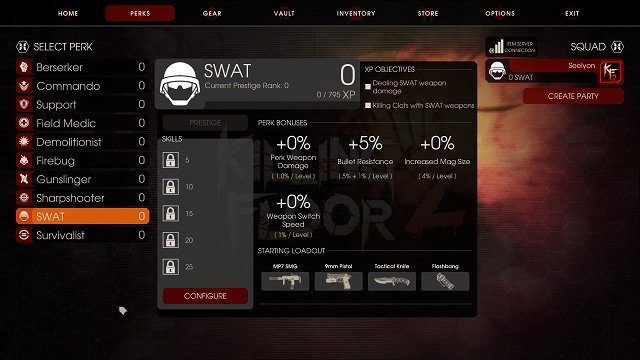 The SWAT uses sub machine gun weapons which are known for rapid fire attacks albeit low damage and significant bullet spread that can make them hard to aim during hip fire. To support this playstyle you’ll find this weapon variant in Killing Floor 2 to have reasonable magazine sizes so that players can fire for relatively long periods of time before needing to reload. When players want to perform targeted attacks on enemy ZED heads you can switch to alternative semi auto fire modes on these weapons for greater control. Your final weapon loadout builds will utilise the Killing Floor 2 best SWAT weapons below: