MapleStory Best Titles & Where To Get Them

With many titles in MapleStory you might be wondering what are the best titles and how you can obtain them from the Maple World. Titles provide a reasonable amount of stats although cannot be flamed or have potential added so are far from the most powerful item slot in your character arsenal. Despite this grabbing one of the top tier titles when possible means you can effectively finalise this equipment slot and move all your focus to other areas for your character.

Titles are also a way to show off your achievements as other players can see them along with different visual effects that give some players preferences for certain aesthetics. This best titles guide though is focused solely on raw stats that will help your character progress through the various tiers of bosses.

For other tips in building your class strength refer to our guides on pocket items, inner ability, link skills, medals, titles, totems and legion which have a larger impact on your character damage than titles.

When it comes to the best titles there are no difference between Reboot and normal (Non-Reboot) server players as titles are equally available across both (although some might be harder for Reboot players to reach the damage required to obtain them). The titles below are presented in order of their stat strength noting that some are limited to certain events and may not be available to players until the events are offered again but are permanent to your character once obtained. 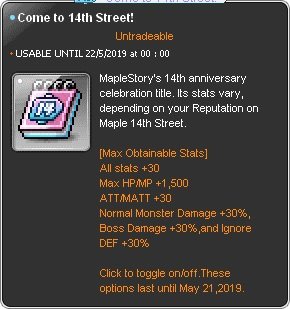 Temporary event titles are not included in this list as they often only last during a specific event period before expiring but are an option for a short period of time if available. For example you can see the 14th Anniversary celebration title on MapleSEA (April 2019 release) has some insane maximum stats and not using this for the limited time it was available would seriously impact your damage output. 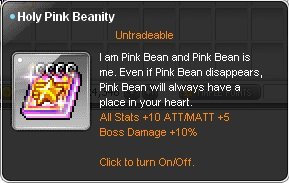 A favourite of the community with its healthy 10% boss damage that it offers this is an event only title rewarded from the Pink Bean Event. This event challenges players to take control of Pink Bean and complete a range of diary challenges to obtain the title along with various other worthwhile bonuses.

If you have the opportunity to obtain this then definitely do not miss the opportunity given it has been the best in slot (bis) title for many years. If you haven’t been lucky enough to be playing MapleStory during a Pink Bean Event though it is not the end of the world as you’re only losing a small amount of stats compared to the permanent non-event titles that you’ll find below. 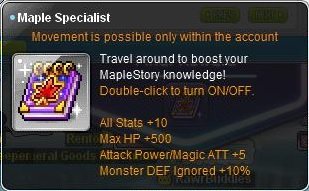 Another event title although one that is far less likely to return to MapleStory compared to the Pink Bean Event above. 10% IED provides another source of this powerful stat for mid and late game bossing that in some instances can actually make it more powerful than the Holy Pink Beanity depending on your other gear and class.

The time investment to earn this event title was significant though and given its unlikely to return this is one title for the MapleStory history books for most of the player base. 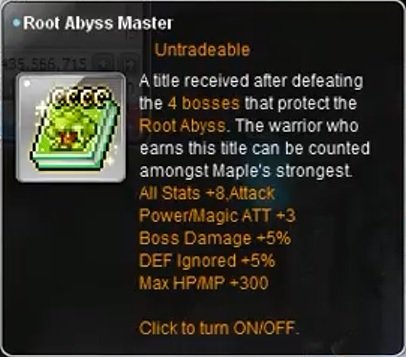 The best title for most players in the end game is going to be the Root Abyss Master although it is not a title you can quickly earn and highly unlikely to be the first title that you use. This is due to the title being a reward for defeating all of the Chaos Root Abyss bosses 10 times each which will take a minimum of 10 weeks when not using any applicable boss reset tokens available.

In addition to the 10 week requirement reaching the point of defeating CRA solo is a significant milestone in itself for many MapleStory players (particularly on Reboot servers). Earning this title can of course be made easier through a reliable guild or friends to help you reach the 10 kills if desired but likely difficult to arrange 10 kills in practice for most players.

For those that do obtain it though the boss damage and IED are valuable end game bossing stats that will increase your overall boss damage despite the slightly lower raw stats then the Monad titles below. 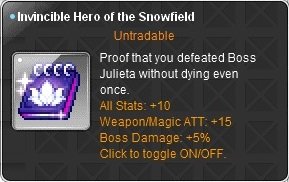 Prior to obtaining the Root Abyss title the Monad titles are going to be the best titles in MapleStory for players to use. In this category there are in fact 7 different titles that all have the same stats and are unlocked by performing various tasks in the Monad quest line.

These tasks do require players to finish the entire blockbuster content (several hours) as the specific quest board that provides the titles for various achievements is only unlocked at the end. With some all stat, a healthy amount of attack and some extra boss damage it’s generally worth the time investment on your main MapleStory character and you are likely to gain several levels completing it anyway.

The titles are as follows with details of how to unlock each on the MapleStory Monad wiki: 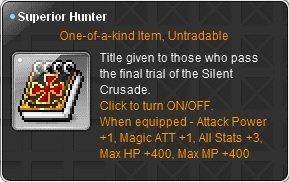 An entirely optional title for those that want to fill up their title slot prior to completing Monad given its a level 110 requirement to start. The quest line that provides this title (Silent Crusade) provides a number of other benefits so it will likely be on your questing list anyway. This includes a wealth of free potions, crusader coins and other items that provide a progression path for your main and mule characters although hardly game breaking.