Unlock the best totems in MapleStory for Reboot and Non-Reboot (normal) server players with this totem guide to ensure you are maximising damage and utility in this equipment slot. Totems have a large range of options available for players with the decision of which 3 totems to equip made only more difficult through a range of event items with limited availability. If you’re wondering how to get totems this means there are a number of methods with some easier (and cheaper) than others.

This guide to the best totems in MapleStory aims to detail all the top options, how you can obtain them for yourself and point out why in some situations you should actually pass on higher stats and use more accessible totems instead to save your Mesos and time investment. Designed for both Reboot and Regular server players differences between these two servers are noted where relevant. Pairing this strong totems guide with the best pocket slot item, medals and titles is a great way to effectively lock up these equipment slots early on in your account progression allowing you to focus your attention on other equipment slots as these are all slots with limited options.

With players able to equip up to 3 totems at a time you can mix and match the recommendations below based on your totem availability. While stats and skills provided by totems are a key consideration in determining the best option it’s also important to consider your Meso budget, time investment required and event limitations when choosing which ones to obtain and equip.

Note that this list below does not include consideration of the Wild Totem given this is a 2hr time limited cash shop item used for the purposes of unlocking the Wild Totem skill. If you have the option to use one of these it should always be active while training given the dramatic impact this skill has on monster respawn rates. 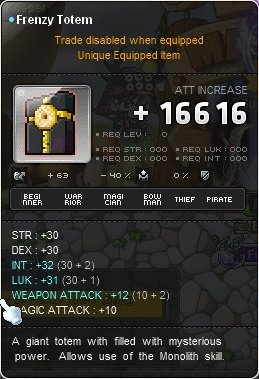 The holy grail of totems and the best non-reboot totem available in the game that gives a healthy amount of stats and the overpowered Monolith skill. Just like its little cousin the Wild Totem this skill places a large monolith on the map that improves monster spawn rate. However, when using the Frenzy Totem it lasts for 10 minutes regardless of whether or not that person stays on the map that leads many to buying frenzy service on Non-Reboot servers for tens of millions of Mesos.

If you’re wondering how to get frenzy totem in Maplestory, this item is one of the rarest items in the entire game available only from Marvel Machine and Philosopher’s Book events and accordingly trades for thousands in real world dollars. 99% of the MapleStory player base will never own this totem but it is clearly the best totem available to Non-Reboot players. 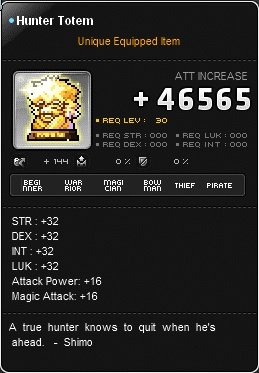 For normal server players the hunter totem variants provide a possible upgrade path through the auction house with the best in slot being the Hunter Totem and two of your classes applicable dark totem (detailed below). In non-reboot you can expect these to run into the billions of Mesos though so it isn’t a priority upgrade by any means and one saved for late game progression.

If you don’t want to spend the significant Mesos or are on the Reboot server your only option is to wait for the event to come around although it has not been offered for a number of years (since 2016) and many in the MapleStory community (myself included) doubt it will ever return given the length of time that has passed.

The Hunter Event Totems options (worst to best totem) are: Similar to the Hunter Event totems above these can be acquired on normal servers through the auction house for several billions in Mesos due to their rarity with 4 variants each assigned a specific stat (Doom for STR, Avenger for DEX, Hellia for LUK and Grin for INT). There are also dark versions that have the highest stats with gold, silver and copper variations that slowly reduce the stats.

Acquiring these without spending the Meso or for Reboot players relies on the event (Dark Lords of Darkness) being available and then an element of luck in the totems you acquire through the event. This event has historically been a Halloween regular although has not been run by Nexon in the last few years (since 2019) which has some worried it may never return.

The Dark Lords of Darkness Totems options (worst to best totem) are:

The best totems in Reboot outside of event options above with players that equip the Horseback Riding Doll Totem, Jade Kettle Totem and Bronze Incense Burner Totem also earning a set effect for their efforts. Note that the Bronze Incense Burner has slightly higher stats than the other totems in this set but is also considered the hardest of the 3 to acquire leaving many players skipping it entirely.

In order to obtain these players must have some introductory quests from The Far East (Yu Garden) completed and obtain a specific monster drop that corresponds to each totem. These can also be layered with the popular Yu Garden dailies in Reboot for time efficiency as you’ll often find these totems while doing daily quests. The major drawback of the Yu Garden (or Shanghai) though is that they only last for 30 days before you need to farm the respective items again. With this in mind I generally opt to simply run the Afterlands Totems (shown below) as these are the strongest non-event permanent totems available in MapleStory and have decent enough stats that you can focus your attention and time into other more powerful equipment slots. This totems are also ideal for your link skill and legion mules as the quest provides ample experience (around 10 levels) and gives them a decent bump in damage. While the weakest totem stat wise on this list I consider these to be the best totem for the majority of the MapleStory player base. This is because they aren’t limited to events, don’t cost a significant amount of Mesos and don’t require renewing every 30 days. While you give up some stats the convenience of doing a single MapleStory questline that takes an hour to complete and then waiting for a better totem event to occur lets you focus on other equipment slots that provide better value for your time and Meso.

There are 4 totems available in the Afterlands Souvenir Set that are themed after characters from the Afterlands quest line (Beodog, Billy, Adler and Mansa Figurine) that each specialise in one of the main class stats. Following an Afterlands guide is the best option to finishing this quest quickly and with practice can be completed on alternative MapleStory characters or mules in around 50 minutes for a good chunk of experience and the totems themselves.