Optimising your MapleStory hyper stats by utilising a calculator can be an important step to maximising your potential damage for your MapleStory character. While the perfect setup can change constantly as you grow your legion, link skills and change your equipment slots there are some general principles you can apply. With these principles you can limit the hyper stat resets you’ll need to utilise as each costs Mesos and avoid using a MapleStory hyper stat calculator if preferred.

In this MapleStory hyper stats guide we’ll cover an overview of the system mechanics, the best hyper stats to invest in, a general approach to hyper stats allocation and how to use hyper stat calculators the community has created for those who want to absolutely min-max their character power. I recommend pairing this hyper stats guide below with the applicable hyper stats wiki page. 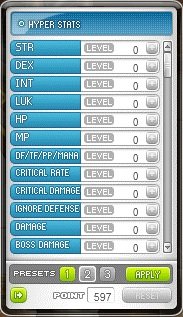 The hyper stat system in MapleStory gives players another method to boost their character power and functions as follows:

The following hyper stats are available to all players in the hyper stat window. The best hyper stats are noted below in the hyper stat tier list column and ranges from S to A, B, C and D with a separate rating for training and bossing. This is a general guide only of how powerful each stat is and will vary depending on your class (e.g. Kanna or Night Lord) and progression in other MapleStory game elements. It is applicable for both Reboot and normal servers as the differences between these servers are not material enough to impact hyper stat point allocation. Further detailed information on decision points for your hyper stats is included after the table below. 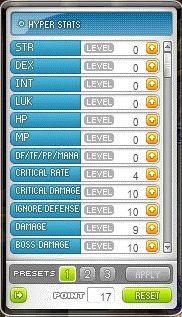 Each of these ratings is described in more detail below:

With the above best hyper stats you might be wondering how to invest your hyper stat points for maximum efficiency. Given every MapleStory account will be different given class, equipment, link skills and legion the only way to be certain in your hyper stat investment is to use a MapleStory hyper stat calculator (SuckHard or DelusionDash are my recommended options). These calculators do take some serious time investment to use though and only deliver an optimised hyper stat result at that point of time which will quickly require recalculation if you change anything related to your character. This makes MapleStory end game a good time to use these calculators as you are unlikely to make significant changes to your character. Dedicated MapleStory players can use these calculators earlier though if they don’t mind the required time investment to set them up.

For those that want a simpler approach to maximising hyper stat benefits you can apply the below steps based on the tier list ratings above (either training or bossing as appropriate). It is recommended you have a preset for both training and bossing to switch between when appropriate. With this approach below you’ll likely gain the majority of the benefits from your hyper stat without having to constantly use a calculator. This order is based on the diminishing returns of hyper stat point spending that occurs at level 5 and 10.