This MapleStory Legion guide breaks down this important progression system with the effects, grid bonuses, ranks, coins and raid mechanic covered. Also known as Maple Union on some servers this system was first introduced in early January 2017 to KMS replacing the character card system that was previously in place. For many wanting to fight the mid to late game bosses that MapleStory offers like Chaos Root Abyss (CRA), Lotus and Damien reaching high Legion ranks (6k or above) is a critical step due to the powerful stats of IED, Boss Damage and Critical Damage on offer.

Similar to the old character card system the intent of Legion is also to encourage players to play other characters by rewarding them with passive benefits to all of their other characters. The Legion system also has a coin based system that players can spend on key important account boosting items with both passive and active methods for earning these Legion coins.

In this MapleStory Legion guide you’ll learn the basic overview, how the grid works, Legion character pieces and ranks, the best Legion effects and how to earn Legion coins.

Legion is a diverse MapleStory system with many mechanics that can make it confusing on first introduction. The basics of the system are included below with further detail available in the respective guide sections of this page. 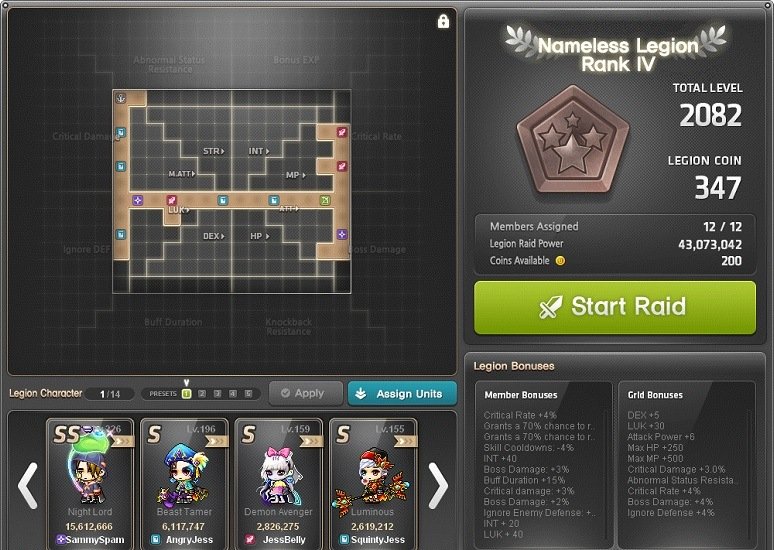 The Legion grid is the heart of the Legion system and the inner grid is unlocked as soon as you reach the minimum requirements to unlock the system. the outer grid first unlocks at 2k total Legion levels and is only fully available once players reach the elusive 6k Legion and pay the necessary Legion coins to upgrade their rank to Heroic Legion 2.

Unlocking the Legion grid is just the first step though and in order to actually obtain any stat benefit players need to place character pieces onto the grid. The more grid squares covered by character pieces the higher stats you’ll receive passively for your MapleStory characters.

The inner grid has 25 squares per stat as follows:

Each outer grid area has 40 squares per stat and is as follows: 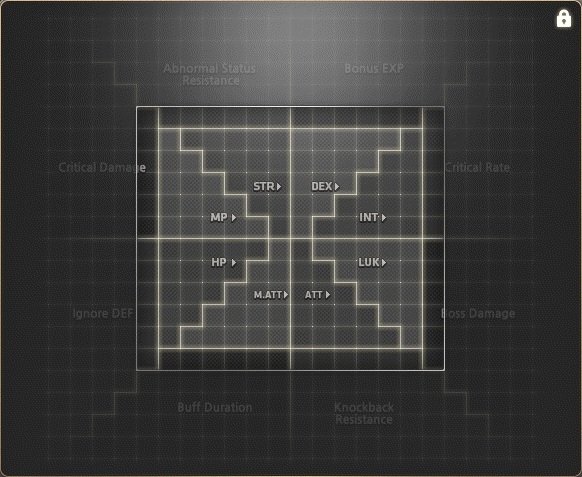 Players can not just simply place pieces in the outer squares though as you are only allowed to place your first piece in the middle 4 squares and all your pieces from this point must be connected together either horizontally or vertically. Accordingly, the most common setup for grid bonuses to setup the bottom 4 inner grids left to right to be Attack or Magic Attack (depending on your class), your secondary stat, HP and then your main stat. This ensures that the bulk of your grid effects are set to your required attack type and main stat as you build horizontally towards the outer grid. Archers are a favourite in the Legion for this as their long horizontal pieces can be used to achieve the setup noted above.

Once reaching the outer grid the majority of character builds will be focusing on Ignore Defence, Boss Damage, Critical Damage and Critical Rate. Players can also setup a Legion preset for bonus experience and critical to activate while training.

Determining these setups can be a daunting task but there is a community developed Legion Solver to assist with this and worth using as your Legion grows over time to ensure you have as little unnecessary overhanging pieces into non wanted stats as possible.

The Legion character pieces size and shape available to you varies based on the archetype of each class and their level. Each character level corresponds with a Legion rank that applies to Legion pieces and passive Legion character effects as follows:

Each piece is the following shape at the various ranks and character archetype: 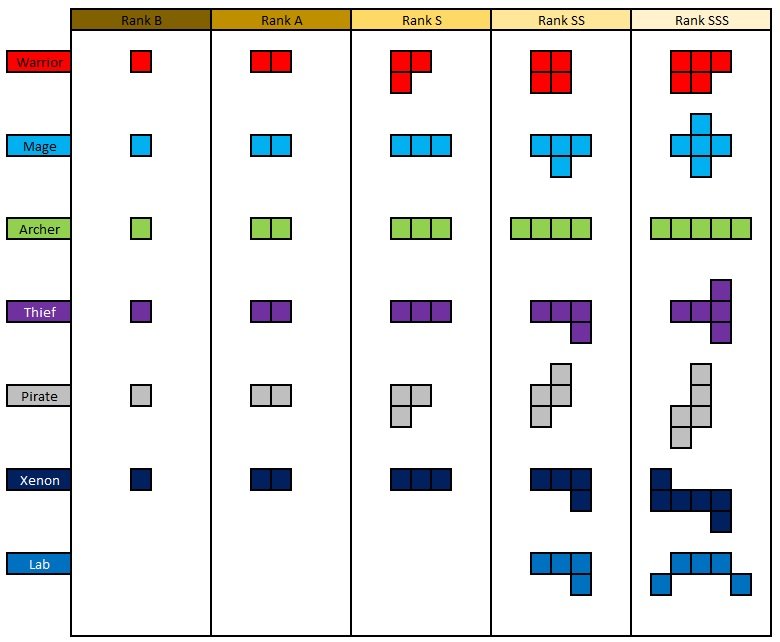 The Lab Server Legion block comes from a 2018 MapleStory event and has not been repeated since, it is unlikely to return which leaves many without access to the powerful legion effect it provides.

In addition to the grid stats from placing each piece on the Legion grid your characters offer their own member Legion effects based on their specific class and the same Rank B to SSS. The best Legion effects that players will want to prioritise are listed below with many of these also having some of the best Link Skills that make them even more valuable. While reaching Rank SSS can be a significant investment reaching Rank S (level 140) ties in nicely to obtaining Link Skills (level 120) and can easily be done through daily Zakum bossing with minimal effort slowly overtime.

Zero: A great early addition to your MapleStory Legion with a boost to experience gained that can assist in future Legion and general account progression.

Mechanic: Offering the rare buff duration statistic this can be a quality of life improvement while also boosting your training speeds and boss safety by requiring less rebuffing of your character.

Hayato/Shade/Jett: All 3 of these offer deadly Critical Damage and should be prioritised accordingly for both boss fighting and regular training.

Demon Avenger/Kanna: Both already popular classes for their damage boost through Link Skills their attractiveness continues with their Legion Boss Damage boost and thus worth having in your grid for boss orientated players.

Phantom: Ideal for Reboot players due to the boost in Meso that this offers and can significantly add up over 100s of hours of Meso farming.

A full list of Legion effects is available on the MapleStory wiki.

How To Earn Legion Coins:

While your best purchase needs will depend on your current progression and goals purchasing the Legion Expertise (experience gain) is a fantastic boost to your training efficiency. Luck and Wealth are also viable ways to maximise your Arcane River drops or boost Reboot Meso rates.