Learn how to unlock the pocket slot in MapleStory and what the best pocket item for this equipment slot is to maximise your damage output. This guide covers everything you need to know about this unique equipment slot for both Reboot and Non-Reboot (normal) server players.

While simple in terms of the pool of available items that can be equipped the pocket slot itself is more complex as it requires a series of tasks to be completed along with a minimum trait (Charm) requirement to unlock the pocket slot itself. The pocket slot does not influence your attack range as much as other items but is still worth unlocking and an important piece to your overall account progression particularly for mid to end game bossing and any bossing alternative characters that you are attempting to gear up. If you want other ways to gear up your character you can also refer to our medals, titles, totems, inner ability, link skills and legion guides.

How To Unlock Pocket Slot

Once these are met players will have the equipment slot opened to be able to place a pocket item. Tips on how to complete this pocket slot quest and detailed steps to achieve both of these requirements are included below. 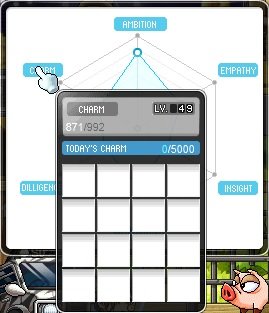 How To Get Charm Level 30

In order to unlock the pocket slot quest you’ll first need to reach 30 charm level on that character and while it may seem difficult at first. However, it’s actually quite easy once you understand how to raise charm with the following methods: 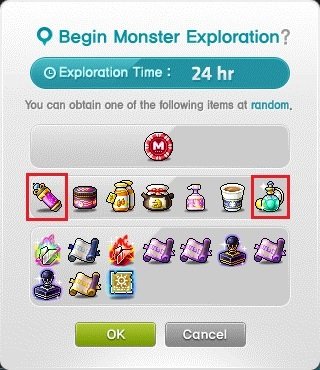 While the charm guide above remains useful after level 30 going beyond this point only rewards cosmetic facial expressions and is rarely done by the MapleStory player base.

Only after you have reached the 30 charm requirement above is the pocket slot quest made available. As of the MapleStory Ignition update (November 2022) this quest is automatically completed when it is unlocked and rewards players with the pocket slot instantly as a result. 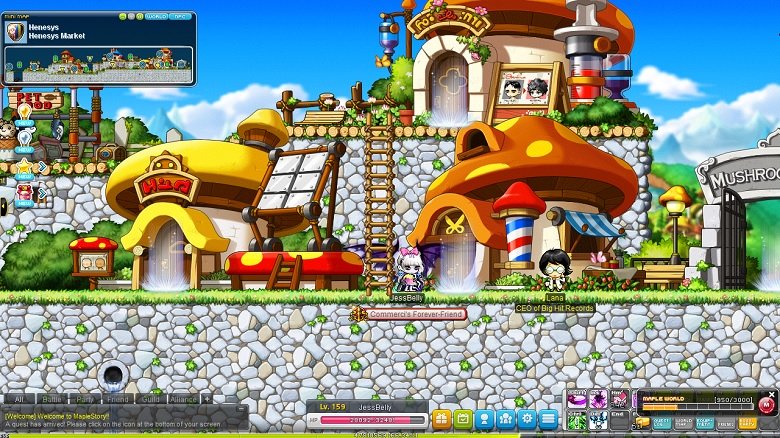 With the low number of potential items that can go in the pocket slot it’s an easy equipment decision for the most part with the vast majority of the community using the same item. Even though this is the case there are still some important optimisations to be made because of the flame potential this slot offers.

Note that the below excludes currently unobtainable pocket slot items as there have been many event only items over the years of MapleStory that are not expected to return. This includes the Rifle Bullet that offered a massive 28 to all stats and 14 weapon/magic attack. 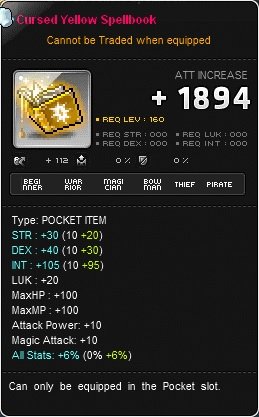 While these spellbooks offer the highest base stats of any pocket item this is truly a top 1% of the MapleStory population item and outside the reach of even most dedicated players. Dropped only from Hard Will these four colours each have a stat speciality with red for STR, blue for INT, green for DEX and yellow for LUK and belong to the Pitched Boss set.

With Hard Will being one of the most difficult bosses currently in MapleStory acquiring this item is exceedingly difficult. In addition the length of time it will take to roll good stats via flaming a spellbook that rivals that of the second best pocket item featured below means its simply not viable despite having the best base statistics most of the time. 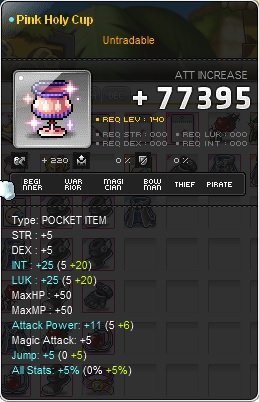 The best pocket item for the vast majority of players is the Pink Holy Cup and is generally considered the best in slot option due to its availability which means high potential for great flames. In order to obtain this item you’ll want to fight Pink Bean (Normal or Chaos) which can both drop this item for Reboot and Non-Reboot players with Chaos Pink Bean having significantly better odds.

Non-Reboot players have a distinct advantage here as the auction house has a wealth of affordable Pink Holy Cups to choose from. When shopping you want to focus on high main stat and all stat % which an auction house filter can help you track down and worth doing even if you can defeat Pink Bean to save you time and investment in getting strong flames yourself. Note that the item is untradeable after being equipped so you cannot recoup any investment so aim for one decent cup straight away rather than making small multiple upgrades here.

For Reboot players making these bosses part of your daily and weekly MapleStory tasks is an absolute must and any duplicates can be fused together to reroll the flames. For Non-Reboot players you can expect a weaker pocket slot given you rely solely on your own drops. 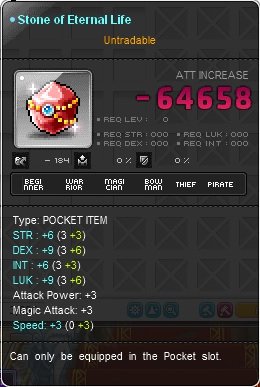 A viable best pocket item in MapleStory until you can acquire a Pink Holy Cup for both Reboot and Non-Reboot players but not one to overly invest time or Mesos flaming. In my experience I’ve found this item easier to acquire given you can kill Normal Hilla well before Pink Bean as she has about 25% of the health pool. For this reason there is likely going to be a period of time where you have the pocket slot available without a better option so there is no harm in equipping a Stone of Eternal Life in the interim until you acquire your Pink Holy Bean Cup.