If you are a new or returning player to MapleStory wondering what to select in the reboot vs normal server debate our guide to server selection will break down the details, pros and cons of each option. With server selection being a permanent choice in your MapleStory adventure it is not a decision that should be made lightly and can often paralyse players as they ask themselves what server should I join?

With this MapleStory server guide you’ll have all the necessary information to make your decision and some key questions to ask yourself about your preferred playstyle before committing to either one. Regardless of your ultimate choice you’ll still be able to experience the vast majority of content that MapleStory has to offer on both reboot and regular servers.

Like many online games like MapleStory the game world is split across a number of game servers with some of these utilising Reboot mechanics while others are referred to as normal or regular servers which use the mechanics that the MMO has slowly shifted towards and its development focused on.

Important things to keep in mind when selecting a server in MapleStory (regardless of reboot vs normal considerations):

Reboot Server – What is Reboot?

Launched in late 2015 in the North American GMS server Reboot was an attempt by Nexon to give players are a traditional MapleStory experience given the game had moved away from some of it’s tough RPG and free to play roots of decades past. Reboot EU was introduced approximately 3 years later and remains significantly less populated than its NA cousin.

The primary appeal to the Reboot server is that it removes the reliance on NX premium currency in progression and instead empowers players to earn powerful items with Mesos dropped from monsters that they farm. Given Mesos are such an important part of your progression a MapleStory pet purchased with NX (or acquired in game through limited free methods) is vital. Carries from friends and guild members are also often central to progression for most players which allows you to obtain powerful boss equips before you could feasibly solo the content yourself (although some still opt to play solo only for a harder challenge).

The main differences in Reboot Servers are: 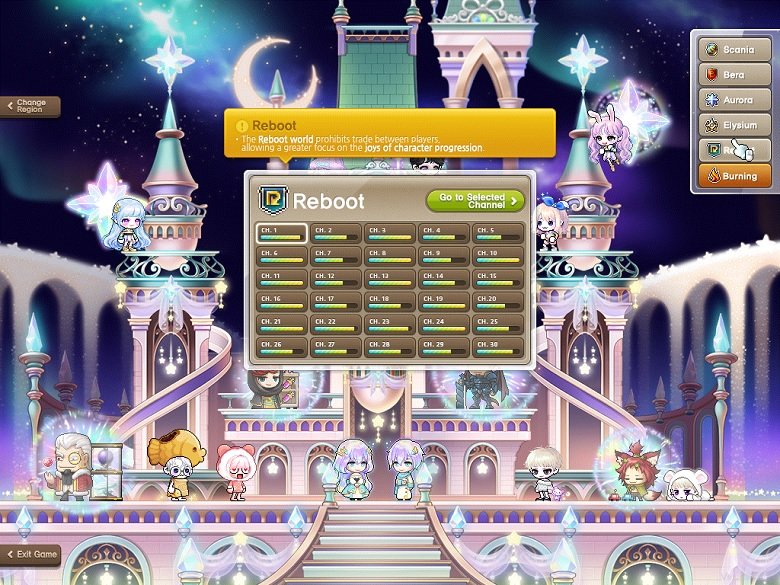 Normal (or regular) servers offer a different MapleStory experience that is similar to traditional free to play MMOs with trading and the economy central to your gameplay. Players that want to spend money to skip content to save time also have that option through premium NX currency.

Normal servers will appeal to those that enjoy playing the market through merchanting and want to access gear that is already made for them rather than making it themselves. Players on the normal servers also have the option to spend money on NX convenience or power boosting items although it is still possible to succeed without purchases and something I’ve done myself on Scania as an entirely free to play player.

The main features of normal servers and differences to Reboot server are: 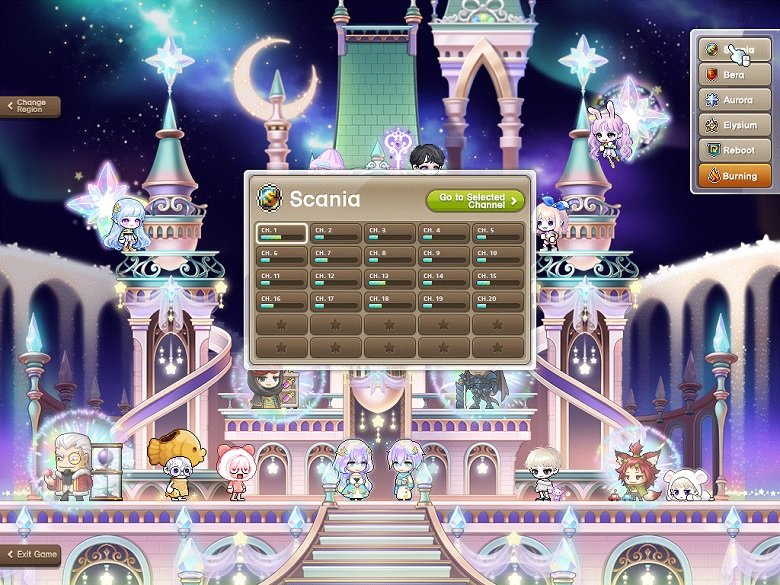 While on the surface many in the community make the Reboot vs Normal server debate a free to play or paid one the considerations on which server to play go significantly deeper.

Reboot is good for players that:

Normal Servers is good for players that:

Ultimately there is no right or wrong decision and it comes down to what you enjoy doing in MapleStory and what you see yourself doing long term. I’ve played both Reboot and normal servers during my time playing MapleStory since and have settled on playing Normal servers as a free to play player. This works for me as I enjoy using the auction house to hunt for deals, make Mesos and purchase equipment upgrades for my characters. My end plan for my MapleStory account is also to stop well before the end game bosses so I don’t expect to hit any of the pay to win negatives of later progression.