In our Nuclear Throne best crown guide we explore each of the available crowns in the game, the impact they have on gameplay and most importantly the situations when each will be a strong choice for your adventure. This secret game mechanic gives advanced players an opportunity to alter their game experience and with the right selection improve your chances of continuing your adventure further then ever before. Given players are only able to equip one crown at a time your choice holds even more importance than your other game choices that you make with each character level up or your character selection itself.

In this guide we detail the basics of the crown system in Nuclear Throne along with recommendations of pre-loop and post-loop crown options based on your character or playstyle preferences. Given crowns are intended to be a secret game mechanic there are spoilers ahead for core Nuclear Throne mechanics that you may want to wait to discover yourself before reading on.

Crowns in Nuclear Throne are secret modifiers that can dramatically impact your game experience far beyond what the best Nuclear Throne mutations do and stay with players for that run and have a visual impact on your character. Crowns can only be accessed through the Crown Vault which can be accessed through the special prop spawn during your adventure known as the Proto Statue. Visually these statues are presented as a diamond shaped structure and require players to deal damage to them before charging them

These will initially only spawn from Scrapyard 3-2 onwards with a spawn that repeats every other game area within the second stage as a result the spawn cycle is Scrapyard 3-2, Frozen City 5-2 for a first playthrough. After players loop spawns for Desert 1-2 and Palace 7-2 are added. In order to activate the Proto Statue players will are required to deal damage to the structure at which point it will start to collect Rads from enemies around the immediate area to reach full charge before opening up a green portal to the Crown Vault.

The first time players visit the Crown Vault you’ll find the single Crown Pedestal where you can select a crown before leaving back to your Nuclear Throne run (players can also choose not to take a crown if they wish). Subsequent visits to the Crown Vault players will encounter Crown Guardians who are moderately difficult foes along with a Proto Chest (if entering with a crown) which allows for item transfers between games. Leaving a Crown Vault also increases the game difficulty resulting in improved weapon spawn chance and more enemies. Players are capped at a total of 3 Crown Vault visits per game run and the Proto Statues will cease to spawn after this point.

Players can only wear one crown at a time, they do not stack by selecting the same crown more than once and are split into two distinct crown pools which includes 6 pre-loop and 6 post-loop options for players to choose from. When you do have a crown equipped players can expect to spawn cursed weapon chests 14% of the time and have encounters with the I.D.P.D on exiting the crown vault or on 1-1 if a crown is equipped. Players can in time start with a crown if they sit on The Throne or loop the game with a crown equipped which makes it available to start with for that character only. 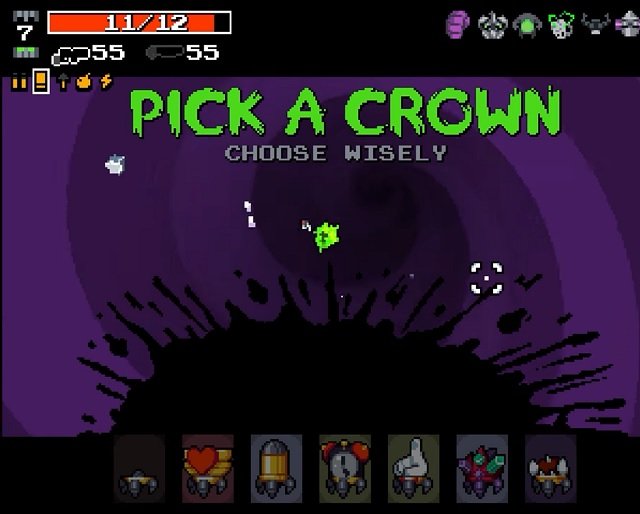 The crowns below are listed in alphabetical order split between pre-loop and post-loop crown options. As with other decisions in Nuclear Throne the choice of crown is highly dependent on character, playstyle preferences and also if you are starting with the crown or picking it up during a run. As such the below is intended to serve as general guide to the best crown in Nuclear throne and I suggest that dedicated players should experiment with each of them as intended by the developer given they are there to primarily spice up gameplay in unique ways.

Each crown is rated on a simple scale of S > A > B below based on the how much the crown helps you extend your playthrough length although even the low rated crowns can be fun and worth trying.

Sam appreciates the rougelike genre for it’s various challenges and randomisation that ensure you always have something new to experience with each game attempt. Nuclear Throne is one of his favourites in the genre with his favourite characters being Crystal and Robot that he regularly equips with energy weapons.