What is the best class Portal Knights has to offer and what are their individual class strengths and weaknesses? In this class tier list guide we will cover the best solo and coop class so you can confidently select your Portal Knight character. With 3 core class options and an additional 2 added through downloadable content players have an abundance of choice in Portal Knights with each having their own skills, attribute specialisation and equipment that can dramatically impact how effective they are in different game content and the playstyle they adopt.

Whether you’re looking to complete the game alone, with friends or defeat the hardmode boss this Portal Knights class tier list will detail the pros and cons of each available class. Be it the Warrior, Mage, Ranger, Rogue or Druid you’re considering to play each has their own summary below. While all of these classes are capable of finishing Portal Knights some simply excel at how fast and easily they can tackle the game content. The term best is often a subjective term in video games and Portal Knights is no exception, when determining which class is best for this class guide the following factors have been considered. Given the design of the core Portal Knights story adventure, boss fighting and extra content along the way you’ll need a class that has the following attributes:

For Portal Knights this results in the following class tier list for both solo and cooperative play:

Each of these is explored below in order to detail what their strengths and weaknesses are and how you can build these Portal Knights classes to maximise their potential. With Portal Knights requiring dozens upon dozens of game hours to complete the core content I still encourage players to choose a class that they will enjoy for the adventure over one that is highly rated but does not interest them. Without a doubt the Warrior is the best class Portal Knights has to offer simply because they offer both great damage and durability that makes them hard to compete with. While the melee focus of the warrior class does put you in harms way by utilising shouts, equipment and your available skills warriors are capable of shrugging off or significantly reducing most damage. Combined with the fact that Constitution is one of your main attributes which provides HP a warrior will quickly become the walking tank you would expect them to be with the right warrior build.

Warriors are fantastic for solo, coop and even hardmode bosses with the only real weakness being the melee focused playstyle that makes you slightly slower to move across content and kill flying enemies.

Added in Feb 2020 in the Druids, Furfolk, and Relic Defense downloadable content pack for Portal Knights the Druid offers one of the most unique playstyles of all the Portal Knights classes with a melee and shapeshifting focus that lets you turn into some familiar enemies through craft, monster drops or directly purchased shapeshifts. While the druid has a similar playstyle to the warrior with melee attacks they heavily rely on shapeshifting forms and aren’t quite as durable but have additional damage to compensate.

This does mean the druid require a higher level of focus to play effectively and you’ll need to obtain the necessary shapeshifts first to reach your potential. If this doesn’t bother you and you find the playstyle interesting then you’ll once again be able to conquer solo, coop and hardmode with this Portal Knights best class option. 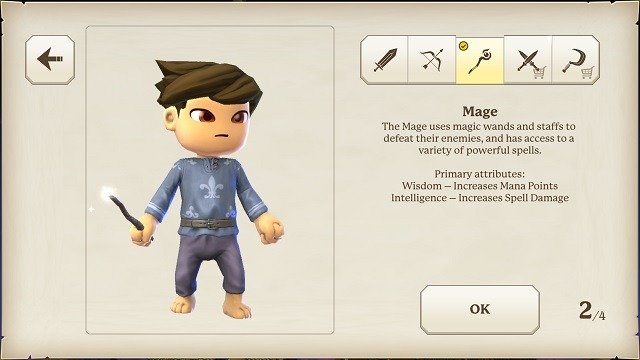 The best of all ranged characters in Portal Knights due to the high damage output the mage can deliver and the high mana pool that supports more spellcasting than other characters. The mage class also has a range of weapons with elemental effects that along with spells that make them particularly effective at optimising elements for damage against enemy weaknesses. The mage class has some obvious weaknesses though that means they never quite reach the heights of the warrior or druid but are still more than capable of solo, coop and hardmode content with some effort and an optimised mage build.

For the mage class your biggest difficulties will be survival requiring regular dodging and may require you to invest some points in constitution for additional health particularly if you intend to do hardmode bosses. Although some of this can be covered with the correct equipment choice at the cost of some damage or utility instead. Mages are also going to have heavy reliance on mana and health potions that requires some micromanagement and resource farming that other classes won’t face to the same extent. The second ranged class that Portal Knights offers and equips a bow that is paired with speed and bombs for a balanced class that can do most things well. Like the mage the ranger can generally not take significant hits from enemies but does pack a serious damage punch with ranged weapons that make them designed to be the glass cannon class of Portal Knights. What lets the ranger down though is that they never achieve that glass cannon fantasy often doing less damage than the above listed classes (warrior, druid and mage) even with a carefully crafted ranger build.

The ranger is still a capable fighter though with ranged attacks making them great for both solo and coop playstyles and eventually able to reach high dodge chances that give them extra survivability to counteract their low health pools.

The first downloadable content class for Portal Knights with a 2019 release with the Elves, Rogues, and Rifts paid content. Focused on a stealth playstyle the rogue is a class that uses melee weapons but pairs it with stealth to avoid damage from enemies. While good in theory the rogue is a similar experience to the ranger in that they never reach their full potential mostly due to poor design choices that just require too many variables to be effective. With a low damage weapon archetype on top of talents that require you to be behind enemies or in range of only a single enemy the game design of the Rogue doesn’t work within the other Portal Knight mechanics.

While still capable of fighting your standard mobs without too much difficulty the boss mechanics simply don’t allow the rogue to fully utilise their stealth and damage abilities that means I can only recommend the rogue for a coop playthrough where you have some friends playing other Portal Knights classes to cover your obvious weaknesses.