Our Portal Knights ranger build will equip you with everything you need to have a viable ranger capable of soloing the core story and tackle the hard bosses that offer a post game challenge. Covering ranger attributes, talents, skills and equipment choices you’ll have a solid foundation to build from in designing the Portal Knights best ranger build for your playstyle. The ranger is a master of multi shot and critical builds with both being viable pathways for your ranger depending on your preferences and playstyle. While multi shot can output more damage overall a critical build can still deal reasonable damage and brings added utility through critical triggered utility on equipment.

The ranger is one of the two ranged classes offered in Portal Knights and specialises in bows, crossbows and slings and pairs that with an agile playstyle that focuses on dodging attacks rather than directly absorbing blows. This ranger build guide focuses on maximising your damage output while taking some useful utility and safety skills as needed to keep you in the fight and is designed to be able to defeat all Portal Knights game content. If you like the idea of a ranged attacker but the mage class doesn’t appeal to you due to its reliance on magic over physical attacks the ranger is the perfect option.

The two primary attributes for the Ranger are dexterity and agility. For players progressing through the game content alone or with friends they should maximise their dexterity stat with every point spent in this damage boosting attribute to maximise your ranged attack damage.

For hard bosses if players find they are getting one hit and would rather the safety of being able to survive an attack (will depend on gear) players can consider placing 10-20 points in constitution which should be sufficient to survive at least one attack from all bosses and gives you some safety when facing these high difficulty enemies. 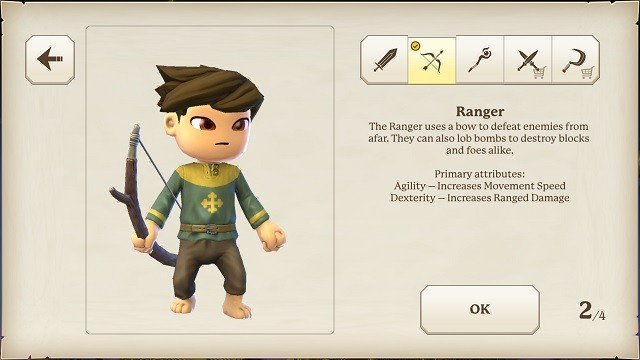 A good default talent build for ranger players that is useful for game progression and a general balanced talent allocation is as follows:

Note that the ideal talent placement will depend somewhat on your playstyle and broader build choices which are further detailed below:

Level 2 talents are the most straightforward of your build choices with players selecting the talent that aligns with your weapon of choice which is usually bow or crossbow.

The ranger has the most limited skill options of the base game Portal Knight classes while they do have a reasonable mana pool the damage of skills often doesn’t beat out a direct attack. That being said here are the following skills and consumables you can consider using:

Given most of the best equipment in Portal Knights needs to be farmed from chests or enemies acquiring the best in slot ranger build pieces is likely to be a significant journey. Thus the below includes the important stats to be looking to maximise on your ranger build so that you can consider what you currently have available to provide those stats.

As a ranger your equipment should focus on the following: 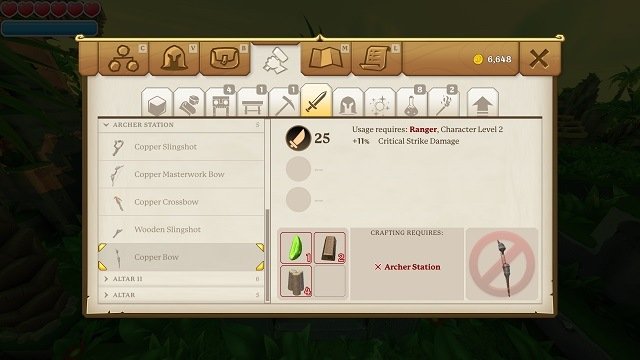 Some potential items in each equipment slot for your ranger build are as follows: