Which Streets of Rogue character class is the best to achieve victory? Should you make your own custom character instead? With the challenging randomisation journey that Streets of Rogue takes players on choosing the best starting class can significantly reduce the game difficulty and improve your odds of becoming mayor or achieving one of the other game endings or a big quest (BQ).

While all characters can complete the challenges the game throws at you each has their own ideal playstyle that maximises their starting attributes, ability, traits and starting items. This in turn impacts on your early, mid and late game success with characters having their own difficulty curve that can fluctuate as you move through the different levels. This best character guide for Streets of Rogue will breakdown what makes some classes so successful, the best options to choose from or unlock and inspire you on the best way to build your own custom characters. 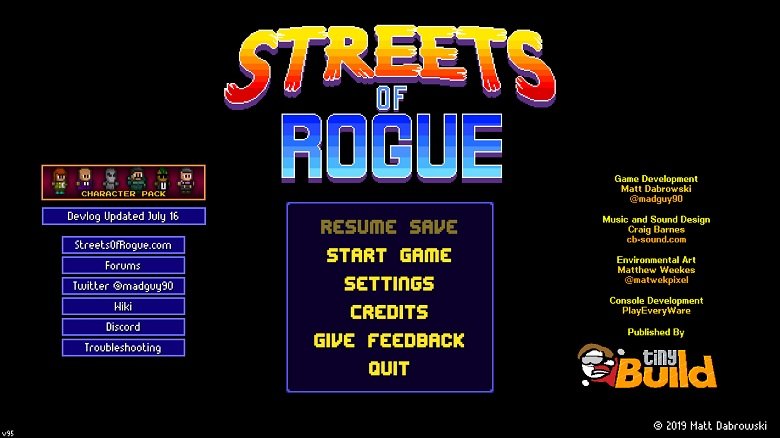 Streets of Rogue supports many playstyles from the aggressive fighter to a sneaky hacker and even pacifist playthroughs and is one of the mechanics that make the game so enjoyable and varied. With that in mind though there are some playstyles and character mechanics that make your life easier that can help us define what best means in a Streets of Rogue tier list context and is applied in this guide. 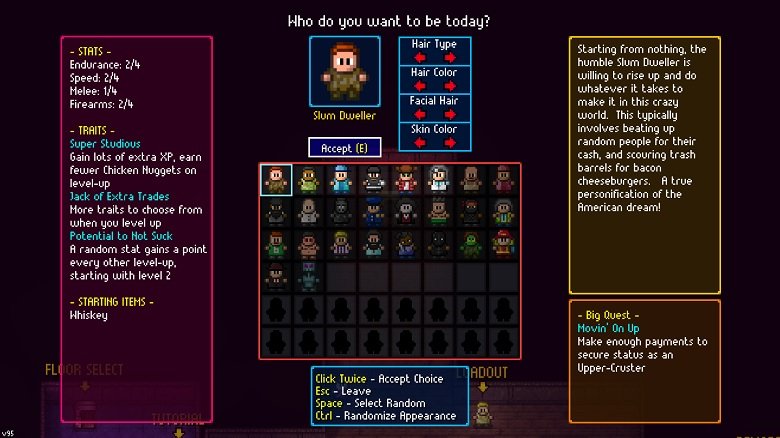 The following is a list of the best characters with details of what makes them strong and how to use them effectively. This tier list is not presented in any particular order although characters you have unlocked at the start of the game are listed at the top. It does not include all Streets of Rogue characters and assumes some basic level of game knowledge (e.g. what each starting attribute offers).

A character which players start with unlocked in Streets of Rogue and likely your best chance at your first victory. The soldier has a powerful starting position with specialties in weapons (melee and firearms) supported with reasonable endurance and speed. This is further supported with a solid starting loadout and the extremely useful modern warfarer trait that gives you some passive healing.

Playing as the soldier means an aggressive playstyle where you kill your way through any problems that you encounter during a typical Streets of Rogue run. Investing further in firearms and healing items as you progress through the areas will serve you well until the end game face off.

Another character that plays have unlocked from day one the doctor is surprisingly one of the best stealth characters and also a capable friendly option. Stealth gameplay is enabled through the chloroform hankie ability that can put any NPC to sleep if they are unaware which combined with a tranquilizer gun gives close and ranged stealth options. Both of these mechanics are easy to use and highly effective in most situations that give you a viable stealth playthrough without much effort. As the doctor though you’ll be unable to take an aggressive path in most situations due to the pacifist negative trait that prevents weapon use.

The doctors strategy means heavy usage of your sleeping tools and avoiding any need to use aggression as this will quickly ruin a run although careful usage is important as tranquilizers can cost a bit. Acquiring an item like the taser is often a key purchase to give you a third viable option or alternatively trying to accumulate large amounts of money to invest in allies and supporting them with your medical professional healing trait.

Continuing the trend of originally unlocked characters the hacker needs a little more effort than others but with patience and a good understanding of game mechanics can be a strong choice. While he lacks endurance or melee attributes he makes up for it with high speed to run away from enemies and a decent firearm skill if you get caught in a pinch. Being able to remotely hack nearly anything with the combination of your laptop ability and tech expert trait is the reason you play as the hacker and why he can be so much fun.

These fun mechanics also drive your core objectives when playing as the hacker with scouting out the map and your potential hackable items vital to developing and then actioning a hacking plan. If your hacking attempts fail using your speed to quickly leave the area before returning later is your best option. Your starting inventory is also fairly average so looking to acquire items such as a backup firearm can be worth your focus early on.

The final starting character on this best character list the slum dweller is often overlooked and while he does have a tougher start than most listed here his flexibility and end game potential still make him a top tier selection. Abusing your large gains to experience, additional trait choices on level up and your passive attribute gains as you progress those comfortable with the early levels can quickly be in control of a deadly character.

Playing as a slum dweller means you are highly creative early on in mission completion and do whatever it takes to get those first few levels and reliable weapon. Order of missions is even more important here as you’ll want to work your way up the more challenging ones. Beyond this you’ll want to adapt to the traits and attributes that you acquire along the way and not lock yourself into a particular playstyle straight away.

The cop is a regular sight in your Streets of Rogues runs and can be yours to control after bribing three of them. The cop is definitely considered one of the best class options due to his high flexibility and strong starting position. Playing as a cop gives you balanced starting stats with a slight lean towards firearms while the starting items give you both a melee and firearm option for a consistent early game quest approach. In terms of abilities you’ll get handcuffs to disable enemies and a useful law trait that ensures all NPC cops are your allies although you can lose experience for doing crimes.

A cop strategy relies on playing as a law abiding citizen and abuse the fact that cops will come to your assistance due to their ally status. Handcuffs are also fantastic as experience generation as you can earn level bonuses and higher base experience by using them as your core strategy.

While requiring players to kill a ghost that can be a difficult task due to the setup required the werewolf is worth the effort given it’s an almost easy mode aggression win guaranteed. The low starting attributes (all level 1) and negative traits might turn you off but once in werewolf form it’s a completely different experience as you can tear through multiple enemies with ease.

Central to your victory is acquiring werewolf form boosting traits that increase the length of time you can be in this form and reduce the negative side effects after the fight. The werewolf is one of the few characters in Streets of Rogue that walking into a room and killing everyone is a viable strategy although you need to carefully time the activation of the ability.

Watch the video below to learn how to kill a ghost in Streets of Rogue and unlock the werewolf class:

A character that can easily be unlocked by beating a single level with silence (no killing or alerting) and is one of the best characters for a stealth playstyle. Speed is your most powerful attribute and allows you to move through the map and away from danger with ease. This speed is also useful when using the backstabber and camouflage which is your main strategy throughout.

Playing as the assassin is both simple and powerful when done properly as you can go completely unseen as you move from target to target with backstabber. With low health though and the mechanics of your abilities isolated targets are your bread and butter while multiple enemies are best avoided.

After you’ve mastered 5 other characters you’ll get access to this unique class that has one of the most interesting playstyles on offer in Streets of Rogue and is also highly effective. While all your attributes except for speed start at 1 your special possess ability is all you need for success. This is because using possess gives you all the traits and items that you need to complete levels provided you can perform the initial sneak behind a target. The negative trait wanted that you spawn with can make this difficult for the fresh player though.

A shapeshifter path to victory and their big quest relies on constantly being in possession of someone and understanding what that character can do for you. For this reason a shapeshifter needs a strong understanding of all the NPC types and how each can be used to complete the mission levels.

After spending a total of $1,500 across your Streets of Rogue games you’ll be able to play as your own shopkeeper who is a deadly firearm wielder with average other attributes. Starting with a solid shotgun you also have various items and traits that boost your money to purchase high end gear and firearms into the late game.

Herein lies your best strategy when using this class, optimise your money making to the max by using your traits and then spend this on food and firearms that make you near unkillable. For players that don’t want to use any of the standard characters noted above you also have the option to design your own custom character in Streets of Rogue. The best custom character can thus be perfectly crated and customised to suit your playstyle and preferences which can then be saved, loaded and even shared with the community through the Workshop.

While you can essentially make an exceedingly powerful custom character with this feature players have limits that they cannot exceed if they want unlocks, achievements and nuggets to not be disabled. These limits impact the amount of points (stats and special ability), traits and items you can utilise.

While the best custom character is going to be one that works for your intended playstyle using the definitions of best at the start of this character guide are a good starting point for success. Most notably ensuring you have a clear strength, good aggressive damage options, solid starting items and flexibility for multiple situations. 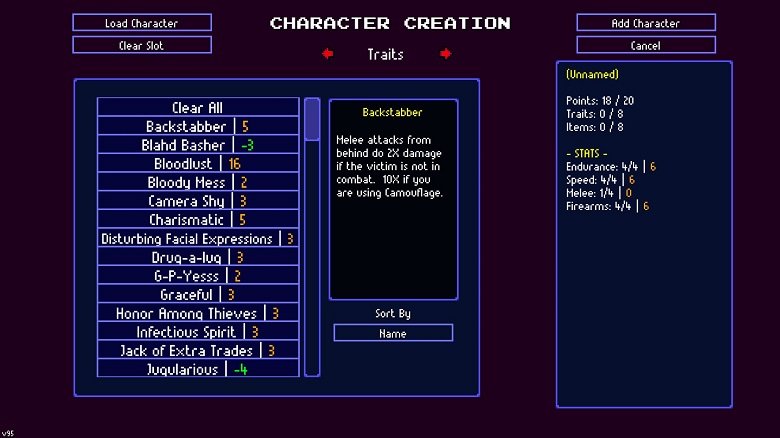 Whether you are designing your own custom character or wanting to know the best traits to select when levelling up in Streets of Rogue this short list of best traits can give you a reference point. Note that many of these require you to unlock them with chicken nuggets earned from your Streets of Rogue runs before they can be added to the available pool of traits.

Sam has played Streets of Rogue since its original release and enjoys the roguelite mechanics and variety that the game offers. He has played and unlocked all the available characters preferring aggressive and money focused characters like the Shopkeeper to claim victory over the mayor and continues to return to the game after major updates.