Offering players in Tarkov the choice to kill Sanitar or not the Colleagues Part 3 or Huntsman Path Sadist quest lines have very different requirements and rewards. Which path should you take to be most optimal and why? We break down the quest requirements, rewards and ultimately support our conclusion of why you want to complete Huntsman Path Sadist (kill Sanitar) and in the process settle to eliminate Sanitar or not debate.

Colleagues Part 3 or Huntsman Path Sadist is the first multi-choice quest introduced in Escape From Tarkov which requires different tasks to be completed by the player. In comparison the other multi-choice quests in Tarkov (Chemical Part 4/Out of Curiosity/Big Customer and Kind of Sabotage/Supply Plans) which have the same task objectives but differed in who you could provide the quest item. Important to note that as of patch 12.9 (2021) neither of these quests are required for the Kappa Secure Container although this is always subject to change. Taking the Huntsman Path does unlock an additional quest though (also not required for Kappa) which needs to be factored in. 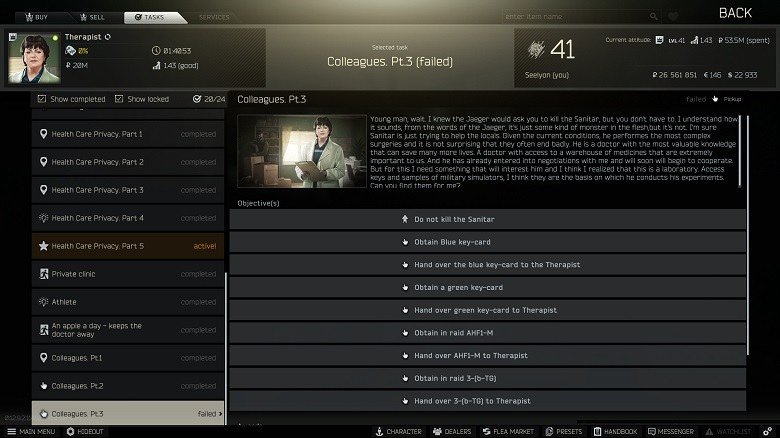 The Tarkov wiki provides the full extensive list of quest requirements and rewards for your efforts with this path generally being the good option from a lore perspective as players do not kill Sanitar and instead let him live to help provide medicine to Therapist. That being said there is still an element of grey morality at play here as Sanitar is not a complete saint in the Tarkov universe either.

In terms of requirements the most significant and difficult items to acquire are the respective Lab keycards, particularly the Lab. Blue keycard that can easily set you back as much as an entire Tarkov wipe worth of income at generally a cost in the tens of millions of Roubles.

While some Tarkov quests offer great rewards that make it worth an initial investment in items to earn rewards the cost does not justify the rewards which are predominately medical items, a med case and a Lab. Violet Keycard although this is worth far less than the required quest items as it has an available hideout craft. The small amount of Therapist reputation is also offset by the loss of Jaeger reputation which is generally harder to acquire due to his difficult PvP orientated challenges. 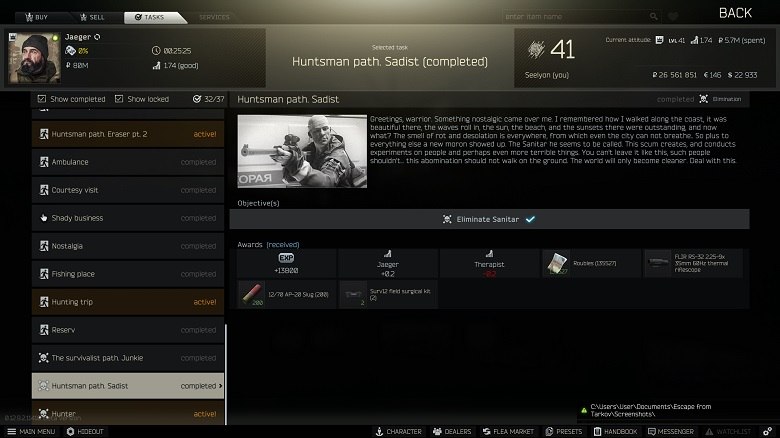 Again I recommend checking the updated Tarkov wiki for the detailed requirements and rewards of the Jaeger option although they are significantly simplified compared to the Therapist path. With Jaeger believing that Sanitar is beyond redemption and he should be dealt with by removing him from Shoreline once and for all your task is to kill Sanitar.

As Sanitar can offer a challenge to players it is recommended to use top tier Tarkov ammo that deals at least 70 flesh damage which will ensure a one hit headshot when fighting Sanitar as he never wears a helmet. Affordable ammo such as M80 and SNB or better meet this damage requirement and also have good penetration power to deal with his heavily armoured guard helmets or body armour. As his boss AI is focused on constantly changing position and healing combined with his total 1,270 health pool he is extremely durable along with his two guards. Players can also practice against Sanitar using offline mode and activating the enable bosses configuration.

For players that can eliminate Sanitar though you’ll be rewarded with a thermal sight (FLIR) that sells for several thousand Roubles and a healthy amount of the deadly AP-20 shotgun ammo that can also be sold or used for the shotgun quests in Tarkov. The reputation boost to Jaeger is also a nice bonus and the loss of Therapist reputation is not significant as she is generally the easiest to acquire reputation with. In addition you’ll unlock a second quest (TerraGroup employee) from Peacekeeper provided you have completed his Samples quest that offers further rewards that include Peacekeeper reputation, Dollars and unlocks two Peacekeeper trader level 4 purchases for the Tan Team Wendy EXFIL Ballistic Helmet (Tan) and Mesa Tactical Crosshair Hydraulic buffer tube.

Why Choose To Kill Sanitar For Jaeger?

From the above you have probably already made the conclusion that choosing to eliminate Sanitar in the Colleagues Part 3 vs Sadist debate due to the significantly lower Rouble investment and boost to Jaegar reputation that is more useful than Therapist reputation.

In addition this is the only option that allows you to unlock the subsequent TerraGroup employee quest from Peacekeeper which itself has various useful rewards that you’ll lock yourself out from if you take the Therapist pathway.