What Is Escape From Tarkov? Tarkov Genres Overview

What is Tarkov? What are the Escape From Tarkov genres you can expect to encounter this online game with a growing player count? If you’ve been wondering what Escape From Tarkov is this general game overview will answer your basic questions and give you insight into the game experience prior to purchasing the game. With Tarkov reporting concurrent player counts over 200k in early 2020 and likely much higher now after a number of successful Twitch streamer events there are a steady influx of gamers considering if Tarkov is right for them.

It is this question that this article intends to answer and while it won’t provide a beginner’s guide to your first few raids you can be confident in deciding if Tarkov is the right game for you or not by answering common pre purchase questions and explaining what do you do in Escape From Tarkov. Our full game review of Escape From Tarkov may also assist with your purchase decision. Once you’ve made the decision to buy we also have a handy guide on choosing the correct Tarkov game edition.

For those that want a “what is Tarkov?” and beginner guide in one video our favourite 2021 option comes from Boomstick Gaming below:

What Kind Of Game Is Escape From Tarkov? (Escape Form Tarkov Genres)

It is hard to define Tarkov, Escape From Tarkov offers a unique mixture of genres that makes it hard to create a direct comparison, in short it is a brutal loot and survival first person shooter with a number of different mechanics, genres and elements:

What Is The Point Of Escape From Tarkov?

After considering all of the Escape From Tarkov mechanics above you might be thinking what exactly is the point or ultimate goal of Tarkov that you’ll be striving for? Currently in its Beta state Tarkov does not clearly define this for the player but there are a number of end game goals that the community generally aims for (presented in order for easiest to hardest):

In addition to the above other players in the community might play to rack up the PvP kills, grow their in game wealth, reach insane player levels or hunt down the game bosses who provide a higher AI challenge.

If you’re wondering how much space does Escape From Tarkov take due to your own file size limits the final install on your computer will be approximately 30GB. Given the high number of game assets that are required to load before and during each raid it is strongly recommended that this is installed on a SSD when possible. 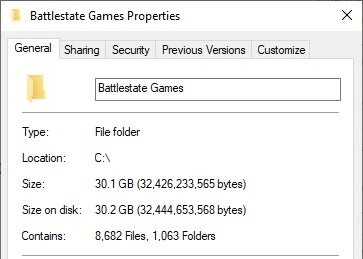 However, there are some other public data points that we can use to infer the potential size of the playerbase currently:

Based on these metrics we can determine that from December 2020 to August 2021:

Based on the above it’s reasonable to conclude that the current Tarkov concurrent player count at peak is around 300 to 400k players.