The trader order to sell items (or trader sell order) in Tarkov is an important piece of game knowledge that can dramatically increase your Roubles earned and reduce your time outside of raid selling your loot as well. If you’ve been wondering who to sell what items and in what order when it comes to your Escape From Tarkov loot we’ll cover the order and types of items each trader accepts in this selling guide below to help optimise your experience. If you’re finding that traders take too long to level these tips will help with one piece of the puzzle by improving your ability to meet the required spend/sell with them. Escape From Tarkov Order To Sell To Traders

The current best order to sell your Tarkov loot to traders is:

This order maximises your Roubles gained in the vast majority of cases and gives you a consistent process for selling your loot from raids. This Tarkov selling order should only be used for items you don’t intend to sell on the flea market either because they don’t have significant value, aren’t found in raid or don’t have access to the flea market yet.

Fence can be included at the end of this priority list as he is only useful for players that want a single point of sale as Fence will purchase everything, although he doesn’t pay a fair sum compared to other traders. He is the only trader that buys certain items though including severely damaged armour and weapons.

The specialities of the above traders (in order) will be covered below which will help the advanced Tarkov player go directly to the ideal trader and saving additional time in the menus. Ragman is number one in the Escape From Tarkov who to sell to order for good reason as he pays a nice premium rate for the various armours, rigs, backpacks and accessory clothing items in Escape From Tarkov. If you find yourself being overwhelmed from your scav runs with random backpacks, low level armours and face/eye accessories you’ll want to sell them directly to Ragman. This makes levelling up Ragman easier compared to other traders especially if you a are a diligent user of your Scav runs where you’ll pick up excess of these items regularly. What to sell to Jaeger? Playing the role of survivalist hunter in the Tarkov universe Jaegar has an interest in shotguns, bolt action rifles, melee weapons, hardware items and medical items (often paying equal to Therapist as you can see from the screenshots). For medical items in particular this means you’ll want to balance sells between Jaegar and Therapist based on the one that you need to boost your buy/sell trader value with.

Historically the Therapist was the go to trader in the order to sell priority as she purchased a large range of items and paid a premium for them from your stash. This has changed in recent times but she still is the best trader for medical, keys, barter, dogtags and food sales which are often the most common items you’ll accumulate quickly. The high value of some keys to traders also means your non found in raid keys can quickly build up your trader reputation with her.

A clear fan of guns based on his Gunsmith quest line Mechanic is a good place to sell any ammo, weapons and attachments that you can’t sell to Jaeger. While his price paid for weapons is second to none in Escape From Tarkov the differences between Mechanic, Prapor and Skier is often only a few thousand Roubles so you’ll want to balance between the three when going for money spent/bought reputation requirements and not raw Rouble value. 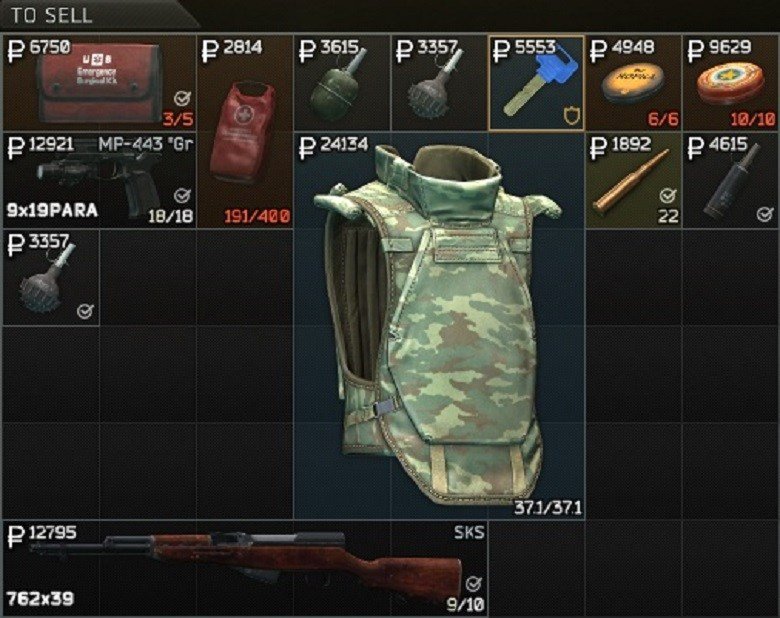 While Prapor does buy a reasonable range of items including medical, ammo, armour, weapons and attachments he is not your highest paying trader for any of these. That being said you may occasionally want to sell items to him that you would usually give to Mechanic or Therapist in order to meet the trader money requirements as Prapor has a number of important weapon and modifications to unlock.

Skier offers little compared to your other traders when it comes to value for money, although he does sell Euros at trader level 2. Similar to Prapor he should never be your first trader to sell to but you’ll want to sell some of your weapons and attachments to him to help the trader level up process as levelling up Skier money spent can be quite difficult and leaves many players wondering what to sell to Skier. Your best option is focusing on the few items that nobody else wants to buy in the attachment category and if needing reputation urgently selling all attachments you acquire to him.

Representing the UN is Peacekeeper who will give you $USD for your sales rather than Roubles and makes him unique compared to other traders in the sell priority list. His unique purchase requirements also leave many players wondering what to sell to Peacekeeper and can hinder your attempts at Peacekeeper levelling.

Peacekeeper will purchase the odd weapon, helmet, ammunition and most importantly intelligence based items like the SSD, diaries and folders of intelligence (although these are better used in the hideout if not found in raid). He is good for any leftovers that you might have but given the best option for levelling Peacekeeper in Escape From Tarkov is through purchasing $USD from him to meet your needs for certain quests he can generally be easily skipped as a regular trader to sell your items. The leftover trader that also offers the most powerful Tarkov quest in the game. Fence is useful to quickly dump items when you are too rich to care about the optimal way to sell items in Tarkov or armour that is too damaged for Ragman (often 50% or less durability) or low durability weapons that no other trader will accept, allowing you to clear valuable space in your PMC stash.