If you love the risk board game and wanted a browser based game like Risk then AtWar has come to the rescue. Allowing you to play against others on a wide range of maps be prepared to put your strategic mind to the test. 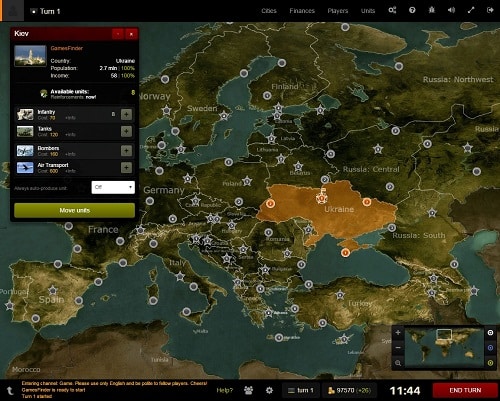 The strengths of the AtWar formula are the accessibility and the control over the settings of each game. This includes things like victory conditions, numbers of players and how long you have to take your turn. With support for as little as a minute all the way up to 48hrs AtWar can please both the hardcore and casual fan bases.

Each game is player created to ensure there is a multitude of variety and this community driven experience expands to the likes of rating systems, forums and various other customised game elements.

Regardless of settings the early game generally plays out the same with players choosing a country of their own ad trying to quickly establish a base of control with your early group of units. Within each country there are a number of cities which if controlled will produce a steady stream of income to be invested in reinforcements which are available every few turns. At the same time your current units will drain your income stream creating the need for balance between cities held and units to keep a steady income.

Capturing said cities is an easy enough task and requires you to move units from city to city (drag and drop), with each unit having a different range of movement careful consideration is needed to ensure maximum efficiency in city captures. When your army clashes with a city it will face off against the units held up there in automated battles based on the statistics of units.

These units are split between ground, naval and air with each helping you to achieve  a different goal thanks to the varying stats of attack, defence, critical, collateral damage, range and capacity (for transport units). 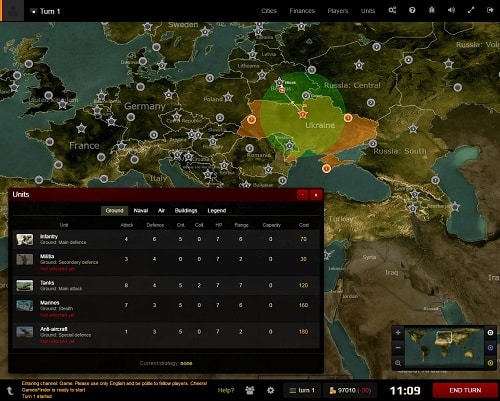 Further game depth comes from strategy upgrades that can alter your unit stats based on your selection (such as the Blitzkrieg which boosts movement at the cost of defence), additionally account wide upgrades for extra units can be unlocked with the game currency of SP which is earned for gameplay.

For those wishing to splash out you’ll find the premium options provide decent benefits while still ensuring fair gameplay by providing things such as a small 10% discount on SP upgrades, additional strategies and a host of additional maps and game types for more variety.

With its high level of variety and plenty of depth once you master the basics AtWar proves to be a great game to test your wits against others.

This review was first published on June 29, 2016. Read our update policy to learn more.

Games Finder is a Steam Curator and featured in the aggregate review scores data of MobyGames and Neoseeker.
FEATURED ON
Games Like Advance Wars, Games Like Civilization, Games Like Master of Orion
LEAVE A REPLY Cancel Reply