Borderlands is a first person shooter packed full of role playing features and is available on all major platforms. One of the core game mechanics is the randomised loot which is often seen in action RPGs such as the Diablo series. 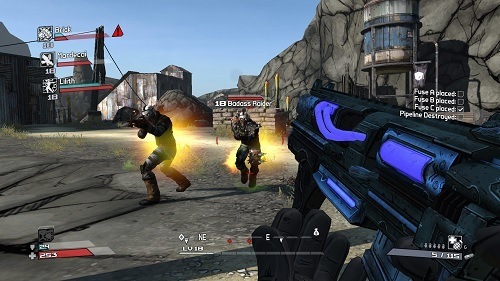 The game is set on planet Pandora where the lure of minerals has attracted one of the mega space corporations and thus a number of settlements have slowly popped up across the planet. The game centres around the search for an alien vault which holds advanced weaponry and technology based on previously found vaults on other planets.

Players join the game after the mega corporation has abandoned its hunt for the vault and take the role of a treasure hunter who is one of many that have decided to try their luck at finding the vault themselves.

This vault hunter can be one of four different characters with each have their own statistics and fighting style. This includes Mordecai who uses sniper rifles and his pet Bloodwing, Roland the soldier who prefers his assault rifles or shotguns and uses his Scorpio Turret when things get tough, Lilith who prefers sub machine guns and weapons with elemental power and finally Brick who loves melee fighting and explosives. This character choice is more than just skill related though with each character having their own very distinct personality.

As you advance in Borderlands your character will level up increasing their stats and giving you a skill point to spend on their skill tree (each character has three different trees to explore). New equipment will also be available to the player which can be dropped from enemies or bought from vendors. Each of these weapons is procedurally generated so no two guns are the same. 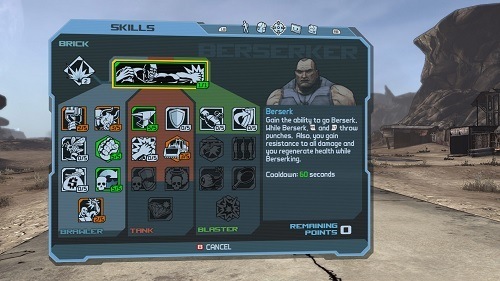 Gameplay is heavily focused around quests across a number of maps which slowly open up to the player. The game world is similar to that of an open world experience although some of the main missions take place on linear dungeon like maps.

The gameplay is solid, the character customisation deep, the drops random and the world has its own unique personality. You really can’t ask for much more in a role playing shooter.