Cards and Castles links together the trading card game genre with tactical strategy to create a title that has strategy hiding in every corner. Grab your digital cards, build a deck and place them carefully on the grid based map as you challenge other players armies with your own. 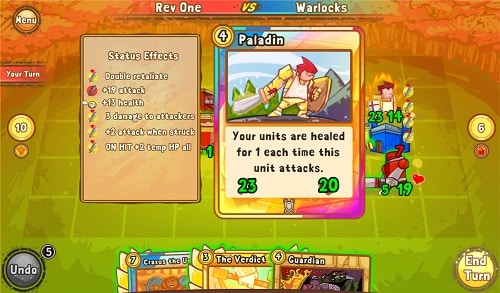 Set within a fantasy landscape Cards and Castles has a cartoon theme to its art style. Each match pits you against your enemy on a grid landscape which features your castle and two guard towers which once captured can give you a small bit of defence. Players must defend their castle while attempting to reduce the enemies castle hit points to 0.

In order to achieve this you’ll arm yourself with a 40 card deck which contains a mixture of units, spells and buildings that aligns with your strategy. Units are your main damage dealers while spells and buildings are more support orientated. At the start of each turn you’ll draw one of these cards and be able to play cards from your hand accordingly.

Each unit on the field can move and attack each turn given an opponent is in range which generally means an adjacent square unless it is one of the few ranged unit cards. Another unique feature of the game is the tack back button which allows you to redo your turn (limited use each game) if you make a mistake which keeps the experience more casual than comparable trading card games. 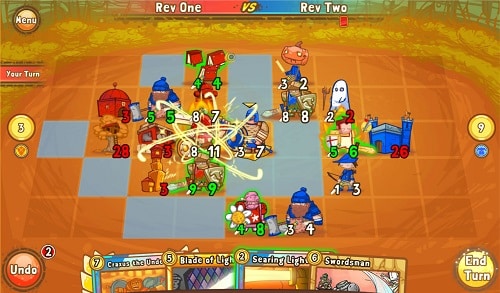 Matches can take around 15 minutes with the victor generally being the player that can maintain control of the game board and keep their opponent on the back foot, a well timed lucky card draw also helps matters.

Additional features include a vast single player campaign to enjoy, faction based cards and card crafting which round out this impressive trading card game title.

Games Finder is a Steam Curator and featured in the aggregate review scores data of MobyGames and Neoseeker.
FEATURED ON
Games Like Clash Royale, Games Like Deck Heroes, Games Like Hearthstone, Games Like Plants vs Zombies, Games Like Yugioh
LEAVE A REPLY Cancel Reply