Control Gabriel through a number of 3D environments as you use your devastating melee attacks on enemies while solving puzzles in Castlevania: Lords of Shadow. Primarily an action-adventure game the story follows your quest to defeat the Lords of Shadow and revive your wife. 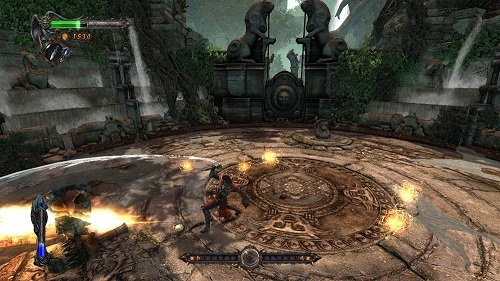 Intended as a reboot of the popular franchise there are some elements of the Castlevania franchise but also many fresh ideas. This keeps some of the nostalgia of long time fans but doesn’t keep it away from newcomers that want to explore Castlevania for the first time.

In terms of story the game closely follows Gabriel Belmont as Earth’s alliance with the Heavens comes under threat from a dark force which leads to souls of the deceased being trapped and evil creatures attacking people across the land. As a knight in the Brotherhood of Light Gabriel has the power to defeat these dark foes but also fights for the revenge and salvation of his wife who was murdered by the dark power.

Your wife is central to your adventure as a guiding light that will take you across the ravished land to meet various characters (including Patrick Stewart as Zobek) and obtain the pieces of the God Mask to bring her back from the dead.

Lords of Shadow belongs to the third person action adventure genre and while it doesn’t do much to re-invent the genre it does feature high quality gameplay with one or two interesting additions such as the retractable chain whip known as the Combat Cross.

Like similar games in the genre combat is very combo focused. Castlevania: Lords of Shadow does a particularly good job of slowly unlocking these so you never feel overwhelmed and constantly have that sense of progression that you need in an action game. Progression also comes through upgrading your weapons and the magic system which allows you to create a more defensive or aggressive playstyle to suit your needs. 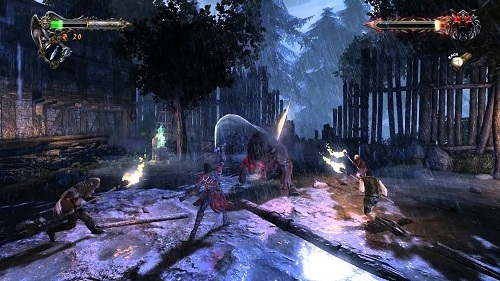 To create gameplay variety you’ll also enjoy platforming sequences and puzzles that appear often throughout the 50 game levels. These are mostly environmental based puzzles paired with a few brain teasers and exploration that offers powerful hidden items to boost stats.

With solid foundations and the Castlevania name Lords of Shadow is a win that is well worth the hours you’ll put it into it. Die hard fans of the series probably won’t like the direction it takes though.

Games Finder is a Steam Curator and featured in the aggregate review scores data of MobyGames and Neoseeker.
FEATURED ON
Games Like Devil May Cry, Games Like Dynasty Warriors, Games Like God of War, Games Like Shadow of the Colossus
LEAVE A REPLY Cancel Reply