Taking you into a post-apocalyptic landscape with an endless array of parts to customise your own vehicle is Crossout, a game that resembles Mad Max in design as you engage in vehicle on vehicle combat (PvE and PvP). 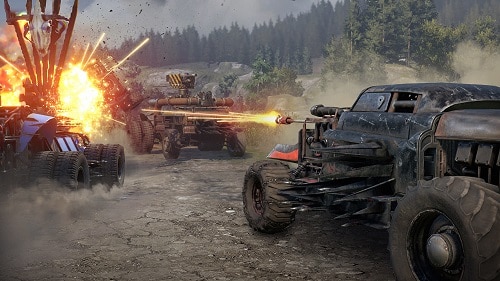 Set 20 years after a disaster that has left that world ravaged by a worldwide disease the game features several factions fighting over the remaining resources as some aim to bring humanity back while others are doing everything they can to stop that from happening.

Vehicles are central to the combat within Crossout with players earning reputation with the games factions that each specialise in a different type of vehicle tactics. With each game and mission you’ll earn rewards to be invested into your customised vehicle to further increase your potency on the large game maps. Without traditional roles or classes players can turn their parts into anything they desire.

Parts mostly include weapons, armour and hardware all of which later your vehicle in different ways and potentially alter the dynamics of your car, making handling easier or resulting in a car that flips easily. Weapons include melee, machine guns, auto cannons, rockets and missiles which offers plenty of variety. While hardware can give you special abilities such as boosts, invisibility, radars and engines. Crossout also includes a range of visual customisation options to truly make your vehicle your own. 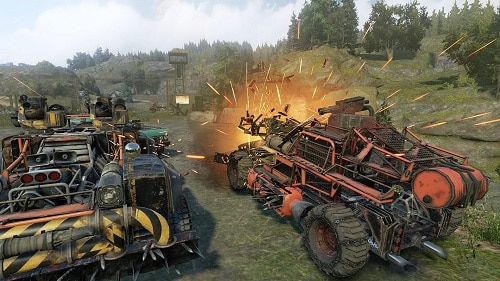 Obtaining parts for your new Crossout vehicle is centred around playing battles that have two teams of players take to massive maps in an attempt to eliminate each other while also capturing points or other tasks that varies with game mode. Players are matched based on a formula of their vehicle strength (tilted towards weapon strength) so games are never unfair.

Crossout also includes AI variations of game modes for newer players to farm and practice. Further community feel is injected by allowing players to purchase rarer pieces from other players and the ability to share your vehicle creations for others to build provided they have the parts and currency available.

Games Finder is a Steam Curator and featured in the aggregate review scores data of MobyGames and Neoseeker.
FEATURED ON
Games Like Mad Max, Games Like War Thunder, Games Like World of Tanks
1 COMMENTS
LEAVE A REPLY Cancel Reply